Spoiler is slang for any element of any summary or description of any piece of fiction that reveals any plot element which will give away the outcome of a dramatic episode within the work of fiction, or the conclusion of the entire work. It can also be used to refer to any piece of information regarding any part of a given media. Because enjoyment of fiction sometimes depends upon the dramatic tension and suspense which arises within it, the external revelation of such plot elements can "spoil" the enjoyment that some consumers of the narrative would otherwise have experienced.

The words "spoiler alert" in full capitals is usually used to warn readers of a spoiler.

The term spoiler was introduced in the early days of the internet, on the internet, and is often associated with specialist internet sites and in newsgroup postings. Early rules of netiquette insisted that spoilers could and should be normally avoided, but if the posting of "spoiling" information was unavoidable, it be preceded by a warning ("SPOILER!"), or the spoiler itself has to be masked so that it can not be visible to any but those keen for details and not fazed at the thought of such potentially plot-revealing information. Sometimes, these warnings are omitted, accidentally or deliberately (see below), and some unwitting readers have had literature, films, television programmes and other works that they were looking forward to experiencing "spoiled".[1]

There is among internet users a socially unique but pointedly expressed insistence on being protected from material considered to include "spoiler" information by website operators or forum moderators, even in the internet version of settings where such material has conventionally and historically appeared, such as discussion groups or literary reviews. As a result of this level of objection to spoilers, trolls may post them purely for their own pleasure – finding amusement in believing they are completely ruining a narrative experience for others. On reputable websites, these can be reported to moderators and such posts taken down, the posters blacklisted, but only after the fact. Conversely, many who wish to discuss a fictional work in depth, including the outcomes of events and the handling of the narrative resolution, feel compelled to avoid participating on public websites altogether, set up "closed" websites to exclude those who are sensitive about spoilers, or unilaterally blog at the expense of public exchange. The appearance of spoilers on an internet website is not considered a violation of terms and conditions by any ISP.

On Usenet, the common method for obscuring spoiler information is to precede it with many blank lines known as 'spoiler space' – traditionally enough to push the information in question on to the next screen of a 25-line terminal. A simple cipher called ROT13 is also used in newsgroups to obscure spoilers, but is rarely used for this purpose elsewhere.

Some producers actively seed bogus information in order to misdirect fans. The director of the film Terminator Salvation orchestrated a "disinformation campaign" where false spoilers were distributed about the film, in order to mask any true rumors about its plot.[2]

Wikipedia discloses spoilers in its articles without giving advance warning that spoilers in advance. Matthew Prichard, the grandson of Agatha Christie, criticized Wikipedia for giving away spoilers in the play "The Mousetrap". Andrew Jarecki, the producer of Catfish, a documentary, argued that Wikipedia should have spoiler alerts. The plot of Catfish had been posted on Wikipedia before its theatrical release, because the film had been aired at the 2010 Sundance Film Festival. Jay Walsh, a Wikimedia Foundation spokesperson, said that Wikipedia is intended to be an exhaustive knowledge source, so it would have spoilers.[3]

In print or other media 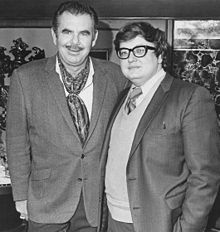 One of the first print uses of the terms was in the April 1971 issue of National Lampoon.[4] An article entitled "Spoilers," by Doug Kenney, lists spoilers for famous films and movies.

The characters in movies do not always do what we would do. Sometimes they make choices that offend us. That is their right. It is our right to disagree with them. It is not our right, however, to destroy for others the experience of being as surprised by those choices as we were. A few years ago, I began to notice "spoiler warnings" on Web-based movie reviews -- a shorthand way of informing the reader that a key plot point was about to be revealed. Having heard from more than a few readers accusing me of telling too much of the story, I began using such warnings in my reviews.

Ebert used two spoiler warnings in the article, saying "If you have not yet seen Million Dollar Baby and know nothing about the plot, read no further" and later said, "Now yet another spoiler warning, because I am going to become more explicit." Ebert discussed six films in the article and mentioned how many critics handled The Crying Game and also noted a detail about the film The Year of Living Dangerously. Ebert also mentioned two films alongside Million Dollar Baby.[5]

Ebert additionally criticized two commentators, Rush Limbaugh and Michael Medved (the latter of whom "for a long time been a political commentator, not a movie critic"), for deliberately revealing the ending of the movie due to a moral disagreement with the lead character's life decision. "[S]hould no movie be allowed to consider [the moral issue]?" Ebert asked. "The separation of church and state in America was wisely designed to prevent religions from dictating the personal choices of those who do not share the same beliefs."[5]

In an interview about his Dark Tower series (appearing in issue #4 of the 2007 Marvel Comic adaptation The Gunslinger Born), Stephen King was asked if there are spoilers in the first few novels that would ruin someone's experience of the comic. "There are no spoilers!", King replied, "You might as well say 'I'm never gonna watch Wizard of Oz again because I know how it comes out'".

The 2008 Doctor Who two-part story Silence in the Library/Forest of the Dead introduced the concept of "spoilers" within the story's time travel narrative, with the enigmatic character River Song using the term to refer to her foreknowledge of future events. This use continued through her subsequent appearances in The Time of Angels/Flesh and Stone and The Impossible Astronaut/Day of the Moon. The term is often used whilst River Song is consulting a diary charting her encounters with The Doctor as due to the vagaries of time travel they keep meeting in the wrong order. The executive producer of Doctor Who Steven Moffat expressed disappointment with fans who reveal spoilers after a pirate copy of The Impossible Astronaut was made available online prior to the episode's first television broadcast.

Comedian Daniel Tosh frequently gives spoilers on recently released films on his show, Tosh.0. His segment, "Spoiler Alert", is an impromptu take on the plot of each film.