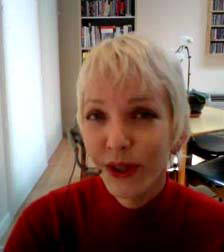 Jane Hamsher (born , ) is an American , , and liberal . She produced the major motion picture "" and founded the popular progressive blog "Firedoglake". She has also contributed to .

Hamsher, born in but raised in , graduated from the with a master's degree in film production. At USC, she became friends with , and the two were able to secure an option, with a loan from Hamsher's mother, on "Natural Born Killers." "Killers" was still an unknown at the time. Hamsher had an uncredited cameo in the film as a female demon.

In 1997, Hamsher wrote "Killer Instinct", a tell-all book about her experiences making the film. "Killers" director , in the , called the book "hurtful and insulting" and advised Hamsher to "keep (her) mouth shut and eyes open." Fact|date=February 2007 In the book, Hamsher details a fraud lawsuit against the filmmakers brought by a friend of Tarantino. The attorney who filed the fraud case, Thomas Ferlauto, unsuccessfully sued Hamsher for defamation. [cite web
url=http://online.ceb.com/CalCases/CA4/74CA4t1394.htm
title=Ferlauto v. Hamsher (1999) 74 CA4th 1394
publisher=Superior Court of Los Angeles County
date=
last=Lager
first=Marvin
accessdate=2007-01-22]

Hamsher and Murphy also produced "Apt Pupil", "", and "From Hell".

Hamsher graduated to her own hosting in late 2005, expanding into a group blog, with contributors ReddHedd Christy Hardin Smith, TRex, Pachacutec, and Siun. Hamsher and Smith have both made media appearances as a result of the blog. FDL is now published using and allows limited commenting capabilities, without the features found on more robust community sites such as . Volunteer moderators or an automatic spam filter may block comments. Almost all threads run to hundreds of comments.

Hamsher expresses her own views strongly in her blog entries, raising comments in support and comments opposed to such "free speech." For example, infuriated by caricatures on the cover of "Women Who Make the World Worse", in her entry of January 12, 2006, entitled "Why Is a Dangerous Bitch," referring to the book's conservative author, Hamsher concludes: "The bitch is dead meat."

Hamsher and others blogging for Firedoglake live-blogged the Scooter Libby trial, with Hamsher having been given a press pass for FDL to be in the actual courtroom.

Hamsher supported Democrat in his successful run for the Democratic nomination, and failed bid for the U.S. Senate, against incumbent senator , whose support for the and other Bush policies drew the ire of progressive Democrats. Although Hamsher was not on the campaign staff, she was among several bloggers who traveled with Lamont's campaign, and promoted Lamont's candidacy and helped raise money for him through her blog.

Hamsher came under fire from the Lieberman campaign after she posted a ped picture of a d Lieberman embracing in her blog and her column on the Huffington Post. The Lieberman campaign believed that the photo was racist and offensive. In a statement, Joe Lieberman called the photo "one of the most disgusting and hurtful images that has been used in American history, it's deeply offensive to people of all colors, and it has absolutely no place in the political arena today." Lieberman further demanded that Lamont prohibit Hamsher from traveling with his campaign and to refuse any money that Hamsher may have raised for him.

Questioned about the photo and his campaign's connections to Hamsher, Lamont responded "I don't know anything about the blogs. I'm not responsible for those. I have no comment on them." A spokesman for Lamont called the photo "offensive and inappropriate."

Hamsher took down the photo after receiving a request from the Lamont campaign, and later made a post on her blog apologizing "to anyone who was genuinely offended by the choice of images," but attacked Lieberman for using the graphic to score political points. [Jane Hamsher, [http://www.firedoglake.com/2006/08/02/about-that-graphic/ "About that graphic,"] "Firedoglake" , , accessed , .]

After Klein had backed away from the central allegations of his article, commenting "I may have made a mistake in my column this week about the FISA legislation passed by the House", Painton was contacted by Hamsher to ask "what the editing process was, and how a piece with so many errors made it into print." Painton reportedly replied "That assumes there are any errors" and immediately hung up on Hamsher

Hamsher was diagnosed with for the third time in December 2006 at the age of 47.