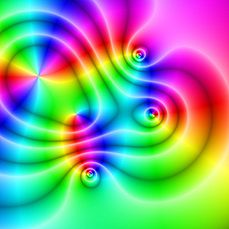 Murray R. Spiegel described complex analysis as "one of the most beautiful as well as useful branches of Mathematics". 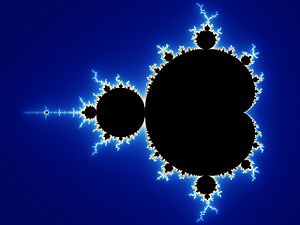 The Mandelbrot set, a fractal.

Complex analysis is one of the classical branches in mathematics with roots in the 19th century and just prior. Important names are Euler, Gauss, Riemann, Cauchy, Weierstrass, and many more in the 20th century. Complex analysis, in particular the theory of conformal mappings, has many physical applications and is also used throughout analytic number theory. In modern times, it has become very popular through a new boost from complex dynamics and the pictures of fractals produced by iterating holomorphic functions. Another important application of complex analysis is in string theory which studies conformal invariants quantum field theory.

In other words, the components of the function f(z),

can be interpreted as real-valued functions of the two real variables, x and y.

The basic concepts of complex analysis are often introduced by extending the elementary real functions (e.g., exponentials, logarithms, and trigonometric functions) into the complex domain.

One central tool in complex analysis is the line integral. The integral around a closed path of a function that is holomorphic everywhere inside the area bounded by the closed path is always zero; this is the Cauchy integral theorem. The values of a holomorphic function inside a disk can be computed by a certain path integral on the disk's boundary (Cauchy's integral formula). Path integrals in the complex plane are often used to determine complicated real integrals, and here the theory of residues among others is useful (see methods of contour integration). If a function has a pole or singularity at some point, that is, at that point where its values "blow up" and have no finite boundary, then one can compute the function's residue at that pole. These residues can be used to compute path integrals involving the function; this is the content of the powerful residue theorem. The remarkable behavior of holomorphic functions near essential singularities is described by Picard's Theorem. Functions that have only poles but no essential singularities are called meromorphic. Laurent series are similar to Taylor series but can be used to study the behavior of functions near singularities.

A bounded function that is holomorphic in the entire complex plane must be constant; this is Liouville's theorem. It can be used to provide a natural and short proof for the fundamental theorem of algebra which states that the field of complex numbers is algebraically closed.

If a function is holomorphic throughout a simply connected domain then its values are fully determined by its values on any smaller subdomain. The function on the larger domain is said to be analytically continued from its values on the smaller domain. This allows the extension of the definition of functions, such as the Riemann zeta function, which are initially defined in terms of infinite sums that converge only on limited domains to almost the entire complex plane. Sometimes, as in the case of the natural logarithm, it is impossible to analytically continue a holomorphic function to a non-simply connected domain in the complex plane but it is possible to extend it to a holomorphic function on a closely related surface known as a Riemann surface.

All this refers to complex analysis in one variable. There is also a very rich theory of complex analysis in more than one complex dimension in which the analytic properties such as power series expansion carry over whereas most of the geometric properties of holomorphic functions in one complex dimension (such as conformality) do not carry over. The Riemann mapping theorem about the conformal relationship of certain domains in the complex plane, which may be the most important result in the one-dimensional theory, fails dramatically in higher dimensions.