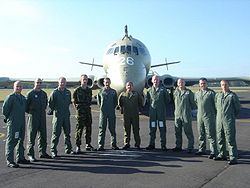 The Lockheed Martin Fincastle Maintenance Trophy was first introduced during Fincastle 1996, which was held in New Zealand. It was felt the competition would strengthen relations between the competing countries, allowing them to learn from each other as well as involving the maintenance teams in the competitive spirit of Fincastle . It is designed to foster relations among the four competing nations (RAF, RCAF, RNZAF and RAAF) and encourage learning and sharing skills in a competitive atmosphere.

The competition runs in parallel to and is intrinsically linked to the Fincastle Competition, which the aircrew compete for. The competition is judged by a team of Senior Non-Commissioned Officers SNCOs, one from each nation, led by an Engineering Officer from the host country. Teams are examined on their flight line operations, the quality of their support elements, engineering skills and a team interview.