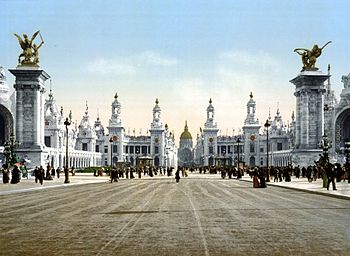 Pont Alexandre III in Paris and the Trinity Bridge in St Petersburg remain two symbols of the Franco-Russian Alliance.

The Franco-Russian Alliance was a military alliance between the French Third Republic and the Russian Empire that ran from 1892 to 1917. The alliance ended the diplomatic isolation of France and undermined the supremacy of the German Empire in Europe. France would remain the principal ally of Russia until 1917, from an economical, financial and military point of view.

The 1882 Triple Alliance of Germany, Austria-Hungary and Italy had left Russia vulnerable, while France had been diplomatically isolated since its defeat in the 1870 Franco-Prussian War and the subsequent policies of Otto von Bismarck. Despite the political differences between France, a republic, and Russia, an absolute monarchy, relations between the two countries rapidly improved.

From 1888, Russia was provided with cheap loans floated on the Paris Bourse, essential to rebuild the technologically deficient Russian military. In 1891, the French Fleet visited the Russian naval base at Kronstadt and was warmly welcomed by Tsar Alexander III. This visit marked the first time La Marseillaise was played on an official occasion in Russia; to play it previously had been a criminal offence.[1]

The new German Emperor Wilhelm II, after dismissing Bismarck, oversaw a change in the direction of German foreign policy. The secret Reinsurance Treaty with Russia was allowed to expire in 1890, despite Russian requests to renew it. After extensive negotiations, the Franco-Russian alliance was drafted August 17, 1892. It became final on January 4, 1894. The alliance was to remain in place as long as the Triple Alliance existed.

The Franco-Russian Alliance, along with the Anglo-Russian Entente and the Entente Cordiale formed the so-called Triple Entente between the United Kingdom of Great Britain and Ireland, France and Russia.