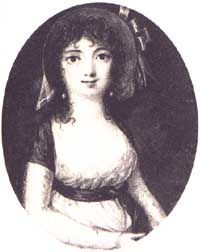 imagesize = 150px
caption = The only known image of Eliza Poe

Elizabeth Arnold Poe (1787–1811) was a English-born American actress and the mother of the American author .

Eliza Arnold was born to Henry and Elizabeth Arnold in in the spring of 1787.

Eliza debuted on the Boston stage at the age of nine, only three months after her arrival in the United States.

After her mother's death, Eliza stayed with the theater troupe. She followed the tradition at the time for actors to travel from city to city to perform for as long as several months before moving on. The actors, theaters, and audiences had a wide range of sophistication. One of the most impressive venues at which Eliza performed was the Chestnut Street Theater near Independence Hall in , , which seated two thousand.

In the summer of 1802, the age of fifteen, Eliza married Charles Hopkins.

The couple traveled throughout and the rest of the northeast, playing in various towns such as Richmond, Philadelphia, and at an outdoor summer theater in before finally settling in Boston. They stayed in Boston for three consecutive seasons of thirty weeks each in a theater that fit an audience of about one thousand.

The family relocated to in the summer of 1809. Eliza had often been praised for her acting ability while David's performances were routinely criticized harshly, possibly due to his own .

Friends and fellow actors Mr. and Mrs. Luke Usher (the name may have inspired Poe's tale "" [Allen, Hervey. "Israfel: The Life and Times of Edgar Allan Poe". New York: Farrar & Rinehart, Inc., 1934: 683.] ) took care of the children during Eliza's illness and many in the Richmond area took an interest in her health. On November 29 of that year, the Richmond Theater announced a benefit performance on her behalf. A local publication, the "Enquirer", reported her need for help: "On this night, "Mrs. Poe", lingering on the bed of disease and surrounded by her children, asks your assistance and "asks it perhaps for the last time".

Eliza finally died on Sunday morning, December 8, 1811, at the age of twenty-four

After her death, her three children were split up. William Henry Leonard Poe lived with his paternal grandparents in Baltimore, Edgar Poe was taken in by John and Frances Allan in Richmond, and Rosalie Poe was adopted by William and Jane Scott Mackenzie in Richmond.