The Secret of the Unicorn

The Secret of the Unicorn 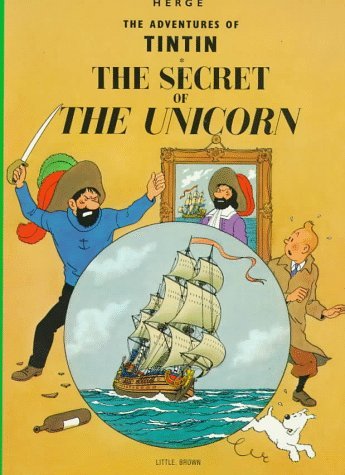 "The Secret of the Unicorn" ( _fr. Le Secret de la Licorne) is one of "", a series of classic comic-strip albums, written and illustrated by Belgian writer and illustrator , featuring young reporter Tintin as a hero. "The Secret of the Unicorn" is the first part of one of the four multi-book stories in the Tintin series, the story continuing in ""

"The Secret of the Unicorn" is the eleventh in the series of "".

There is an amazing epidemic of wallet-snatchings around . - who, during the course of the story, eventually lose their wallets by the dozens to the thief - look for the culprit at the Old Street Market where they meet Tintin. Tintin buys a boat model of an old for , but, as he does, two men try to haggle it off him. The first is a Mr. Ivan Ivanovitch Sakharine, and the second is later revealed to be Barnaby. Sakharine calls on Tintin at his flat later, seeking to convince him -unsuccessfully- to sell his ship, but leaves his card. A little while later, the mainmast is broken by Snowy, and Tintin repairs it.

When the Captain visits Tintin, he sees the ship and reacts with astonishment. Haddock takes Tintin back to his apartment and shows him a portrait of one of his , Sir Francis Haddock, the captain of a 17th century naval vessel. In its background is the very same ship, called "the "Unicorn" (a French ship in the original; in the English translation part of the fleet of , and a has been inserted as the flag flown by the "Unicorn"). When Tintin and the Captain return to Tintin's flat, they find that the model boat has been stolen. Tintin visits Sakharine, accusing him of having stolen it. While he discovers an identical ship in Sakharine's collection, it is evidently a different one, for in this case, the mast has not been broken. The ship carries the letters "UNICORN" on the back as well. When Tintin returns home, he finds that his flat has been ransacked, and while cleaning up he finds a mysterious parchment. He realizes that it must have been hidden within the mainmast broken by Snowy, and subsequently rolled out onto the floor. He guesses that the parchement holds the clue to finding treasure and rushes back to the Captain's flat.

The Captain, meanwhile, has taken out some heirlooms that had belonged to his great ancestor: a , a , and a journal which tells of how in 1676 he defeated the s led by . Haddock eagerly reads it out aloud to Tintin, sometimes getting a bit carried away while describing the battle scenes. Tintin himself is so taken in by the story that he does not even bother to take off his raincoat.

The pirate Red Rackham had just stolen some diamonds from a Spanish naval vessel when he engaged Sir Francis Haddock in battle in the . Although the volleys fired by Sir Francis destroyed Rackham's much smaller ship, the pirates managed to overpower Sir Francis's sailors; all but Sir Francis were either killed or forced to walk the plank. Red Rackham's crew took over the "Unicorn", stowing the jewels and treasure on board. Sir Francis escaped, killed Red Rackham in hand-to-hand combat, and escaped after igniting a long fuse in the munitions hold. As Sir Francis rowed to the safety of an uninhabited island nearby, the "Unicorn" exploded, killing the rest of the pirates.

The boat model which was stolen is just one of three constructed by Sir Francis which hold three which, when placed together, will give the treasure's location. Tintin is later kidnapped by the Bird Brothers, two unscrupulous antique dealers who believe that he possesses the parchments. They are behind the theft of Tintin's model, having discovered the second parchment and have figured out that they needed all three to decode the clue to the treasure's location. Tintin later escapes , a country estate owned by the Bird Brothers. The parchments themselves, however, were stolen by a c specializing in wallets (the same pickpocket pursued by , who is eventually cornered with Tintin's help).

By the end of the story, Tintin and Haddock have the parchments, and discover where they will find the treasure, by combining the parchments to read coord|20|37|42|N|70|52|15|W|. The sequel, "", continues the story.

"The Secret of the Unicorn" was Hergé's personal favourite of all the Tintin albums until the completion of "" in 1960.

There was a historic pirate with a similar name to Red Rackham, John Rackham, best known as the captain of the ship on which sailed the women pirates and . John Rackham was also known for his bright clothes.