Crypto-Calvinism is a term for Calvinist influence in the Lutheran Church during the decades just after the death of Martin Luther (1546). It denotes what was seen as a hidden ("crypto" from "kryptein", Greek for "to hide") Calvinist belief, i.e. the doctrines of John Calvin, by members of the Lutheran Church. The term applied to those Germans, who secretly held or were accused of holding the Calvinist doctrine of the Eucharist.

The term crypto-Calvinist in Lutheranism was preceded by terms Zwinglian and Sacramentarian.

Also, Jansenism has been accused of crypto-Calvinism by Roman Catholics. 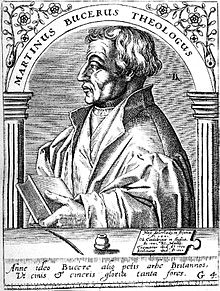 Martin Bucer, one of the Sacramentarians

Martin Luther had had controversy with "Sacramentarians", and he published against them, for example, in his The Sacrament of the Body and Blood of Christ—Against the Fanatics and Confession Concerning Christ's Supper. Philipp I of Hessen arranged the Marburg Colloquy in 1529, but no agreement could be reached concerning the doctrine of Real Presence. Subsequently, the Wittenberg Concord of 1536 was signed, but this attempt at resolving the issue ultimately failed.

While Lutheranism had weakened after the Schmalkaldic War and Interim controversies, the Calvinist Reformation on the other hand was spreading across Europe. Calvinists wanted to help Lutherans to give up "remnants of popery", as they saw it. By this time Calvinism had expanded its influence to southern Germany (not least because of the work of Martin Bucer), but the Peace of Augsburg (1555) had given religious freedom in Germany only to Lutherans, and it was not officially extended to Calvinists until the Treaty of Westphalia in 1648. While Zwinglians 1549 had accepted Calvin's much less radical view of the Christs presence in Lord's Supper (The Eucharist was to be more than a sign; Christ was truly present in it, and was received by Faith), Calvinist theologians thought, that Lutheran theology also had changed its view to Real Presence, because the issue had not been discussed anymore, and Philippist teaching gave some justification to this conclusion.

When Luther died in 1546, his closest friend and ally Philipp Melanchthon became the leading Lutheran theologian of Protestant Reformation. He was by training not a theologian but rather a classics scholar, and his theological approach became more or less irenic both toward Catholicism and toward Calvinism, which was followed by his disciples called Philippists. Towards Reformed doctrine of eucharist this had become evident already in 1540, when Melanchthon had published another version of the Augsburg Confession ("Variata"), in which the article on the Real Presence differed essentially from what had been expressed in 1530. The wording was as follows:

The altered edition was made the basis of negotiations with the Roman Catholics at the Colloquies of Worms and Ratisbon in 1541, and at the later Colloquies in 1546 and 1557. It was printed (with the title and preface of the Invariata) in Corpus Doctrinae Philippicum in 1559; it was expressly approved by the Lutheran princes at the Convention of Naumburg in 1561, after Melanchthon’s death, as an improved modification and authentic interpretation of the Confession, and was adhered to by the Melanchthonians and the Reformed even after the adoption of the Book of Concord (1580). Also John Calvin signed it. Still it had no legal status given by Peace of Augsburg, which belonged to original version.

The Real Presence for Luther was beyond any doubt: The host consecrated is Christ’s body, while for Melanchthon the words spoken during the establishment by Jesus only promised that his body and blood were received [2]. Melanchthon rejected the doctrine of ubiquity and spoke about the personal presence of Christ in the Eucharist, without any further definitions. The theology of Melanchthon's School in general was opposed by Lutherans, who were called Flacians by their opponents. Later they were called "Gnesio-Lutherans". Matthias Flacius had been the leader against Philippism in earlier controversies, but even Gnesio-Lutherans did not pay much attention to the doctrine of the Eucharist, until Joachim Westphal began to write again in 1552 against those, who deny Real Presence. When John Calvin himself answered to him in 1555, there was open, inter-Protestant controversy about Eucharist, which involved on the side of the Reformed Lasco, Bullinger, Ochino, Valerandus Polanus, Beza, and Bibliander; on the side of the Lutherans Timann, Heshusius Paul von Eitzen, Schnepff, E. Alberus, Gallus, Flacius, Judex, Brenz, and Andreä. The Colloquy of Worms in 1557 was an attempt to achieve unity among Lutherans, but it failed. During these controversies the State Church of the Palatinate, where Philippism predominated, changed from the Lutheran to the Reformed faith under Frederick III (1560). The Heidelberg Catechism, which was written there, was also meant to form bridges between Lutherans and Reformed in Germany – the other of its authors, Zacharias Ursinus, was Melanchthon's disciple.

There were a number of local controversies, like the Saligerian Controversy in Lübeck in 1568 and 1574, in Rostock in 1569, controversy in Bremen in 1554 involving Melanchthon's friend Albert Rizaeus Hardenberg, and controversy in Danzig in 1561/62.

The earliest of these incidents had happened with Simon Wolferinus, pastor of St. Andreas at Eisleben in 1543, while Martin Luther still lived. The controversy was also about eucharistic adoration, which was defended by "Gnesio-Lutherans" and also many other Lutherans outside of the Flacian party, like Johann Hachenburg, Andreas Musculus, Jakob Rungius and Laurentius Petri. This belief was shared also by Nikolaus Selnecker, Martin Chemnitz and Timotheus Kirchner. A feast of victory of genuine Lutheranism over Philippism was celebrated in one of the German principalities with prayers for the preservation of the doctrine of justification and the doctrine of the adoration of the Sacrament [3]. Paul Eber was one of the Philippistic main opponents of eucharistic adoration.

Controversy about crypto-Calvinism inside of Lutheran Church divides into two stages: 1552–74 and 1586–92. It was the most bitter of all controversies after Luther's death.

Crypto-Calvinists had gained the ecclesiastical power in Saxony during the rule of elector Augustus, but the unquestionably Calvinistic work of Joachim Cureus, Exegesis perspicua de sacra cœna (1574), and a confidential letter of Johann Stössel which fell into the elector's hands opened his eyes. The heads of the Philippist party were imprisoned and roughly handled, and the Torgau Confession of 1574 completed their downfall (Caspar Peucer, not incidentally Melanchthon's son-in-law, was captured and jailed in the Königstein Fortress for Crypto- Calvinism for 12 years). By the adoption of the Formula of Concord their cause was ruined in all the territories which accepted it, although in some others it survived under the aspect of a modified Lutheranism, as in Nuremberg, or, as in Nassau, Hesse, Anhalt, and Bremen, where it became more or less definitely identified with Calvinism.

Crypto-Calvinism raised its head once more in Electoral Saxony in 1586, on the accession of Christian I., but on his death five years later it came to a sudden and bloody end with the murder of Nikolaus Krell as a victim to this unpopular revival of Calvinism.

In Denmark crypto-Calvinism was represented by Niels Hemmingsen [4]. In Sweden, crypto-Calvinism, which was resisted by Archbishop Olaus Martini, was supported by Duke Charles, uncle of Catholic king Sigismund III Vasa. Finally Calvinism was banned at Uppsala Synod 1593 by initiative of Bishop of Turku, Ericus Erici Sorolainen [5] together with Bishop Olaus Stephani Bellinus.

Following the Prussian Union and other Evangelical unions in Germany, the Evangelical Church in Germany is an umbrella organisations of Lutheran, Union and Reformed church bodies. Leuenberg Concord (1962) has made similar irenic solution between Lutheran and Calvinist doctrines, while Confessional Lutheran church bodies still continue to see Calvinist teaching on Lord's Supper as a danger to Lutheran faith and identity.