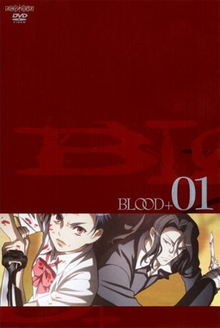 Blood+ is an animated television series created by Production I.G. It premiered in Japan on October 8, 2005 on MBS/TBS, and continued with episodes every week (except on December 31, 2005) until September 23, 2006.[1][2] The series simultaneously aired on Animax, Sony's Japanese anime satellite channel, with its networks in Southeast Asia and South Asia airing the series later. It was directed by Junichi Fujisaku and features original character designs by Chizu Hashii. Fifty consecutive episodes were aired spanning four distinct seasons. Each season is differentiated by opening and ending themes from a variety of artists, with the final episode using the season one ending theme.

Through Sony's international division, Blood+ is licensed for distribution in multiple regions, including Region 1.[3] It began airing in dubbed English in the United States on March 11, 2007 as part of the Adult Swim block of Cartoon Network, where it ran until its conclusion on March 23, 2008.[4] The first Region 1 DVDs were released on March 4, 2008, with a simultaneous release of a single five episode volume and a twenty-five episode box set.[5]

The series was first released to Region 2 DVD in Japan by Aniplex in thirteen volumes. The first volume contained two episodes, and each subsequent volume contained four more. The first volume was released December 21, 2005 and the final on December 29, 2006.[6] All of the volumes have Japanese language tracks with no subtitles. The first Region 1 DVDs were released on March 4, 2008, with a simultaneous release of a single five episode volume and a twenty-five episode box set.[5]