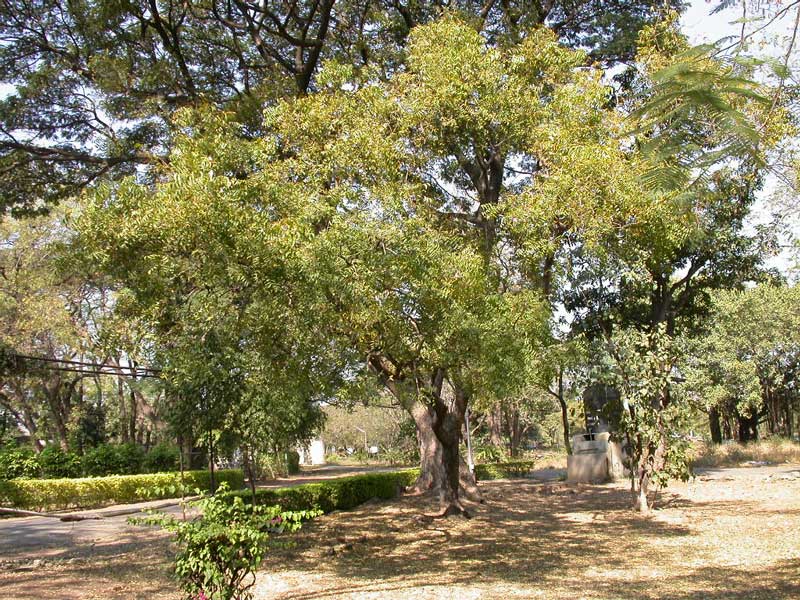 Neem ("Azadirachta indica", syn. "Melia azadirachta" L., "Antelaea azadirachta" (L.) Adelb.) is a in the mahogany family . It is one of two species in the genus "", and is native to , , , and growing in and semi-tropical regions. Other vernacular names include "Azad Dirakht" (Persian), DogonYaro (), Margosa, Neeb (Arabic), Nimtree, Nimba (), Vepu, Vempu, Vepa (Telugu), Bevu in Kannada, Veppam in (Tamil),arya veppu in malayalam and Indian-lilac. In East Africa it is also known as "Mwarobaini" (), which means "the tree of the 40"; it's said to treat 40 different diseases.

The trunk is relatively short, straight and may reach a diameter of 1.2 m. The bark is hard, fissured or scaly, and whitish-grey to reddish-brown. The sapwood is greyish-white and the heartwood reddish when first exposed to the air becoming reddish-brown after exposure. The root system consists of a strong taproot and well developed lateral roots.

The alternate, leaves are 20-40 cm long, with 20-31 medium to dark green leaflets about 3-8 cm long. The terminal leaflet is often missing. The petioles are short. Very young leaves are reddish to purplish in colour. The shape of mature leaflets is more or less asymmetric and their margins are dentate with the exception of the base of their basiscopal half, which is normally very strongly reduced and cuneate.

The is a glabrous olive-like which varies in shape from elongate oval to nearly roundish, and when ripe are 1.4-2.8 x 1.0-1.5 cm. The fruit skin (exocarp) is thin and the bitter-sweet pulp (mesocarp) is yellowish-white and very fibrous. The mesocarp is 0.3-0.5 cm thick. The white, hard inner shell (endocarp) of the fruit encloses one, rarely two or three, elongated s (kernels) having a brown seed coat.

The neem tree is very similar in appearance to the , all parts of which are extremely poisonous.

The neem is a tree noted for its drought resistance. Normally it thrives in areas with sub-arid to sub-humid conditions, with an annual rainfall between 400 and 1200 mm. It can grow in regions with an annual rainfall below 400 mm, but in such cases it depends largely on the ground water levels. Neem can grow in many different types of , but it thrives best on well drained deep and sandy soils . It is a typical tropical/subtropical tree and exists at annual mean temperatures between 21-32 °C. It can tolerate high to very high temperatures. It does not tolerate temperature below 4 °C .Neem is a life giving tree in ,especially for the dry coastal southern districts. It is one of the very few shade giving trees that thrive in the drought prone areas. The trees are not at all delicate about the water quality and thrive on the merest trickle of water, whatever the quality be. In Tamil Nadu it is very common to see neem trees used as shade giving trees lining the streets or in most people's back yards. In very dry areas like Sivakasi, the trees are planted in large tracts of land, in whose shade fireworks factories function.

The active principles of the plant were brought to the attention of scientists in 1942 when Salimuzzaman Siddiqui, while working at the Scientific and Industrial Research Laboratory at Delhi University, for the first time extracted three bitter compounds from neem oil, which he provisionally named as nimbin, nimbinin, and nimbidin respectively. The seeds contain an extremely complex secondary metabolite .

In India, the tree is variously known as "Divine Tree," "Heal All," "Nature's Drugstore," "Village Pharmacy" and "Panacea for all diseases." Products made from neem have proven medicinal properties, being anthelmintic, antifungal, antidiabetic, antibacterial, antiviral, anti-infertility, and sedative. It is considered a major component in Ayurvedic medicine and is particularly prescribed for skin disease.
* All parts of the tree (seeds, leaves, flowers and bark) are used for preparing many different medical preparations.
* is used for preparing cosmetics (soap, shampoo, balms and creams), and is useful for skin care such as acne treatment, and keeping skin elasticity.
* Besides its use in traditional Indian medicine the neem tree is of great importance for its anti-desertification properties and possibly as a good carbon dioxide sink.
* Practictioners of traditional Indian medicine recommend that patients suffering from chicken pox sleep on neem leaves.
* Neem gum is used as a bulking agent and for the preparation of special purpose food (those for diabetics).
* Aqueous extracts of neem leaves have demonstrated significant antidiabetic potential.

Neem is a source of environment-friendly biopesticides.. The unique feature of neem products is that they do not directly kill the pests, but alter the life-processing behavior in such a manner that the insect can no longer feed, breed or undergo metamorphosis. However, this does not mean that the plant extracts are harmful to all insects. Since, to be effective, the product has to be ingested, only the insects that feed on plant tissues succumb. Those that feed on nectar or other insects such as butterflies, bees, and ladybugs hardly accumulate significant concentrations of neem products.

Uses in pest and disease control

Neem is deemed very effective in the treatment of scabies although only preliminary scientific proof exists which still has to be corroborated, and is recommended for those who are sensitive to permethrin, a known insecticide which might be an irritant. Also, the scabies mite has yet to become resistant to neem, so in persistent cases neem has been shown to be very effective. There is also anecdotal evidence of its effectiveness in treating infestations of head lice in humans. A tea made of boiled neem leaves, sometimes combined with other herbs such as ginger, can be ingested to fight intestinal worms.

The oil is also used in sprays against fleas in cats and dogs.

Neem and its association with Hindu festivals in India

The tender shoots and flowers of the neem tree are eaten as a vegetable in India. Neem flowers are very popular for their use in Ugadi Pachadi (soup-like pickle)which is made on Ugadi day in South India. A souplike dish called "Veppampoo Rasam" (translated as 'juice of neem flower') made of the flower of neem is prepared in Tamil Nadu. leaf or bark is considered an effective pitta pacifier due to its bitter taste. Hence, it is traditionally recommended during early summer in Ayurveda (i.e. month of as per which usually falls in month of March - April ). And during which is the New Year in the state of Maharashtra, we find an ancient practice of drinking a small quantity of Neem juice or paste on that day before starting festivities. Like many Hindu festivals and their association with some food to avoid negative side-effects of that season or season change, neem juice is associated with Gudi Padva to remind people of using it during that particular month or season to pacify summer pitta.

Neem is also used in parts of mainland , particularly in and (where it is known as "sadao" or "sdao"), Laos (where it is called "kadao") and Vietnam .Even lightly cooked, the flavour is quite bitter and thus the food is not enjoyed by all inhabitants of these nations, though it is believed to be good for one's health. Neem Gum is a rich source of protein.