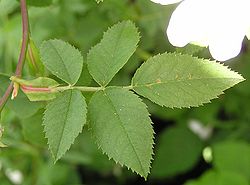 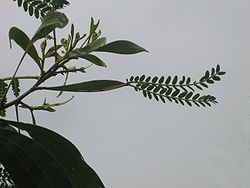 Acacia koa with phyllode between the branch and the compound leaves

In some plants, the petioles become flattened and widened, and the true leaves may become reduced or vanish altogether. These are known as phyllodes or phyllodia, or cladophylls. Thus, the phyllode comes to serve the purpose of the leaf. Phyllodes are common in the genus Acacia, especially the Australian species, at one time put in Acacia subgenus Phyllodineae. Sometimes, especially on younger plants, partially formed phyllodes bearing reduced leaves can be seen.

In Acacia koa, the phyllodes are leathery and thick, allowing the tree to survive stressful environments. The petiole allows partially submerged hydrophytes to have leaves floating at different depths; the petiole being between the node and the stem.

Petiole is pronounced /ˈpiːtɨoʊl/ and comes from Latin petiolus, or peciolus "little foot," "stem", an alternate diminutive of pes "foot." The regular diminutive pediculus is also used for "foot stalk".