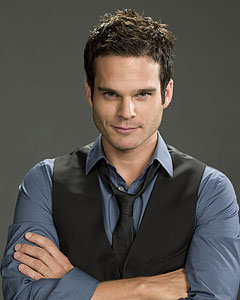 Kevin Fisher is a on the "", portrayed by Emmy Award-winning since . Kevin is the son of Tom () and () and the half-brother of (). He is currently married to (). Over the years Kevin has committed numerous crimes including statutory rape, attempted murder, arson, breaking and entering, stealing government money, assault, and computer hacking.

In , teenaged () meets mentally unstable predator Kevin Fisher in an on-line . Even though Kevin is much older than Lily, the two start dating and Kevin often persuads Lily to skip school to hang out with him at his place. He eventually convinces her to have sex with him. The () results in Kevin giving Lily chlamydia, a common .

(then played by ), Lily's best friend, hates Kevin and Lily's relationship and often told Kevin how she felt. In return, Kevin attempts to kill Colleen by locking her in the refrigerator at local , Gina's, and then setting it on fire. He is never found guilty for these crimes.

However, in , while working as a at Marilyn's Cabaret, Kevin is wrongly accused of electrocuting (). Desperate to avoid jail time, Kevin turns to brother Michael for help. They are soon joined by their mother, Gloria (then played by ) after Kevin runs away back home to Detroit fearing he would be sent to jail. Gloria decides to return with Kevin and Michael after Michael makes a deal with the police. Kevin is then sent to , where he is beaten to a pulp by cellmates because they know committed statutory rape. It was ultimately Lily's father, Neil () who finds the evidence to have him acquitted. It is some enemies of 's (John Enos) who electrocuted Brittany and framed Kevin. Kevin soon becomes obsessed with Lauren Fenmore (), a glamorous older woman, because she treats him so kindly. Kevin is heartbroken when he discovers that Lauren was only spending time with him in hopes that he would confess to his crimes. He threatens to commit . Michael talks Kevin out of killing himself, and he and Lauren agree to be friends. He and Gloria then move in with Michael and drive him crazy at every turn. Kevin is furious upon discovering that Michael is dating Lauren behind his back. This prompts him to challenge Michael to a boxing match where they compete for Lauren's love. During the match, Kevin finally releases all the anger he feels towards his abusive father and Michael apologizes for not being there for him more as they were growing up. Kevin eventually gets over his obsession with Lauren and becomes very happy for Michael and Lauren.

Later, Kevin befriends who has just returned to Genoa City from boarding school. To help boost Kevin's reputation, Daniel hires a guy named Alex to attack Lily so Kevin rescue her and regain his reputation. In exchange, Kevin agrees to put in a good word for Daniel to Mackenzie Browning, whom has recently befriended him. However, Alex takes the plan too far and slips Lily a date rape drug. Kevin ends up saving her anyway and Alex disappears. Lily and her family hesitantly thank Kevin. Alex then returns and threatens Daniel and Kevin. They then tell Michael and Daniel's mother Phyllis what they have done. In a heated confrontation between Alex, Daniel and Phyllis, Phyllis' boyfriend arrives and saves them. Alex leaves town. As Kevin rises to fame because of his daring rescue, he decides to tell Lily that he is responsible for the situation with Alex. She agrees not to tell her parents.

Kevin soon begins a flirtation with Mackenzie (then played by ). Mac is a very good friend to Kevin and persuades him to seek counseling and to become a better person. Kevin and his brother Michael win the lottery, and Kevin uses his share to enter a partnership with Mac and purchase Crimson Lights Coffee House from () and his wife, Sharon Newman (). While Mac appears to have slight feelings for Kevin, she is in love with Kevin's nemesis, ().

Both Kevin and Michael are shocked to discover that their mother has secretly been dating the wealthy John Abbott (Jerry Douglas). Gloria successfully manages to keep both her son's identities a secret from John and his kids Jack and Ashley until after she and John are married due to John's hatred for Michael and Kevin in particular (for trying to kill his granddaughter Colleen). Ashley then discoveres the truth and tells a furious John. However, John's opinion of Kevin improves after he saves John's life after he fell down the stairs and accidentally stabbed himself. Jack and Ashley then hire a nurse named Geita to care for him. A jealous Gloria asks Kevin to help get rid of her and he agrees only to find himself immediately attracted to her. He then discovers that she was just using him to get a green card to stay in the country. He then prayed on her supersticious beliefs and scared her away from Genoa City. Gloria and John reunite and John comes to accept Kevin and Michael as family. Just then Kevin's abusive father, "Terrible Tom" Fisher, returnes in , and Kevin is forced to relive the memories of the physical and emotional violence that Tom inflicted upon him as a child. Tom then gets involved with psychotic () in her mission to kill Lauren. Not realizing Sheila was intent on murder, Tom rescues Lauren as Sheila is about to blow up her and Michael's honeymoon yacht. Thinking Tom is responsible, Kevin's stepfather, John Abbott (Jerry Douglas), shoots him. Tom died at the hospital before he can tell Kevin and Michael that Lauren is still alive (she was later rescued by Paul Williams ()). After Tom is cremated, Kevin takes his remains and said good-bye to his father for good as he pours them down the drain.

In , Mac leaves town after a bad break up with J.T., and Kevin is left to run Crimson Lights alone. Kevin's mother, Gloria, convinces Kevin that he shouldn't settle for just selling coffee, but should try to get a job at . Kevin is then hired to run Jabot's website, and still owns and manages Crimson Lights.

Shortly after Mac left Kevin begins dating new Crimson Lights worker Jana Hawkes. Just as things seem to be going well, Alex returns to blackmail Kevin and Daniel about their involvement in his attack on Lily. His plan fails when Kevin, Gloria and Jana make a fake video that shows Kevin (disguised as Alex) attacking Jana to make it seem like he is attempting to rape her. Alex then leaves town. Kevin and Jana fall in love and are living together by the holidays. During their relationship Jana develops a strange fascination with the murder of PR woman Carmen Mesta, who has been found dead behind new club Indigo. She even makes a "hobby" out of keeping a scrapbook of Carmen's murder. In , Jana and Colleen appear to have been kidnapped and/or killed by (). However, this proves to be wrong, as Jana planned out the kidnappings. Jana "escapes" from the refrigerator where she and Colleen were held, and manages to get Kevin to the fridge, where she holds him and Colleen at bay with a taser while confessing to the murder of () and the kidnappings. Kevin is shocked, saying that he thought she loved him. Jana says she used Kevin and then fell for him. Jana then locks Kevin and Colleen in the fridge, and proceeds to set the building on fire and plants Kevin's drivers license (Colleen's license was inside of that) by Colleen's car, trying to make it look like Kevin kidnapped and attempted to kill Colleen in the same manner as he did years before, only he locked himself in there by mistake. After several unsuccessful breakout attempts, Kevin and Colleen pass out from the smoke. They are rescued by J.T. and Korbel, who fell for Jana's plan and are under the impression that Kevin kidnapped and attempted to murder Colleen. While Colleen lies in a coma, Kevin is arrested at the hospital as everyone (except his family) believed he had harmed Colleen, Jana, and Carmen. While being hauled off, a furious () punches him in the face. After being released on bail, Kevin and J.T. (who wanted him in jail) begin viewing security footage of the day of Carmen's murder. Jana had planted a fake video that makes it seem as if Kevin is dragging out Carmen's dead body. J.T. then hits Kevin on the head with a coffee pot, knocking him out. Just as this is happening Colleen wakes up and reveals the truth. After Kevin wakes up, the two forgive each other and become friends. J.T. is then arrested (but released shortly after, infuriating Kevin). Kevin then receives a call from Jana apologizing for her actions but Kevin vows to kill her if they ever met again.

When asks Kevin if her cousin Garrett can stay with him for a while, he reluctantly agreed. Actually "Garrett" is really Amber's ex-boyfriend Plum who is blackmailing her with nude photos. After continuously being threatened by Plum, Amber (along with Kevin and Daniel) discover him dead after an accidental fall. As Amber scrambles for the device containing the nude photos Plum had, the three stumble across a bag full of money. Since Kevin desperately needs cash to find Jana and exact revenge, he agrees they should all keep it. After both Kevin and Daniel's homes are broken into and Amber is kidnapped by the people in search of the money, they have no choice but to come clean. After Amber is rescued they are all arrested and released on bail. In the midst of all of this, Kevin teams up with Colleen to track down Jana after she begins emailing and calling him expressing how sorry she was. Kevin decides to play on her feelings for him to lure her back. He then deliberately smashes his car into a tree and ends up in the hospital. His plan works as Jana agrees to meet him in a nearby warehouse. He then pulls a gun on her and attempts to kill her, but Michael, Colleen and Daniel talked him out of it. As she is about to be arrested, Jana has a seizure and it is discovered that she has a brain tumor which may have been what caused her crazy behavior. At first, Kevin doubts her symptoms but eventually falls back in love with her, which leads him to blackmail Gloria about her involvement in the Glow-Again Scandal to help pay for Jana's surgery. After the surgery, it is revealed that 99% of the tumor was removed. As Kevin and Jana envision their life together, Jana worries that the tumor will come back and make her evil again. She then tells Kevin that they should not be together. But Kevin does receive some good news after Michael manages to get him, Daniel and Amber two years probation, community service and no jail time. No sooner does Kevin dodge one bullet, he can not resist helping his mother get revenge against Jack by leaking video footage of Jack admitting that he illegally owns Jabot as he is forbidden to purchase it after the tainted cream disaster (which was started by Gloria).

Kevin proposes to Jana on Thanksgiving Day. Although she initially says no, Kevin gives her more time to think about it. As he continues his campaign to free Jana, he is pleasantly surprised when A.D.A. suddenly drops the case and Jana is released from prison. Months later the two are married in an Ashram in Malibu. The guru who marries them turns out to be Michael's father (Michael Gross).