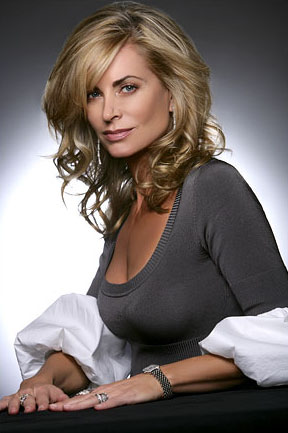 Ashley Suzanne Abbott (previously Lassiter, Newman, Bladeson, Howard, and Carlton) is a originally from the American "". Actress originated the role in 1982, departed in 1989 and returned from 1999 to 2007. During the ten years that Davidson was away, the part of Ashley was played by Brenda Epperson Doumani (1989-1996), then (1996-1999). The character began appearing on "" on , , once again played by Davidson, and both the actress and the character continued to make guest appearances on "Y&R". Davidson departed "B&B" on . The actress returned to "Y&R" on .

Fresh out of college, Ashley Abbott returned to Genoa City in 1982. One of three Abbott children abandoned by their mother, the "beauty" of the family, Ashley was the apple of her father's eye. Taking her spot in the family business, Ashley became a chemist at under the name Susan Ashley as a way to distract from the fact that she was an Abbott. After she earned the respect within the company, Ashley went on to use her real name and was appointed president of Jabot.

Ashley got the shock of her life when Brent Davis revealed on his death bed that he was her biological father. Devastated by the news, Ashley had an emotional breakdown, but was rescued and taken in by . Although only a handful of people - her mother Dina (), Jack (), Jill (), Katherine () and Victor () - knew the truth, Ashley vowed to keep her paternity a secret for fear of breaking John's heart.

Her time with Victor would be the beginning of their love story and of Ashley's feud with Nikki (). For years the three would find themselves in love, out of love, and threatened by each other. After her stay at the ranch, and Nikki and Victor divorced over her affair with Jack, Ashley and Victor fell in love. However, shortly after Ashley became pregnant, Victor and Nikki reconciled, leading Ashley to have an abortion. Not mentally stable, Ashley ended up in a mental institution and later returned to Genoa City with her father.

During her hospitalization, Ashley met her future husband, Stephen. However, their marriage would end soon after Stephen was stalked and murdered by a past mental patient. Her next tangle with love was with her sister's ex-husband (). Not wanting to hurt her sister, Ashley escaped to her cottage in the woods. Dealing with the pain of Nikki's marriage to Jack, Victor came to Ashley and the two married. However, as always, Victor's tie with Nikki was too strong and he and Ashley soon divorced. Ashley would then go on to have two more unsuccessful marriages: with Jabot photographer () and novelist ().

Fed up with love, Ashley took off for and returned to Genoa City pregnant. Determined to keep the baby's father a secret, Ashley accepted Brad's marriage proposal and his undying love for her and her unborn child. Ironically, and to Brad's dismay, Ashley revealed during her fight with breast cancer that Victor was the father of her daughter Abby (). Not only was Brad shocked, so was Victor after finding out that Ashley stole his sperm and was artificially inseminated. Although Brad and Ashley tried to salvage their marriage by having a child of their own, Ashley miscarried due to a car accident and the two divorced shortly after.

Her next battle would come when her father met and fell in love with Gloria Fisher (). With Jabot on the edge of bankruptcy, her personal life a mess, Ashley started dating Paul Williams () and soon found herself being charmed by Tom Callahan (). Little did Ashley know, Tom was actually "Terrible" Tom Fisher, who had been married to Gloria and abused her and her two sons, Michael () and Kevin (). After a series of blackmail attempts, lies were exposed and it was revealed that Tom was Gloria's husband. Fearing for his family's life, John Abbott shot and killed Tom, and Ashley took the blame for the crime. It wasn't long before John would recover from the shock and admit to the crime and was in turn sentenced to seven years in prison.

While dealing with the anguish of her father in prison, Ashley was faced with controversy after Gloria contaminated her new line of beauty cream. Even though Gloria was never found out, the damage she did to Jabot was immense. With Katherine now the company's new owner, the company was able to survive.

Ashley's biggest devastation came with the death of her father shortly before he was to be pardoned and released from prison. Blaming Gloria as the reason for her father going to prison in the first place, Ashley and Jack tried to strip her of the Abbott name after finding out that she and their father were never legally married. In the end, although Gloria had been shut out of John's will, due to Jack's manipulation, a judge allowed her to keep the Abbott name.

Although Jack secretly regained control of Jabot through his other company the House of Kim, Ashley found herself torn between her brother and the family business that she onced loved. She left Genoa City to put some distance between her and her brother's shady business practices.

After short visits, which also included an appearance of Victor's wedding with (), Ashley met up with her siblings Jack, Traci () and Billy () in , where Jack reveals the plan to win back Jabot, the company that once was founded by their late father.

Ashley ended up in on business, where she soon met up with (), who was looking to launch a line of fragrances for . A short time later, she ended up in Los Angeles, where she accepted a position working for to design a fragrance to go with their new line of boutiques. She and Rick Forrester agreed to keep the romance they had in in the past, as he was moving on with a new love interest, the much younger Phoebe ().

Ashley began a relationship with () and they soon became engaged. However, Ridge's attentiveness to his true love Brooke in the aftermath of her rape created tensions in Ashley's relationship with Ridge. While Ashley was in on business, Ridge and Brooke reconnected, and Ridge broke off his engagement to Ashley upon her return to L.A. and planned his life with Brooke.

Brooke's brother Storm () took an interest in Ashley, but Ridge was worried about Ashley's safety because Storm had previously shot Stephanie (). Ridge told Ashley about the shooting, and it caused Ashley to drift away from Storm, who then tried to explain to her that he wasn't dangerous, even though Storm had brought a gun to her apartment. The gun incident turned into a tragedy when Storm's sister Katie () thought her brother intended to harm Ashley and rushed in to get the gun away from Storm. Katie was accidentally shot and was near death, in need of a heart transplant. Storm then shot himself in the head, leaving a note that he wanted his heart to save Katie's life. Ashley was shaken up about yet another failed romantic relationship.

When () told her that Forrester Creations would be putting their new fragrance line on hiatus, Ashley's role in the company began to diminish. Ashley's absence from L.A. was eventually revealed to be due to business trips in Europe.