Judas Cyriacus (Cyriacus of Ancona, Cyriacus of Jerusalem, Quiriacus, Quiricus, Kyriakos) (Spanish: Quirico, Italian: Ciriaco) (d. ca. AD 360) is the patron saint of Ancona, Italy. His feast day is celebrated in the Catholic Church on May 4.

He is said to have been the bishop of Ancona who died or was killed during a pilgrimage to the Holy Land. He is also (mis)identified with Bishop Judas Cyriacus of Jerusalem (Saint Cyriacus of Jerusalem), who was killed during a riot there in 133 AD. His feast is celebrated in the Eastern Orthodox Church on April 14. (The 2nd century Bishop Judah Kyriakos of Jerusalem is said to the last in the desposynic line for that post, his predecessors also being descendents from the Family of Jesus. This meant that '2nd century' Judah Kyriakos was the last Christian Bishop of Jerusalem who happened to still have Jewish origins.)

Judas Cyriacus and the True Cross

The martyrdom of Judas Cyriacus.

The local tradition of Ancona has identified this saint with the Jew named Judas Quiriacus or Kyriakos.

According to legend, the Jew Judas Kyriakos aided the Empress Helena in finding the deeply-buried True Cross. It is said that Judas suggested that three centuries of debris had accumulated over Golgotha and that the caves be removed. The oldest extant Syriac text of the legend of the discovery of the True Cross by Judas Kyriakos dates from ca. 500 AD. Its recent editor and translator says that the manuscript is "of great value for the history of the legend of the inventio crucis".

Sozomen (died c. 450 AD), in his Ecclesiastical History [1], states that it was said (by whom he does not say) that the location of the Holy Sepulchre was "disclosed by a Hebrew who dwelt in the East, and who derived his information from some documents which had come to him by paternal inheritance" (although Sozomen himself disputes this account) and that a dead person was also revived by the touch of the Cross. Later, popular versions of this story state that the Jew who assisted Helena was named Jude or Judas, but later converted to Christianity and took the name Kyriakos (kyriakos means "lordly" or "lord-like" in Greek).

Among the three accounts about the discovery of the True Cross of the Crucifixion that circulated throughout the Roman Empire in the 4th century, the two most widely repeated both credited Helena, the aged mother of Constantine the Great, who travelled to Jerusalem at some time after the Council of Nicaea (325) and her death (probably in 330) with the discovery. To recover it, it was necessary to demolish a temple, perhaps dedicated to Venus, that occupied the site. In one, the Jew Judas knew of the location of the Cross, and revealed it under torture. As J. W. Drijvers, the editor of the text, has noted,

The Judas Kyriakos legend originated in Greek, but became also known in Latin and Syriac and later on in many vernacular languages. This version relates how Helena discovered the Cross with the help of the Jew Judas, who later converted and received the name Kyriakos. It became the most popular version of the three.

The martyrdom of Judas Cyriacus

The body of Judas Cyriacus in the Cathedral of Ancona.

After assisting Helena with the finding of the True Cross, Judas Cyriacus was baptized, consecrated as bishop of Jerusalem, and martyred during the persecutions of Julian the Apostate, which would place his death in the 4th century. Another saint, named Saint Cyriacus, died during this century, and there may have been confusion between the two saints.

In the legendary Acts of his martyrdom, he engages in a dialogue with the emperor Julian, and is described as suffering horrible torments, along with his mother Anna.

The Empress Galla Placidia is said to have presented Ancona with the relics of Judas Cyriacus. However, the saint's head was situated at Provins, which was brought over from Jerusalem by Henry I of Champagne, who built a church in this town to contain it. This still stands as the Saint Quiriace Collegiate Church, although construction work during the 12th century was never completed due to financial difficulties during the reign of Philippe le Bel. A dome was added in the 17th century, and the old families of Provins who lived in the upper town were called "Children of the Dome." [2] 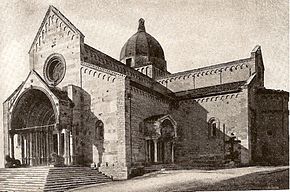 The Cathedral of San Ciriaco.

Monte Guasco, in Ancona, is the location of the Duomo, and is dedicated to Saint Judas Cyriacus. It is said to occupy the site of a temple of Venus, who is mentioned by Catullus and Juvenal as the tutelary deity of the place.

It was consecrated in 1128 and completed in 1189. Some writers suppose that the original church was in the form of a Latin cross and belonged to the 8th century. An early restoration was completed in 1234. It is a fine Romanesque building in grey stone, built in the form of a Greek cross, with a dodecagonal dome over the center slightly altered by Margaritone d'Arezzo in 1270.

The body purported to be Cyriacus' lies prostrate and visible in his tomb.