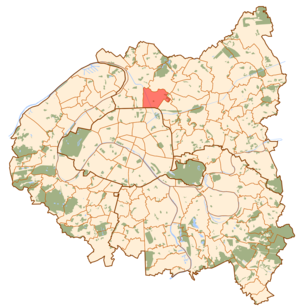 Aubervilliers is a commune in the northeastern suburbs of , . It is located 7.2 km. (4.5 miles) from the center of Paris. It is one of the most densely populated municipalities in .

The Telecity Paris datacenter which houses servers is located in Aubervilliers.

Aubervilliers, like most neighbouring towns has been hit very hard by deindustrialization. Big parts of the town are covered with abandoned warehouses and urban decay plagues the town. Some warehouses spaces called EMGP (former Entrepots et Magazins Generaux de Paris) has been converted to a gated office space, with tenants like Cinema Studios, Fashion and Telecommunications. However, most people who works there do not live in Aubervilliers so improvements for the town is mostly confined to business tax. The gated nature of this office space makes it harder for the town to profit from it.

In a more general way, very cheap prices per square meters for a town which is neighbored by Paris is starting to help. The governments also plans to install a university and Paris Metro will be extended to Aubervilliers by 2012. The municipality will also try to buy decayed buildings and refurbish them or demolish them.

Politics hope to start a gentrification process for this town like the one that happened in Montreuil. However, closeness to neighbourhoods with a very bad reputation will make it hard to come by. French specificities like social housing makes the gentrification process slower than in the USA. Moreover other specificities like "carte scolaire" which impose the school where you send your children based on the place you live will also be a problem to the town. Most parents don't want to send their children in a place where high schools can be violent.

Aubervilliers is divided into two cantons:

Aubervilliers is also served by La Courneuve – Aubervilliers station on Paris RER line B. This station, although administratively located on the territory of the neighboring commune of , lies in fact very near the town center of Aubervilliers.