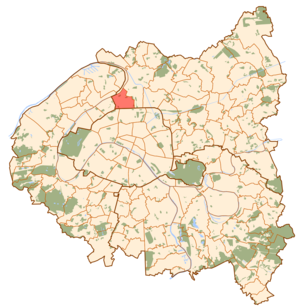 Saint-Ouen is a commune of the located in the northern suburbs of , . This "Francilienne" town is located 6.6 km (4.1 miles) from the center of Paris.

The communes neighbouring Saint-Ouen are to the south, to the west, and to the north, and to the east.

Saint-Ouen is home to Paris's , the most important concentration of dealers and second-hand dealers in the world. The flea market ("marché aux puces") is held every Saturday, Sunday, and Monday; because of this high frequency, compared to other flea markets, it has for a long time consisted only of professionals renting their spot for a minimum term of three years.

Saint-Ouen also includes the , a Roman Catholic cemetery associated with .

The includes only part of the commune. The other part belongs to the (South).

Saint-Ouen is served by two stations on : Garibaldi and Mairie de Saint-Ouen.