RAF Menwith Hill is a Royal Air Force station near Harrogate, North Yorkshire which provides communications and intelligence support services to the United Kingdom and the United States of America. The site contains an extensive satellite ground station and is a communications intercept and missile warning site[1] and has been described as the largest electronic monitoring station in the world.[2]

RAF Menwith Hill is commanded by a Royal Air Force Officer, supported by an RAF element, whilst the majority of support services are provided by the United States Air Force, 421st Air Base Group.

The site acts as a ground station for a number of satellites operated by the US National Reconnaissance Office,[3] on behalf of the US National Security Agency, with antennae contained in a large number of highly distinctive white radomes, and is alleged to be an element of the ECHELON system.[4] 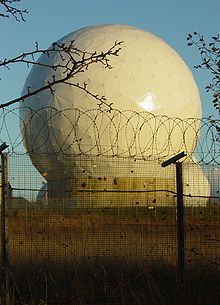 Menwith Hill Station was opened on 545 acres (2.21 km2) of land acquired by the British War Office in 1954 and leased to the United States. The U.S. Army Security Agency established a high frequency radio monitoring capability, monitoring communications emanating from the Soviet Union, operating from 1958.

In 1966 the National Security Agency took on responsibility for the U.S. operation of the site, expanding the capabilities to monitor international leased line communications transiting through Britain. The site was then one of the earliest to receive sophisticated early IBM computers, with which NSA automated the labour-intensive watch-list scrutiny of intercepted but unenciphered telex messages.

The European Parliament's Temporary Committee on the ECHELON Interception System stated: "It seems likely, in view of the evidence and the consistent pattern of statements from a very wide range of individuals and organisations, including American sources, that its name is in fact ECHELON, although this is a relatively minor detail."[5] During the early 1970s, the first of what became more than eight large satellite communications dishes were installed at Menwith Hill.[6]

Between 1984 and 1995 a number of peace camps were established in close proximity to the station. A number of other individual protests have also taken place, predominantly related to nuclear proliferation and strategic missile defense.[7] Protests also occurred at other US military locations in the UK such as Greenham Common.[8]

Objections to the Strategic Defense Initiative have led to demonstrators storming the perimeter fence.[9][10] and to demands in 2007 from Labour MPs for a full debate about missile defence and Menwith Hill.[11] Actions continue into 2006.[12]