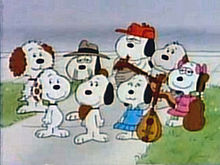 In the comic strip, Peanuts by Charles M. Schulz, Snoopy was often stated to have seven siblings. Five appeared at various times in the strip: four brothers, Andy, Marbles, Olaf, and Spike; and one sister, Belle. The two others were never mentioned by name in the comic strip. According to the TV special Snoopy's Reunion, their names are Molly and Rover; however, their appearance is not considered canonical in the comic strip.[1] In the June 6, 1959 comic strip, following the birth of Charlie Brown's sister Sally, Snoopy remarks that he has no brothers or sisters, and is an "only dog." This was later retconned to him being born in a litter of eight puppies. However, in a March 18, 1971 strip, Snoopy writes in his autobiography: "I was born one bright Spring morning at the Daisy Hill Puppy Farm. I was one of eight puppies." Their mother is called Missy, but has appeared only once in Peanuts, on July 26, 1996. A t-shirt that was sold for several years at Target and other stores shows Spike, Andy, Snoopy, Marbles and Olaf in a parody of the famous dogs playing poker print, despite much advertising copy which misidentified the characters. 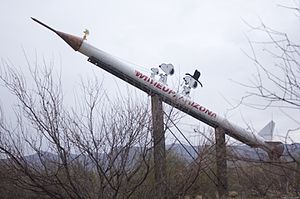 The town sign for Wikieup, Arizona shows Spike as the right-most character.

Spike appeared most frequently in the strip. His appearance is similar to that of Snoopy, but he is substantially thinner, has a perpetually sleepy look, and sports a long, droopy mustache and a fedora. He sometimes wears Mickey Mouse shoes which were a gift from Mickey Mouse. He is called Snoopy's older brother during the first story in which he appears. Spike lives alone in the desert near Needles, California, only occasionally interacting with the principal characters in the strip, generally in visiting Snoopy. His friends are mostly inanimate saguaro cacti; as the only saguaros in California are in the Whipple Mountains Wilderness, fifty miles south of Needles, Spike must live somewhere in this wilderness area. In the TV special Snoopy's Reunion, Spike's home was a huge hollow saguaro in which he kept books and his violin. Spike is named after Charles Schulz's childhood dog.

When he was introduced to the strip, it was revealed that Spike's exceptionally low weight was because he had been living with coyotes, and his job was to clean out their den, which apparently causes him to burn off a lot of body fat. Although he got a better-fed appearance after his first visit to the Brown household, he apparently had to go "back to business" soon after returning home, for he soon became as thin as before.

He temporarily became Rerun's dog in I Want a Dog for Christmas, Charlie Brown, and also had a TV special, It's the Girl in the Red Truck, Charlie Brown, in which he was the primary character. He was also a main character in Snoopy's Getting Married, Charlie Brown, where he is shown traveling from Needles to visit Snoopy to be the best beagle (best man) at his wedding. Spike competes in a dog race to earn money for a bus ticket. He wins the race, but then gets disqualified for not being a greyhound. At the end of the special, the final scene shows Spike returning home to Needles, where his private residence is a hollowed-out saguaro cactus with modern amenities inside, where he is rewarding himself for his long travels by eating cake from Snoopy's wedding.

During a story Spike is rescued by Snoopy and a group of Woodstock's friends, from a group of coyotes. The coyotes were apparently furious after Spike tried to sell them "Oceanfront Condos" in the desert of Needles. In August 1977, Spike was to be Snoopy's best man at his wedding, only to end up eloping with Snoopy's fiancee and then being dumped himself for a coyote. In 1988, Snoopy is convinced in a letter from Spike that the Summer Olympics were being moved from Los Angeles to Needles. Snoopy, of course, comes to realize that the claim was false, after Spike admitted that his "friend", a cactus, had told him the rumor. On February 15, 1987, Spike attempts to bury his fedora in a time capsule for a future civilization to study "Do not open until 6987!", but abandons this idea when he cannot survive the cold desert nights without the warmth his hat provides.

Another story arc from the 80s featured Spike as the hero; Charlie Brown's baseball team is at loggerheads when the owner of the vacant lot they play in was told to not allow them to use the field anymore due to possible liabilities. Spike pulls off a real estate coup in which the coyotes (still living in Needles) bought the vacant lot so the kids can once again play.

In the mid 80s Spike made a club with him and his cactus.

Spike was used in on-off appearances sporadically through the rest of Peanuts history but he was main between the years of 1984-1988. Another storyline was in 1994, when he and his brothers Olaf and Andy visit Snoopy in the hospital. They leave shortly after Snoopy gets well.

Beginning in a series of strips from May 1987, Spike began joining Snoopy in his World War I escapades as an infantryman fighting in the trenches, the one change in Spike's appearance being that he wears a WWI-style army Brodie helmet instead of his trademark fedora. In a 1996 series when Spike comes down ill with influenza, Snoopy and Spike's mother Missy came over on a troopship to visit, wearing a fur hat (the soldiers manning the rails of the troopship were also beagles). This was her sole appearance in the strip.

At least two strips mentioned his meeting with Mickey Mouse.

In Snoopy's Reunion, Spike is shown being taken away by a rich family (with a limo), but for reasons unknown, he ended up living in a cactus in the desert possibly like what happened with Snoopy and like Lila they also lived in an apartment building but had to take Spike to the desert instead of Daisy Hill.

In The Charlie Brown and Snoopy Show episode "The Lost Ballpark" Spike had a cameo appearance.

Spike's last appearance in the comic strips was on December 21, 1999, two months before the discontinuation of the strip.

Andy and Olaf live together on a farm. Andy is distinguished by his shaggy dog appearance, but otherwise looks like Snoopy. Olaf appears to be somewhat overweight. He does not bear much resemblance to Snoopy or his other siblings. He also wears a hunting cap. Olaf now has taken residence in the city of Orange and works as a maintenance manager in a department store. Olaf also says his favorite book is still "Joe Bunny", which he has owned since puppy hood.

Olaf is first seen during a series on January 19, 1989, in which he visits Snoopy. During this sequence, Lucy enters Olaf in an "ugly dog" contest, which he wins (much to his disappointment). He is pretty chubby compared to Snoopy's other siblings. He appears again in 1994 (beginning February 14), where he, Andy, and Spike visit Snoopy, who is in the hospital. After Snoopy gets better, the three brothers leave without saying good-bye. This is the first appearance of Andy in the strip.

After that, Olaf and Andy are shown four times in 1994. They are sitting against a barn, contemplating what direction their lives should go in. They appear sporadically after that.

Olaf usually plays the jug, and Andy has a full drum set, but is rather clumsy when carrying it and drops it from time to time.

Andy and Olaf spent some time traveling to Needles to live with Spike. However, after "two right turns and twenty-three wrong ones" they eventually ended up back at Snoopy's doghouse. After a brief stay and failure to become Rerun's dogs, they continued to wander around and were considering buying banjos in their last appearance on September 27, 1999. Notably, Andy is perhaps the only Peanuts character to have originated in animation before appearing in the strip (with the exception of Missy, Snoopy and his siblings' mother) -- his animated debut was the 1991 TV special Snoopy's Reunion. Andy is based on a wire-haired fox terrier (also named Andy) that Schulz owned from October 1988 to March 1994.

Belle is Snoopy's sister. She lives in Kansas City, Missouri with her unnamed teenage son who Snoopy noted as resembling the Pink Panther. Belle herself resembles her brother, but with longer eyelashes. In addition she wears a lace collar.

Belle only made a few appearances in the strip, but is well-remembered because of the Belle stuffed animal toys sold in the late 1970s and early 1980s. Many people who were not regular readers of the comic strip mistakenly thought that she was Snoopy's girlfriend, rather than his sister. In Snoopy's World War I fantasies, Belle is a nurse, not a soldier.

In 1984, Snoopy and Belle inspired fashion designers around the world, including Lagerfeld, Armani, and de la Renta to create one-of-a-kind outfits in their honor. Both beagles modeled for the "Snoopy in Fashion" exhibition held that year in Japan.

Marbles, reputedly the smartest of the siblings, is a spotted beagle whose few appearances in the comic strip were in 1982 from September 30 to October 9. Unlike Snoopy's siblings Spike and Belle, he does not share in Snoopy's fantasy WWI scenery, seeing Snoopy's Sopwith Camel as his doghouse, an "ambulance" as a shopping cart, etc. while commenting that "...he [Snoopy] was always the quiet one in the family." He was also seen to wear shoes.

He also appeared in the 1991 animated feature Snoopy's Reunion, and in a flashback from I Want a Dog for Christmas, Charlie Brown, when Charlie Brown was talking to Rerun about Snoopy's siblings. Marbles plays the banjo.

The two other siblings, Molly and Rover, appeared in the 1991 TV special Snoopy's Reunion; however, Schulz never depicted or named these characters in the comic strip, so these names are not considered to be canonical. In the TV show, these two siblings play the dobro and the mandolin. Molly is shown to be sort of pampered because she has her own makeup.

Snoopy's father [unnamed] and Snoopy's mother Missy have each appeared only once in the comic strip (father: June 18, 1989; Mother: July 26, 1996), but only Missy appeared on television. Missy appeared in Snoopy's Reunion in the flashback of when Snoopy and his siblings are born and being bought by people. Snoopy's father is said to have lived in Florida, and he wears glasses and has a mustache. Snoopy's mother looks like a female version of Snoopy (similar to Belle and Molly).