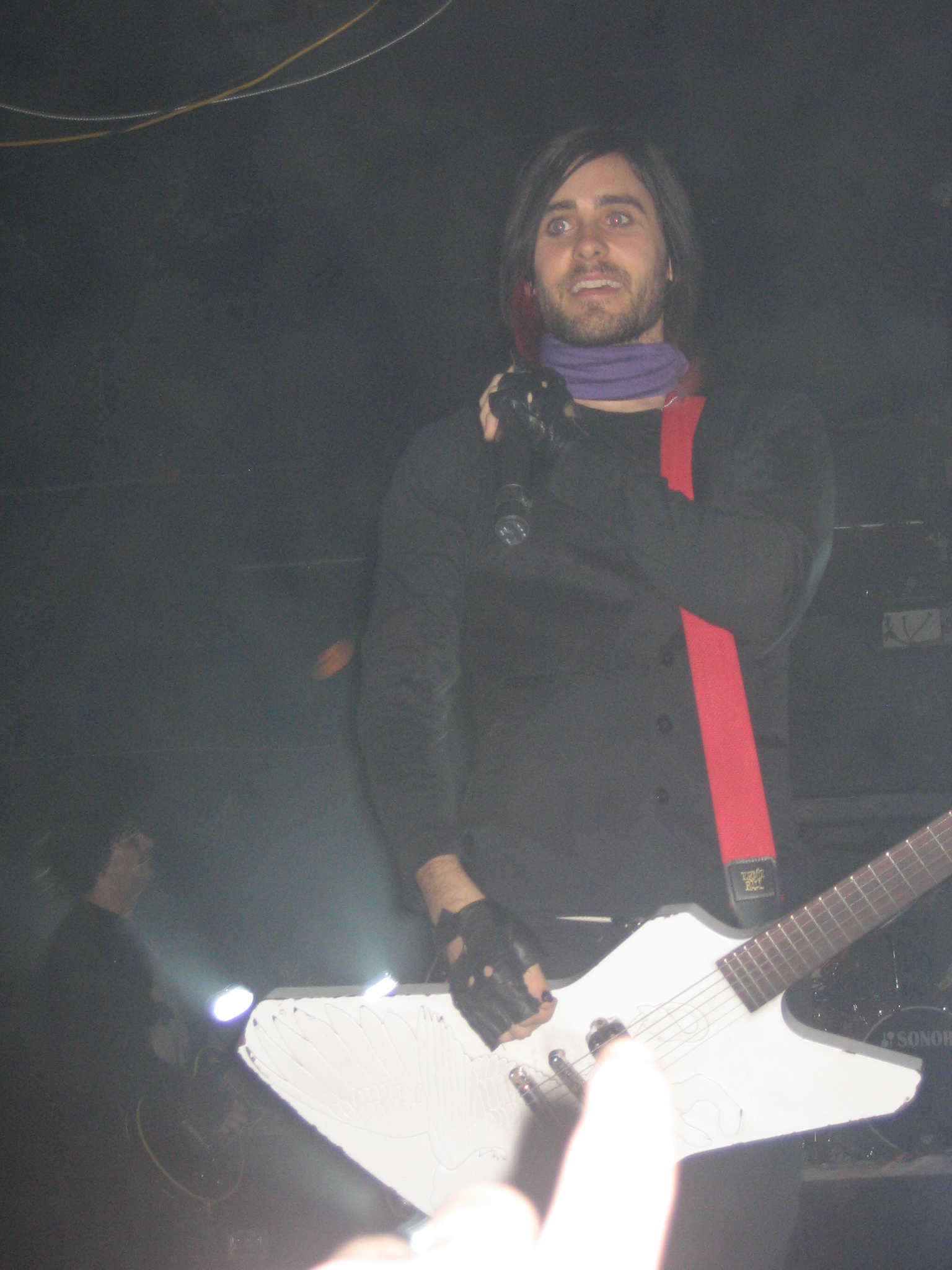 Jared Joseph Leto (born , ) is an American and . His first major acting performance was as Jordan Catalano in the television series "". This led to a growing film career, including a critically acclaimed portrayal of a drug addict in "". Additionally, Leto is the lead vocalist, rhythm guitarist and main songwriter of the rock band .

When he finished school, Leto enrolled at 's University of the Arts to pursue his interests in . However, he then transferred to 's after developing an interest in acting. [cite web | url = http://www.tv.com/jared-leto/person/53335/biography.html | title = Jared Leto Bio | accessdate = | date = | publisher = tv.com ] After dropping out briefly in the 10th grade, Jared decided to return and focus on his education at Flint Hill School in Oakton, VA. He graduated from Emerson Preparatory School in 1989 [http://www.nndb.com/people/438/000026360/]

In , Leto moved to to pursue an acting career. Two years later, he landed a role in the TV show "" in which he played Jordan Catalano, opposite . After the show ended in , Leto acted in several films such as "", "Girl, Interrupted", "Urban Legend", "The Thin Red Line", "Prefontaine" and "Fight Club", among others.

However, it was his portrayal of addict Harry Goldfarb in 's "" that garnered him more critical praise. After that, he returned with for "", then acted opposite in 's "Alexander", and later with in "".

Leto is a [ [http://www.goveg.com/feat/sexiestveg2007 Vegetarian of the Year 2007 Page] ] [ [http://www.peta2.com/OUTTHERE/o-sexyveg07.asp Peta 2 Vegetarian of the Year 2007 Voting] ] and especially mentions this in interviews where he talked about his increase of weight for the film "" (alongside ) in which he plays 's killer, .Fact|date=August 2007 He gained more than 60 pounds for this role.

He is set to star in the film "Mr. Nobody", playing the lead role, and is currently in talks to play a god in "Osiris Release". [ [http://www.ifmagazine.com/new.asp?article=4503 IFMagazine ] ]

Aside from his film career, Jared Leto is the lead vocalist, rhythm and sole of the band 30 Seconds to Mars along with his brother, Shannon Leto, on drums. They started the band in 1998 and have released two albums: their eponymous debut "30 Seconds to Mars" and 2005's "". They began opening for other bands and started their first ever headlining tour, Forever Night Never Day, in March of . In May 2007, they started touring Europe, as the opening act for . In August 2008, Virgin Records filed a $30 million lawsuit against Jared and 30 Seconds To Mars, claiming the band refused to deliver three albums as required by its contract. According to the lawsuit, the band "repudiated" a 1999 contract in July. [cite web| url = http://news.yahoo.com/s/ap/20080816/ap_en_mu/people_jared_leto| title = Virgin Records sues Jared Leto's band for $30M| accessdate = 2008-08-16] There is not an official release date for their third upcoming album, and it is unknown how the lawsuit will affect its release

For most shows, Leto uses either one of two custom-made Steve McSwain guitars, a white one called "" or a black one called "". The guitars— one a baritone and the other with a 25 1/2" neck — have the image of a gryphon which he drew for McSwain. Occasionally he plays a white Gibson SG 61' Reissue as seen in the video for "". Jared also plays Mesa/Boogie amps, more specifically the Triple Rectifier model and matches them with Mesa/Boogie speaker cabinets as well.

* Leto got the award for "Prince of Darkness" at the Fuse Fangoria Chainsaw Awards. (Aired October 28th, 2006)
* Leto received an award for Breakthrough Crossover Artist given at the 6th Annual Hollywood Life Awards held in December 2006.
* 30 seconds to mars won two awards at the K! Awards in 2008, being the best Best International Band, and the best single which was "From Yesterday"