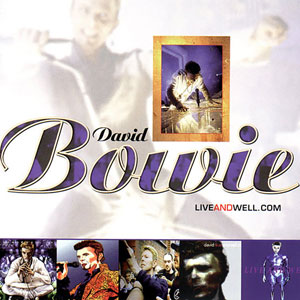 
"liveandwell.com" is a 1999 limited edition live album by . It is not available commercially and could only be acquired by being subscribed to at the time.The album is made up of recordings from the 1997 Earthling tour, featuring songs from the albums "Earthling" (1997) and "1. Outside" (1995).A second release of the CD in 2000 came with a bonus disk made up of four rare remixes, one being the song "Fun", which was itself not released commercially.

* "I'm Afraid of Americans", "Battle for Britain", "Seven Years in Tibet" and "Little Wonder" were recorded at the , , concert in October. "Battle for Britain" ends with playing a small part of the intro to the older Bowie song, "Time".
* "I'm Deranged", "Telling Lies" and "The Motel" were recorded at the Paradiso, Amsterdam, concert in June. "I'm Deranged" was a reworked version based on the Jungle Mix released on the bonus disk from "1.OUTSIDE" and some versions of the "Dead Man Walking" single.
* "The Hearts Filthy Lesson" was recorded at the , England, in July. The band went under the Tao Jones Index, with no spotlights on Bowie; instead, they performed in darkness with dry ice and strobe lights. Tao Jones Index, pronounced like Dow Jones Index, is a reference to Bowie's birth name (Jones) and his ongoing fascination with Eastern philosophy (evident on "Earthling" as well as in the video for "Seven Years in Tibet").
* "Hallo Spaceboy" and "Voyeur of Utter Destruction" were recorded at the Metropolitan, Rio de Janeiro, in November.