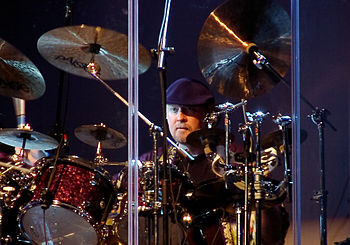 Doane Ethredge Perry (born June 16, 1954 in Mt. Kisco, Westchester County, New York) is an American musician, composer and author. He has been working since 1984 as drummer and percussionist with Grammy award winning band Jethro Tull.

From New York City, Perry began playing the piano at age seven and then took up drums at eleven. After hearing The Beatles, he decided to take up drums because of what he describes as "the possibility, however unlikely that might have been, of young girls chasing me down the street if I took up the drums."[1] By the time he was 14, he was working with his own band on weekends, and continued to do so until he graduated high school at the age of 17.

Member of the faculty of the Musician’s Institute in Hollywood, Ca. from 1988-1996. He continues to perform solo clinics at Drum Festivals and Music Colleges around the world. In 1992, released a critically acclaimed instructional video entitled “Creative Listening”, still widely used in the curriculum of music schools in the USA and abroad.

He has played on the following Jethro Tull albums and DVD's:

The Very Best of Jethro Tull

Living With The Past - CD & DVD

The Best of Acoustic Jethro Tull

Jack in The Green-Live in Germany - DVD

With Martin Barre - The Meeting

With Dave Pegg - Box of Peggs

Doane Perry has used a wide variety of equipment over the years. He will use different drum kits depending on several factors, such as whether he is performing live or recording in the studio. On recent Tull tours and records, he has been using Premier's Artist Series maple drums, but will occasionally use birch Genistas or maple Signia Series drums, Paiste cymbals, DW Pedals & Hardware, Pro Mark Drumsticks, Remo Drum Heads, Rhythm Tech Percussion, LP Percussion.

In 1990 he married actress Heather Woodruff. They currently reside in Woodland Hills, California.