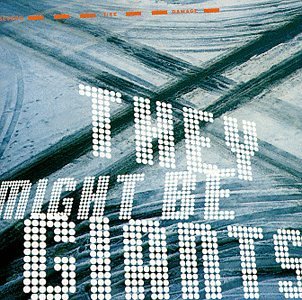 "Severe Tire Damage" is primarily a live album by , released in 1998 (see ). It also features a few studio tracks, including a new single ("Dr. Worm").

The live cuts, some recorded at soundchecks without any audience, feature at least one track from every album since their debut, which include a few old fan favorites that have been reworked since the duo adopted a full backing band. Songs like "She's an Angel", from their debut, "They Might Be Giants" and "", from their major label debut, "Flood", are treated to multiple guitars and a horn section. Conversely, the song "Meet James Ensor" originally appeared on their first full band effort, "John Henry" (1994) and surfaces here in a bare-bones rendition, with only vocals and an .

Besides the aforementioned lack of an audience on several tracks, some tracks have also undergone studio "retooling" - most notably, "Ana Ng," which appeared in its untampered form (with an uncropped intro and heavily distorted voice saying, "I don't want the world...") on the 1994 promo-only release "Live!! New York City." In truth, this 'live album' is not particularly representative of a live TMBG show, failing to show the on-stage improvisation, humor, and audience participation that are characteristic of a They Might Be Giants concert.

A condensed version of this album was released as "Live", which featured 10 of the 24 tracks listed here.

* Tracks 1, 2, and 17 were recorded in a studio rather than onstage; track 15 was recorded in a hotel room
* Tracks 18-24 were improvised in concert, apparently based on the "" movie series. They are "hidden" in that they are not listed in the track listing on the back of the album, and there is a long space after the end of "About Me", but the lyrics for 19 are printed in the liner notes and the songs do have their own individual tracks on the CD.
* "First Kiss" was later reworked and put on the 2001 album "" as "Another First Kiss", with the same basic melody and similar lyrics but a substantially different style and tempo.
* Similarly, "They Got Lost" was later recorded in the studio, and was released on "" as well as later being the title track on the rarities compilation album "".