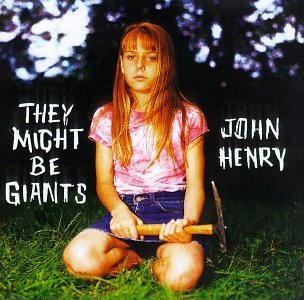 
"John Henry" is the name of ' fifth original album, although it is the sixth disc in their . It was released in 1994 (see ). It is the first album in which and utilized a full band, as opposed to playing most or all of the instruments themselves. The album's name, a reference to the man vs. machine fable of John Henry, is roughly an allusion to the band's fundamental switch to more conventional instrumentation, especially the newly-established use of a human drummer instead of a drum machine.

"John Henry" is both TMBG's longest record (twenty tracks clocking in at about a full hour) and their most divisive. The harder-rocking live sound and abundance of guitar solos was almost entirely unexpected by fans and panned by most mainstream critics.Fact|date=February 2007 However, it remains the band's highest-charting adult album, having peaked at #61 on the Billboard 200.

"I Should Be Allowed to Think" excerpts the first line ("I saw the best minds of my generation destroyed by madness, starving, hysterical") of the poem "" by .

"Meet " refers to an eccentric Belgian expressionist painter whose works excited John Flansburgh. In an interview, Flansburgh explained that "the line 'Dig him up and shake his hand' is actually very specific – a parallel idea to a lot of his paintings which involve resurrections, skeletons and puppets being animated. [...] With the song, I'm trying to encapsulate the issues of his life – an eccentric guy who became celebrated and was soon left behind as his ideas were taken into the culture and other people became expressionists." [ [http://www.westnet.com/consumable/1994/10.31/inttmbg.html/ westnet.com] ]

The song "Subliminal" contains a at the end of the song saying "Stare into the subliminal for as long as you can" twice.

"John Henry" is the first album credited to They Might Be Giants as a full band, rather than a duo:
*Brian Doherty – drums
*John Flansburgh – Vocals,
*John Linnell – vocals, keyboard, horns
* –
* – bass guitar