The term “Rifle-Musket” meant that the rifle was the same length as the musket it replaced, as a long rifle was thought necessary so that the muzzles of the second rank of soldiers would project beyond the faces of the men in front, ensuring that the weapon would be sufficiently long enough for a bayonet fight, should such an eventuality arise.

The 39" barrel had three grooves, with a 1:78 rifling twist, and was fastened to the stock with three metal bands, so that the rifle was often called a "three band" model.

With war breaking out between the Russians and the Turks, Britain realized that it was only a matter of time before they would be drawn into the conflict. The British Army was in the midst of a significant weapons transformation from smoothbore muskets to rifled muskets. While three of the four divisions of the field army in the Crimea had been supplied with the pattern 1851 Minie Rifle-musket, the other regiments of the army around the Empire still carried the 1842 pattern smoothbore musket. By the end of 1853, the Enfield Rifle-musket as approved by the War Department for the army and was put into production. The Enfield saw extensive action in the Crimean War which lasted from 1854–1856, with the first Enfield rifles being issued to troops from February 1855.[1] 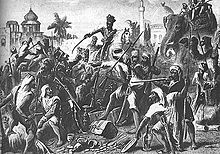 An engraving titled Sepoy Indian troops dividing the spoils after their mutiny against British rule, which include a number of muskets.

The Enfield Rifle-Musket was a contributing cause to the Indian rebellion of 1857. Sepoys in the British East India Company's armies in India were issued with the new rifle in 1857, and rumours began to spread that the cartridges (referring here to paper wrapped powder and projectile, not metallic cartridges) were greased with either pig fat or beef tallow - an abhorrent concept to Muslim and Hindu soldiers, respectively, for religious reasons. British military drills of the time required soldiers to bite open the cartridge, pour the gunpowder contained within down the barrel, then ram the cartridge, which included the bullet, down the barrel, remove the ram-rod, bring the rifle to the ready, set the sights, add a percussion cap, present rifle, and fire. The musketry books also recommended that “Whenever the grease around the bullet appears to be melted away, or otherwise removed from the cartridge, the sides of the bullet should be wetted in the mouth before putting it into the barrel; the saliva will serve the purpose of grease for the time being.[2]"

The idea of having anything which might be tainted with pig or beef fat in their mouths was totally unacceptable to the sepoys, and when they objected it was suggested that they were more than welcome to make up their own batches of cartridges, using a religiously acceptable greasing agent such as ghee, or vegetable oil. But this, of course, seemed to be "proof" that the issued cartridges were, in fact, greased with pig and/or beef fat. A further suggestion that the sepoys tear the cartridges open with their hands (instead of biting them open) was rejected as impractical - many of the sepoys had been undertaking musket drill daily for years, and the practice of biting the cartridge open was second nature to them. Incidentally, after the Mutiny, manuals changed the method of opening the cartridge to “Bring the cartridge to the forefinger and thumb of the left hand, and with the arm close to the body, carefully tear off the end without spilling the powder.”[3] The indifference of many British commanding officers only added more fuel to the already volatile situation, and helped spark the Mutiny in 1857.

The Enfield 1853 Rifle-Musket was issued to the British Army regiments, colonial Militia and Volunteer units and later to the New Zealand Armed Constabulary, and saw extensive use in the mid and latter stages of the New Zealand Land Wars between 1845 and 1872. The first Enfield rifles were issued to the 58th and 65th Regiments, stationed in the country, in 1858.[4]

Numbers of Enfield muskets were also acquired by the Maori later on in the proceedings, either from the British themselves (who traded them to friendly tribes) or from European traders who were less discriminating about which customers they supplied with firearms, powder, and shot. After the introduction of the Snider-Enfield, many of the Enfield Muskets in the Armed Constabulary's armouries were sold off to members of the public, and they remained a popular sporting and hunting arm in New Zealand well into the late 19th century, long after the introduction of metallic cartridge-loading firearms. 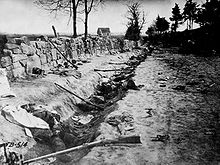 Confederates dead after the Second Battle of Fredericksburg on May 3, 1863. A number of Enfield 1853 Rifled Muskets can be seen where they have been dropped or fallen.

The Enfield 1853 Rifle-Musket was also used by both the North and the South in the American Civil War, and was the second most widely used infantry weapon in the war, surpassed only by the Springfield Model 1861 Rifled Musket. The Confederates imported more Enfields during the course of the war than any other small arm, buying from private contractors and gun runners when the British government refused to sell them arms after it became obvious that the Confederacy could not win the war. It has been estimated that over 900,000 P53 Enfields were imported to America and saw service in every major engagement from the Battle of Shiloh (April, 1862) and the Siege of Vicksburg (May 1863), to the final battles of 1865. At the Battle of Gettysburg on July 2, 1863, the 20th Maine Volunteer Infantry, led by Colonel Joshua L. Chamberlain, were armed with Enfield 1853 Rifle-Muskets during their famous bayonet charge against a relentless attack by Confederate Forces attempting to destroy the left flank of the Union Army on Little Round Top. Here is an excerpt from Chamberlain's Official Battle Report:

"The intervals of the struggle were seized to remove our wounded (and those of the enemy also), to gather ammunition from the cartridge-boxes of disabled friend or foe on the field, and even to secure better muskets than the Enfields, which we found did not stand service well." [1]

The ferocious charge of the 20th Maine, with bayonets fixed to their Enfield Rifle-Muskets, was victorious against the stunned Confederates, and Colonel Chamberlain received the Medal of Honor for his day on Little Round Top.

A modern reproduction of the Enfield 1853.