Hibari Misora (美空 ひばり, Misora Hibari?, May 29, 1937 – June 24, 1989) was an award-winning Japanese enka singer and actress.[1] and was the first woman in Japan to receive the People's Honour Award, which was awarded posthumously for her notable contributions to the music industry.[2] Misora recorded 1,200 songs, and sold 68 million records.[3] After she died, consumer demand for her recordings grew significantly, and by 2001 she had sold more than 80 million records.[4][5] Her swan-song "Kawa no Nagare no Yō ni" (川の流れのように?) is often performed by numerous artists and orchestras as a tribute to her, including notable renditions by The Three Tenors (Spanish/Italian), Teresa Teng (Taiwan), and Mariachi Vargas de Tecalitlan (Mexico).

Misora was born Kazue Katō (加藤 和枝, Katō Kazue?) in Isogo-ku, Yokohama, Japan. Her father was Masukichi Katō (加藤 増吉, Katō Masukichi?), a fishmonger, and her mother Kimie Katō (加藤 喜美枝, Katō Kimie?), a housewife. Misora displayed musical talent from an early age after singing for her father at a World War II send-off party in 1943. He invested a small fortune taken from the family's savings to begin a musical career for his daughter. In 1945 she debuted at a concert hall in Yokohama, at the age of eight. At the same time, she changed her last name, Katō, to Misora (美空?, lit. "beautiful sky"), at the suggestion of her mother. A year later, she appeared on a NHK broadcast, and impressed the Japanese composer Masao Koga with her singing ability. He considered her to be a prodigy with the courage, understanding, and emotional maturity of an adult. In the following two years, she became an accomplished singer and was touring notable concert halls to sold-out crowds.

Her recording career began in 1949 at the age of twelve, when she changed her stage name to Hibari Misora, which means "lark in the beautiful sky," and starred in the film Nodojiman-kyô jidai (のど自慢狂時代?). The film gained her nationwide recognition. She recorded her first single Kappa Boogie-Woogie (河童ブギウギ, Kappa bugiugi?) for Columbia Records later that year.[6] It became a commercial hit, selling more than 450,000 copies. She subsequently recorded "Kanashiki kuchibue", which was featured on a radio program and was a national hit.[6] As an actress, she starred in around 160 movies from 1949 until 1971, and won numerous awards. Her performance in Tokyo Kid (1950), in which she played a street orphan, made her symbolic of both the hardship and the national optimism of post-World War II Japan.[7]

On January 13, 1957, Misora was attacked with hydrochloric acid, and injured in Asakusa International Theater. The criminal was an overly enthusiastic fan of hers. Fortunately, the wound did not remain in her face.

In 1973 Tetsuya Katō, Misora's brother, was prosecuted for gang-related activity. Although NHK did not acknowledge any connection, Misora was excluded from Kouhaku uta gassen for the first time in 18 years.[6] Offended, she refused to appear on NHK for years afterwards.[6]

In April 1987, on the way to a performance in Fukuoka, Misora suddenly collapsed. Rushed to hospital, she was diagnosed with avascular necrosis brought on by chronic hepatitis. She was confined to a hospital in Fukuoka, and eventually showed signs of recovery in August. She commenced recording a new song in October, and in April of 1988 performed at a concert at the Tokyo Dome.

Her triumph was short-lived. Misora died on June 24, 1989 from pneumonia at the age of 52, at a hospital in Tokyo. Her death was widely mourned throughout Japan

Beginning in 1990, television and radio stations annually play her song "Kawa no Nagare no Yō ni" (川の流れのように?) on her birthdate to show respect. In a national poll by NHK in 1997, the song was voted the greatest Japanese song of all time by more than 10 million people.

In 1994, the Hibari Misora Museum opened in Arashiyama, Kyoto. This multistorey building traced the history of Misora's life and career in multi-media exhibits, and displayed various memorabilia. It attracted more than 5 million visitors, until its closedown on November 30, 2006, as to allow a scheduled reconstruction of the building. The main exhibits were moved into the Shōwa period section of the Edo-Tokyo Museum, until reconstruction was complete. The new Hibari Misora Theater opened on April 26, 2008, and includes a CD for sale of a previously unreleased song.[8] A bronze statue of her debut was built as a memorial in Yokohama in 2002, and attracts around 300,000 visitors each year.[9]

After Hibari's death in 1989, a TBS television drama special aired in thesame year by the name of "Hibora Misora story" (美空ひばり物語), where Misora was portrayed by Kayoko Kishimoto.

Hibari Misora's ancestry is a matter of dispute.[10] There are assertions that she was of ethnic Korean ancestry, and that she and her family held Korean passports.[6][11][12][13][14] Others dispute these claims and following study of her parents' ancestry, assert that Misora's background is not Korean, but Japanese.[15][16][17] 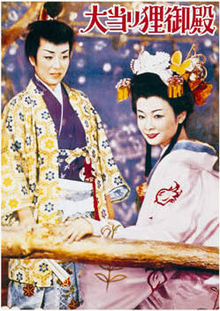