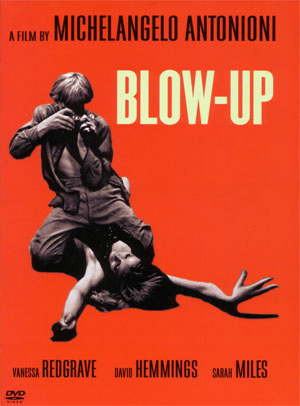 "Blowup" (as in screen credits, also rendered as "Blow-Up") is an award-winning 1966 British-Italian directed by and was that director's first film. It tells the story of a photographer's involvement with a murder case. The film was inspired by the short story "Las Babas del Diablo" ("The Droolings of the Devil") by n writer , and by the work, habits, and mannerisms of David Bailey. The film was scored by jazz pianist , although the music was not in the background, but played on a record by the main character.

"Blowup" stars , , , , and . The screenplay was written by Antonioni and , with the English dialogue being written by British playwright . The film was produced by , who had contracted Antonioni to make three English language films for (the others were "Zabriskie Point" and "The Passenger").

The story concerns a photographer (Hemmings) who may or may not have inadvertently preserved evidence of a murder, which may or may not involve a woman (Redgrave) who visits the photographer in his studio. As is typical with Antonioni films, the story does not follow a conventional narrative structure.

As a professional photographer, the main character mixes with the rich and famous in the London of the sixties. One day he chances upon two lovers in a park and takes photos of them. The woman of the couple pursues him, eventually finding his apartment and desperately trying to get the film. This leads the photographer to investigate the film, making blowups (enlargements) of the photos. This process seems to reveal a body, but the director uses the heavy film grain and black and white imagery to obscure the image. This drives the photographer to keep making blowups and try to find the truth.

He does eventually find the body in the park, but this time, unfortunately and surprisingly, he is without his camera. He tries to get a friend to act as witness, but later the body is gone.

Ultimately, the film is about reality and how we perceive it or think we perceive it. This aspect is stressed by the final scene, one of many famous scenes in the film, when the photographer watches a mimed tennis match and, after a moment of amused hesitation, enters the mimes' own version of reality by picking up the invisible ball and throwing it back to the two players. A tight shot shows his continued watching of the match, and, suddenly, we even hear the ball being played back and forth. Another version of reality has been created. Then, at the very end, Hemmings, standing all alone in the green grass of the park, suddenly disappears, removed by his director, Antonioni.

The film contains appearances from various famous people of the day, and some people who would become famous later.

In a scene near the end, perform "Stroll On". and play side by side until Beck smashes his guitar copying . of fame can be seen very briefly in the crowd in this scene,Fact|date=February 2007 and future media personality can be seen dancing in stripey trousers. As Hemmings enters the club where The Yardbirds are playing, a poster on the entry door with a drawing of a tombstone contains the following epitaph: Here lies Passed Away Royal Albert Hall 27 May 1966 R.I.P. — an obvious reference to Dylan's use of electric instruments during the performance.

Antonioni had considered using in the nightclub scene, but according to guitarist , "the expense of bringing the whole entourage to England proved too much for him." [ and , "Uptight: The Velvet Underground Story". p. 67. New York: Quill, 1983. ISBN 0-688-03906-5]

The book 'Yardbirds', by John Platt, Chris Dreja and Jim McCarthy, edited in 1983 by Sidgwick and Jackson Ltd. in London, provides another story. According to its writers Antonioni wanted the Who to perform in 'Blow-Up', as he was fascinated by 's guitar-smashing routine of those days. Although smashing up guitars certainly wasn't in the Yardbirds-act, for the occasion Jeff Beck demolished his. However, the guitar given to him for this purpose doesn't look very authentic.

The first scene (with the mimes acting) was filmed on the Plaza of Building (, , 1959-64, project by ). The park scenes were filmed at , Charlton, Woolwich, southeast , and the park is little changed since the making of the film. The street with the many maroon-coloured shop fronts is , and the shops belonged to dealer . The scene where Thomas sees the mysterious woman from his car, then proceeds to follow her, was shot in , London. He stops at [http://www.glendicrocco.com/phlac/wp-content/uploads/photos/blowup_heddon-st1966.jpgHeddon Street] , where the cover shot of 's LP was later photographed.Fact|date=February 2007 The photographer's studio was filmed at 49 Princes Place, London W11, later to become the studio of architects Richard Rogers, and currently the London office of architects John McAslan + Partners.Fact|date=April 2008

, a key event in the Code's eventual collapse.

's "" (1981), starring , which alludes to "Blowup", used sound recording rather than photography as its central motif. In the DVD commentary to his 1974 film "", which is also about sound recording, said he, too, was inspired by "Blow Up" in writing the screenplay. Fact|date=April 2008

In 's film "", a minor plot line involves a bumbling chauffeur who takes a picture showing the evil assassin (wearing a latex mask of Brooks's character's face) firing a gun at point-blank range at someone; he makes blow-ups until he can see the "real" Brooks's character, standing in the elevator in the background. (Technically speaking, the chauffeur does not make blow-ups; the joke is that he simply makes bigger and bigger enlargements until he has one the size of a wall.)

Indie filmmaker has said that the last scene of his 2007 film "" was trying to evoke the tennis ball scene at the end of "Blowup". Fact|date=April 2008

This film also inspired the Indian movie "", in which two photographers inadvertently capture the murder of a city mayor on their cameras and later discover this when the images are enlarged. The park in which the murder occurs is aptly named "Antonioni Park".

The comedy features a parody of the scene in which Hemmings' character photographs a model while barking commands and voicing enthusiasm.

The opening bassline on the track "Bring Down the Birds" from 's score served as the centerpiece for the song "Groove is in the Heart" by .

* Brunette, Peter. Audio commentary on the 2005 DVD (Iconic Films).
* Hemmings, David. "Blow-Up… and Other Exaggerations: The Autobiography of David Hemmings".