:"This article refers to the 1970 movie 'Zabriskie Point'. For the soundtrack album see ; for the natural monument, see ."Infobox_Film
name = Zabriskie Point 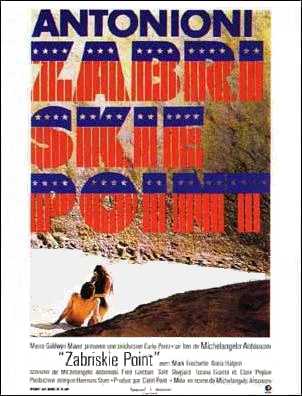 "Zabriskie Point" is a 1970 film by that depicts the U.S. counterculture movement of that time. It sympathetically tells the story of a young couple — an idealistic young secretary, and a militant radical — to put forward an anti-establishment message.

The stars and , neither of whom had any previous acting experience. The screenplay was written by Antonioni, fellow Italian filmmaker , American playwright , prolific screenwriter and , wife of . The film was the second of three English-language films that Antonioni had been contracted to direct for producer and to be distributed by . The other two films were "" (1966) and "The Passenger" (1975).

has an uncredited role as one of the student demonstrators inside the police station.

The , "Zabriskie Point", features music from various artists, including , , The Kaleidoscope, , , and the . A track ("You Got the Silver") did not appear on the soundtrack album. The songs by Pink Floyd, Jerry Garcia, and The Kaleidoscope were written for the film.

The tune from the widely known Pink Floyd song, "", was originally written on the piano by Richard Wright for the movie in 1969; this is where the "" title came from. Director rejected it on the grounds that it was too unlike their ""-esque work; as Roger Waters recalls it in impersonation, Antonioni's response was, "It's beautiful, but too sad, you know? It makes me think of church." [ [http://youtube.com/watch?v=jfGdHJ9jIR8 "The Making of The Dark Side of the Moon" Pt. 5 (Us and Them)] ] The song was shelved until "."

Antonioni visited the band while they were recording the album "", and considered including them in the soundtrack. The Doors recorded the song "L' America" for the film, but in the end it was never used.

The film was a notorious , attacked by critics and ignored by the counterculture audience that the was courting. The film cost $7 million to produce, and made less than $900,000 in its domestic release. In the booklet that was released with the CD soundtrack, it is unsympathetically declared that: "... critics of all ideologies — establishment, underground, and otherwise — greeted the movie with howls of derision. They savaged the flat, blank performances of Antonioni's handpicked first-time stars, Mark Frechette and Daria Halprin, and assailed the script's confused, unconvincing mix of hippie-buzzword dialogue, self-righteous, militant debate, and free-love romanticism."

More recently, however, film scholars like Robert Philip Kolker and Sam Rohdie have emphasized its importance in Antonioni's filmography.Fact|date=February 2007

* In the cityscape scenes of "", some of the fireballs were taken from footage from "Zabriskie Point".
* After making the film, stars and moved into Mel Lyman's Boston commune. Halprin married in 1972. In 1973, Frechette participated in a bank robbery in which one of his accomplices, Christopher Thien, was killed. He was sentenced to 15 years in prison. He died in prison under suspicious circumstances.
* The siege at the university was filmed at in .
* , in his book "How Bluegrass Music Destroyed My Life," writes about how unpleasant it was working for Antonioni.
* Scottish recording artist Momus wrote a song called "1000 Twentieth Century Chairs" for Japanese singer , in which the two sing of a woman who has left her architect boyfriend and confesses to having stolen his book of 1000 20th century chairs, only for the purpose of tearing the pages out and throwing them out of her 20th floor apartment window. The woman's "favorite chairs are the ones in "Zabriskie Point". The song is a , but both singers speak from the point of view of the same woman.