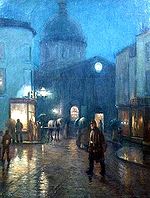 A Steady Drizzle by Norman Garstin

He was born in Caherconlish, Co. Limerick, Ireland, and was involved in various professions such as journalism and gold mining in South Africa. In 1885 he befriended members of the Newlyn School and settled there a year later, moving to nearby Penzance in 1890.

His work consisted primarily of small oil panels in the plein air style, something he had picked up from the French Impressionists such as Edouard Manet and Edgar Degas. He was also fascinated by Japanese calligraphy and admired the work of the American painter James McNeill Whistler.

Norman Garstin taught 40 students a year on European summer schools for 25 years and is credited with teaching Harold Harvey, the only Cornish Newlyn School painter.