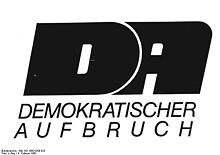 Democratic Awakening (German: Demokratischer Aufbruch) was an East German opposition political movement. It was founded in October 1989, based on existing politically active church groups. Founding members included Wolfgang Schnur, Friedrich Schorlemmer, Rainer Eppelmann, Günter Nooke and Thomas Welz. The organisation was officially transformed into a political party on December 16/17, 1989 in Leipzig. The party convention adopted a more conservative program than some of the founding members, like Schorlemmer, were willing to bear. They left the party. Others, like Nooke, who left some time later, resented the growing cooperation with Christian Democratic Union (CDU) of East Germany, which had formerly been a party in the socialist dominated democratic block of parties and mass organisations and had supported the totalitarian regime.

From February 1990 Angela Merkel served as the party's spokeswoman. Democratic Awakening now supported rapid German reunification and formed part of the Alliance for Germany (Allianz für Deutschland) with CDU and DSU for the 1990 Volkskammer elections on March 18. Only a few days prior to the elections, party chairman Schnur had to confess having been an informer for the Ministry for State Security and resigned. Although Alliance for Germany won the elections, Alliance member Democratic Awakening only collected 0.9% of votes, amounting to four seats in Volkskammer. Eppelmann became minister for disarmament and defense in the new government and new party chairman. On August 5, 1990 Democratic Awakening merged into the CDU, ceasing to exist.