The Christian Democratic Union of Germany (German: Christlich-Demokratische Union Deutschlands (CDU)) was an East German political party founded in 1945. It was part of the National Front with the Socialist Unity Party of Germany (SED) until 1989.

It contested the free elections in 1990 as an arm of the West German Christian Democratic Union, into which it merged after German reunification later that same year. 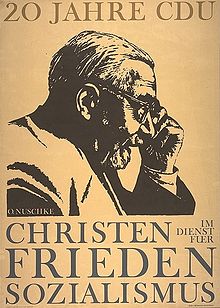 The CDU was primarily made up of devout middle class Christians. Originally similar to its West German counterpart, it transformed itself into a loyal partner of the Communists after its Sixth Party Congress in October 1952. At this gathering, it officially embraced socialism which affirmed the line of "Christian realism" and declared the CDU "a Socialist party without any limitations" (Otto Nuschke).

In the 22 "Theses on Christian Realism", the CDU committed itself to the "Socialist reorganisation of Society" (1. edition, 1951). Emphasising the "exemplary realisation" of Karl Marx's "teaching on building a new, better social order" in the USSR, it was declared that Socialism offered at the time "the best opportunity for the realisation of Christ's demands and for exercising the practical Christianity". The programme also asserted Christian Democrats' support for working class' leading role in establishing socialism, a development which the CDU regarded from its 6th Congress on as historically necessary and consistent".[1]

Its deputies, like all other parties, consistently voted for the government proposals in the Volkskammer, The only exception was the March 9, 1972 vote on the abortion law, when there were 14 'nays' and 8 absentees among the CDU deputies.

In the 1950s, the leader of the CDU was Otto Nuschke, a former member of the German Democratic Party during the Weimar Republic. He was a close ally of the Communists. After Nuschke's death, the party was led by August Bach for a shorter period and in 1966 Gerald Götting was elected as the Chairman. Before that he had been the party's General Secretary. Götting, himself a Volkskammer chairman in the 1970s, carried on and elaborated the pro-government line.

Götting remained Chairman and an SED ally until Erich Honecker was deposed in favour of Egon Krenz in October 1989. On 2 November 1989, Götting was deposed as CDU chairman by inner party reformers. In December 1989 Lothar de Maizière, a lawyer and deputy chairman of the Evangelical Church Synod of East Germany, was elected chairman. From that point on the party deposed (and later expelled) its top figures and would later support the GDR's annexation by West Germany.

In March 1990, the CDU won the first (and as it turned out, only) free general elections and became the biggest party in the People's Chamber. In April de Maizìere became Prime Minister of the GDR, heading a grand coalition that immediately set about reuniting the country with the West.