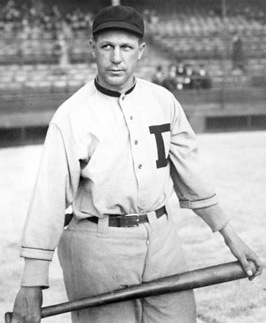 Young was a second baseman and . He began his Major League career in April 1913 as a for the , but only lasted seven games. In those seven games, Young struggled with an .067 in 15 s and also committed five errors.

Despite his inauspicious start, the gave him a second chance in 1915, and he became their starting second baseman for the next seven years (1915-1921). In 1915, his first season for Detroit, Young had a .243 batting average, but a much more respectable .339 on base percentage. This was a pattern that followed Young through much of his career. In nine seasons, Young had a batting average of .247 and an on base percentage of .339.

Young's offensive contributions were fueled by his ability to collect walks and avoid striking out. At 5'5", Young was one of the shortest players ever to wear the Tigers uniform. His small stature, and correspondingly small , undoubtedly assisted him in both collecting walks and avoiding s. In nine seasons, Young collected 495 bases on balls and struck out only 254 times (in 3,643 at bats). He was among the leaders in walks in 1918 (54), 1919 (85) and 1920 (69).

Aside from talent for collecting walks and avoiding strikeouts, Young's abilities as a are also borne out by the fact that he still holds the ' season record for singles by a switch hitter with 146 in 1920.

Whether due to the tutelage of or the arrival of the lively ball, Young's offensive numbers jumped dramatically in 1920. That year, he had a batting average of .291 (up from .211 the prior year) and an on base percentage of .406. He had a career-highs with 173 hits and 85 walks, with only 30 strikeouts in 594 at bats.

Young saw his offensive numbers climb further in 1921, as he hit for a career high .299 batting average and a .406 on base percentage. The 1921 season saw remarkable hitting throughout the Detroit lineup. The 1921 Tigers still hold the American League record for highest single season team batting average at .316. Of the starting position players, only Young and shortstop , who was traded to the Washington Senators in August, failed to break the .300 mark, and Young only missed by one point. Perhaps as proof of the saying that "good pitching beats good hitting," the 1921 Tigers finished in 6th place 27 the Yankees, depite averaging 5.7 runs per game.

In April 1922, the Tigers placed Young on s, and he was selected by Connie Mack. This gave Young the opportunity to play for his home town Philadelphia Athletics, and he played 120 games at second base for the A's that year. Young's arrival required A's second baseman, , to move to third base for the 1922 season.

Young was also involved in three triple plays as a second baseman, including one of the most unusual double plays in history. On May 18, 1921, in a game against the at home in Detroit, Young started a 4-4-6 double play (i.e., 2nd basemen makes 2 outs and 3rd basemen makes the final out) -- one of only three such plays in MLB history.

After leaving baseball, Young coached at and in his native Philadelphia after his professional playing career. [ [http://www.baseballlibrary.com/ballplayers/player.php?name=Ralph_Young_1889 The Ballplayers - Ralph Young | BaseballLibrary.com] ] In 1965, he died in Philadelphia at age 76.