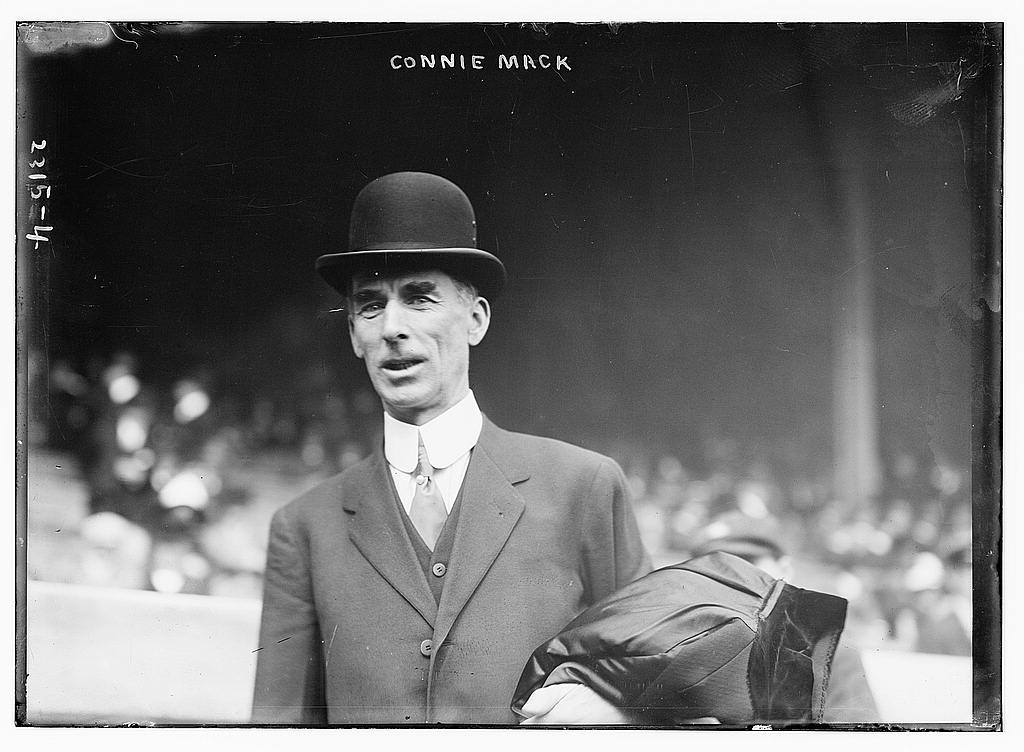 Cornelius Alexander Mack (, – , ), born Cornelius Alexander McGillicuddy, was an American professional player, manager, and team owner. Considered one of the greatest managers in history, he holds records for wins (3,731), losses (3,948), and games managed (7,755), with his victory total being almost 1,000 more than any other manager. He managed the Philadelphia Athletics for the club's first 50 seasons of play before retiring at age 87 following the 1950 season. He was the first manager to win the three times, and is the only manager to win consecutive Series on separate occasions (1910-11, 1929-30); his five Series titles remain the third most by any manager, and his nine pennants rank second in league history. However, constant financial struggles forced repeated rebuilding of the roster, and Mack's teams also finished in last place 17 times.

Born in to Irish immigrants; Mack was a journeyman who played 10 seasons in the beginning in 1886, and one in the for a total of 11 seasons in the Major Leagues. His last three seasons in the National league were as a player-manager with the from 1894 to 1896, with a 149-134 (.527) record. In by|1901, he became manager, general manager and part owner of the fledgling American League's Philadelphia Athletics. When New York Giants manager John McGraw called the Athletics "a nobody wanted," Mack adopted a white elephant as the team's logo, which the Athletics have used for all but a few years since. He also cut a distinctive figure himself with his personal rejection of wearing a team uniform in favour of a , tie and fedora.

Quote box
width=20%
align=left
quote=I shall never forget Connie Mack's gentleness and gentility.
source=, On the field, Mack was quiet, even-tempered and gentlemanly, serving as a father figure to his players as much as a coach, and was universally addressed as "Mr. Mack." He always called his players by their given names. , for instance, was "Albert" to Mack.

Veteran players welcomed the opportunity to play for Mack. The by|1927 Athletics, though nowhere near as famous as the team of the same year, was probably one of the best second-place teams in history, featuring several future Hall of Fame players including veterans , and as well as players such as , and in their prime and rookie . Once, when he visited the mound to remove the notoriously hot-tempered Grove from a game, Grove said, "Go take a shit," when Mack held out his hand for the ball. Mack looked Grove straight in the eye and calmly said, "You go take a shit, Robert." It was one of the few times he was ever known to use a profanity; usually the strongest thing he ever said was "My gracious!"

Mack was also tight-fisted. Seeing baseball as a business, he once confided that it was more profitable to have a team get off to a hot start, then ultimately finish fourth. "A team like that will draw well enough during the first part of the season to show a profit for the year, and you don't have to give the players raises when they don't win," he said. The most famous example of Mack's stinginess came on , by|1932, when the Athletics played a one-game series with the (the trip necessitated by Pennsylvania's s against Sunday baseball). To save train fare, Mack only brought two pitchers. The starting pitcher was knocked out of the game in the first inning, leaving only ing relief pitcher . Rommel pitched 17 innings as the Indians pounded out an American League record 33 hits for the game, but won the game, 18-17. It should be noted, though, that the Athletics had, in the three days previous, played three doubleheaders at home--and faced another home doubleheader the following day.

Mack also had his generous side for players in need. For instance, he kept Bender on the team payroll as a scout, minor league manager or coach from by|1926 until Mack himself retired as owner-manager in by|1950. Simmons was a coach for many years after his retirement as a player.

Mack managed the Athletics through the 1950 season (3,582-3,814, .484), when he retired at age 87. His 50-year tenure as Athletics manager is the most ever for a coach or manager in North American professional sports with just one team and will likely never be threatened. He remained owner and president (though his sons took an increasing role during this time) until the Athletics moved to after the 1954 season.

Mack twice dismantled his dynasties. He broke up his first great team out of outrage when some of his star players started signing lucrative contracts with upstart teams. They reportedly "laid down" during the , in which the heavily favored A's were swept by the Boston Braves, a team that had surged from last place on the to the pennant. Mack sold, traded or released most of the stars who didn't jump (Collins being one of the notable exceptions). The collapse was swift and total; the team crashed from 99 wins in 1914 to 43 wins in 1915 and last place. His 1916 team, with a 36-117 record, is often considered the worst team in American League history, and its .235 winning percentage is still the lowest ever for a modern (post-1900) big-league team. All told, the A's finished last seven years in a row from 1915 to 1921, and did not contend again until 1925.

He broke up his second great team due to financial difficulties due to the . He had every intention of building another winner. However, unlike most of his fellow owners, he had no other income outside the A's, so dwindling attendance left him without the extra money he needed to sign stars. He also never invested any money in a farm system. While the Athletics finished second in 1932 and third in 1933, they fell into the cellar in 1935 and finished either last or next-to-last all but once through 1946. Aside from 1948 and 1949, Mack's teams were never again a factor past June.

Mack was also known by the nickname "The Tall Tactician" and, in his later years, the "Grand Old Man of Baseball."

Mack's son played several games for the A's between 1910 and 1914, and also managed the team for parts of the 1937 and 1939 seasons when his father was too ill to do so. In more recent years, his descendants have taken to politics: Mack's grandson was a member of the from from 1983 to 1989 and the from 1989 to 2001, and great-grandson was elected to the House from Florida's 14th Congressional District.

Mack was elected to the Hall of Fame in 1937. On August 26, 2008, Connie Mack was the first person inducted into the Irish American Baseball Hall of Fame (18 W. 33rd St. in New York City). He is mentioned in the poem "Lineup for Yesterday" by :