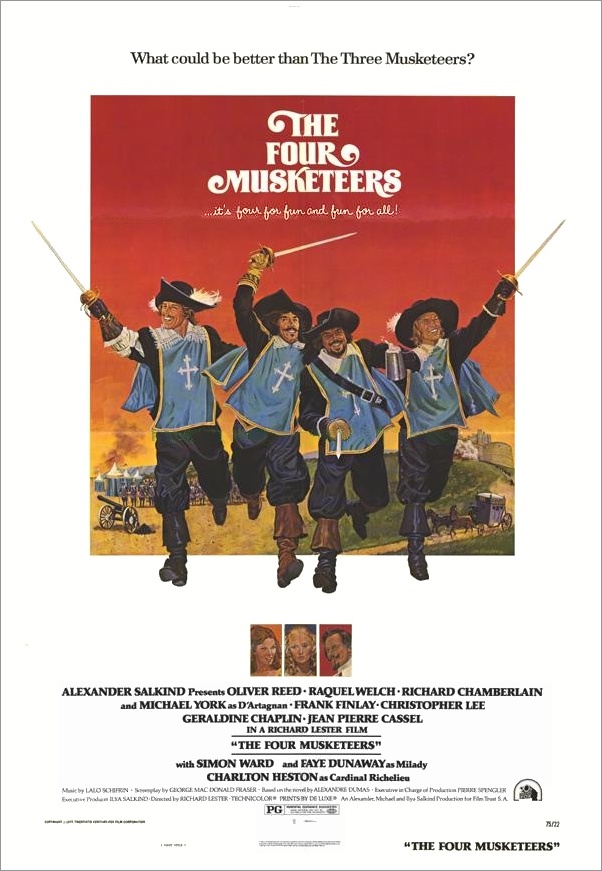 writer =
based on the novel by

"The Four Musketeers" is the title of a 1974 film, which follows upon his film of the previous year, "The Three Musketeers", and covers the second half of Dumas' novel "". Fifteen years later, the cast and crew returned to film "", loosely based on Dumas' "".

During post production on "The Three Musketeers", the producers realized that there was enough footage for two films and created "The Four Musketeers". Most of the actors were incensed that their work on the long shoot was used to make an entirely separate film. All SAG actors' contracts now have what is known as the "Salkind clause", which stipulates how many films are being made. Charlton Heston — who was handsomely paid for what was essentially a cameo role — was the only actor who did not feel cheated.

This is much the darker of the two films. There is less of the lighthearted horseplay seen in the first film. Constance is murdered by Milady, Rochefort is gravely wounded by d'Artagnan, and Milady is executed by a headsman as the Musketeers look on. We also see the backstory of the tangled relationship between Athos and Milady, and an extended prison sequence in which Milady uses her feminine wiles to turn the Duke of Buckingham's Puritan manservant into an assassin. In the end d'Artagnan triumphs over Richelieu's plotting and becomes an officer.