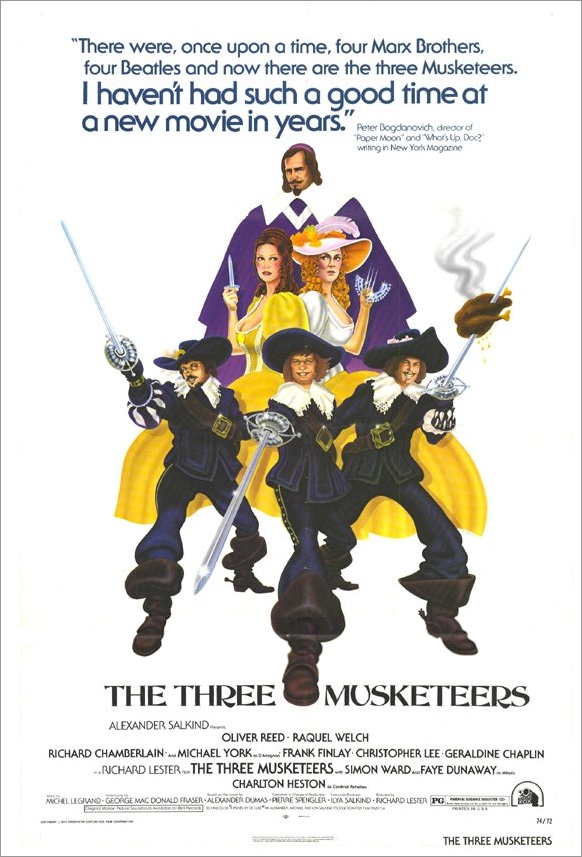 
writer =
based on the novel by
starring =

"The Three Musketeers" is a 1973 film based on the novel by . Directed by and written by (famous for his series of historical comic novels). It was orignally proposed in the 1960s, as a vehicle for , whom Lester had directed in two other films. The film was originally intended to run for three hours, but later the film was split in two (resulting in 1974's "The Four Musketeers)". The actors themselves were not informed that they were working on two films simultaneously, only Charlton Heston — handsomely paid for his handful of scenes — did not feel cheated by this duplicity. In 1989, the cast and crew returned to film "", loosely based on Dumas' "".

The film adheres strongly to the novel, but it also injects a fair amount of humour. The films were shot by David Watkins, with an eye for period detail. The fight scenes were choreographed by master swordsman William Hobbs and turn the swashbuckling movies of the Forties and Fifties on their collective ear; these are more like brawls, with the combatants using knees, fists, furniture and even wet laundry as often as they do their swords. The humor also can swing to the bawdy, with some double entendres and a bit of silliness that takes full advantage of Raquel Welch's (as Constance Bonacieux) charms, for instance.