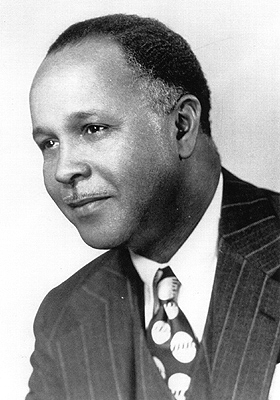 Percy Lavon Julian (April 11, 1899 &ndash; April 19, 1975) was an American research and a pioneer in the chemical synthesis of medicinal drugs from plants. He was the first to synthesize the natural product ; and was an American pioneer in the industrial large-scale chemical synthesis of the human hormones, , , and , from such as and sitosterol. His work would lay the foundation for the steroid drug industry's production of , other s, and birth control pills. He later started his own company to synthesize steroid intermediates from the Mexican . His work helped reduce the cost of steroid intermediates to large multinational pharmaceutical companies.

During his lifetime he received more than 130 chemical patents. Julian was the one of the first s to receive a doctorate in . He was the first inducted into the National Academy of Sciences, and the second African-American scientist inducted from any field.

Percy Julian was born in to Elizabeth Lena Adams(1878-?) and James Sumner Julian I (1871–?). James was a railway mail carrier for the , and his father was a slave.

Julian attended in . The college accepted few African-American students. The segregated nature of the town forced social humiliations. Julian was not allowed to live in the college dormitories and first stayed in an off-campus boarding home, which refused to serve him meals. It took him days before Julian found an establishment where he could eat. He worked firing the furnace and doing other odd jobs in a fraternity house. In return, he was allowed to sleep in the basement and eat at the house. Julian graduated from DePauw in 1920 and .

Julian wanted to obtain his doctorate in chemistry, but learned it would be difficult for an African American. After graduating from DePauw, Julian became a chemistry instructor at . He then received an Austin Fellowship in Chemistry and went to in 1923 for his Worried that white students would resent being taught by an , Harvard withdrew Julian's ship. He was unable to complete his at Harvard.

In 1929, while an instructor at Howard University, Julian received a fellowship to continue his graduate work at the , where he earned his in 1931. He studied under and was considered an impressive student. In Europe, he found freedom from the racial prejudices that had nearly stifled him in the States. He freely participated in intellectual social gatherings, went to the opera and found greater acceptance among his peers. [cite news |first= |last= |authorlink= |coauthors= |title=Percy L. Julian Is Awarded Doctorate in Chemistry. |url= |quote=Percy L. Julian, associate professor and acting head of the department of chemistry of Howard University, has been awarded his doctorate in chemistry at the , his achievement being a combination of two years' residence abroad and the transfer of graduate credit from . |publisher= |date=August 2, 1931 |accessdate=2007-02-14 ] [cite news |first= |last= |authorlink= |coauthors= |title=Julian Will Do Research in Chemistry in Austrian Universities. |quote=Nine members of the faculty of the college of liberal arts of Howard University have been granted leaves of absence for graduate study during 1929-1930, and one for two years beginning with the fall of 1929. Percy L. Julian will study organic chemistry and microanalysis at the and at . |work= |publisher= |date=June 9, 1929 |accessdate=2007-02-14 ] Julian was one of the first s to receive a in chemistry, after and Edward M. A. Chandler.

After returning from , Julian taught at for one year, where he met his future wife, Anna Roselle Johnson (Ph.D. in Sociology, 1937, University of Pennsylvania). They married on December 24, 1935 and had two children: Percy Lavon Julian, Jr. (1940-February 24, 2008), who became a prestigious civil rights lawyer in ; and Faith Roselle Julian (1944- ), who still resides in their Oak Park home and often makes moving speeches about her father and his contributions to science.

At Howard, Julian got involved in university politics and set off an embarrassing chain of events. After he goaded a white chemist named Jacob Shohan into resigning, Shohan retaliated by releasing to the local African-American newspaper the letters Julian had written to him from . The letters contained accounts of Julian's sex life, and criticism of individual Howard faculty members. Julian's laboratory assistant, Robert Thompson, also charged he had found his wife and Julian together in a sexual tryst. When Thompson was fired for filing a lawsuit against the University, he also gave the paper racy letters which Julian had written to him from Vienna. Through the summer of 1932, the "Baltimore Afro-American" published all of Julian's letters.

William Blanchard then offered Julian a position to teach organic chemistry at DePauw University in 1932. Julian helped Josef Pikl, a fellow student at the University of Vienna, to come to the United States to work with him at Depauw. In 1935 Julian and Pikl completed the of , and confirmed the structural formula assigned to it. Robert Robinson of Oxford University was the first to publish a synthesis of physostigmine, but Julian noticed that the melting point was wrong for Robinson's end product. When Julian completed his synthesis, the melting point matched the correct one for natural physostigmine from the .

Julian also extracted , which took its name from "Physostigma venenosum", the west African that he hoped could serve as raw material for synthesis of human steroidal hormones. At about this time, 1934, Butenandt , [ A. Butenandt,U. Westphal and H.Cobler, Berichte Deutsche chemische Gesellschaft,,67, 1611-1616, 2085-2087(1934)] and Fernholz [ E. Fernholz, Berichte Deutsche chemische Gesellschaft, 67 ,2027-2031 (1934)] ,in Germany, had shown that stigmasterol, isolated from soybean oil, could be converted to by synthetic organic chemistry.

Julian's research at Glidden changed in 1940 when he began work on synthesizing , and from the . Further, Julian isolated sitosterol from soybean oil by a technique he invented. At that time clinicians were discovering many uses for the newly discovered sex hormones. However, only minute quantities could be produced from the extraction of hundreds of pounds of spinal cords, testicles or ovaries.

In 1940 Julian was able to produce 100 lb of mixed soy sterols daily, which had a value of $10,000, in sex hormones. Julian was soon 100 pounds daily of mixed sterol dibromides. The result was the female hormone progesterone which was put on the American market in bulk for the first time. Production of other sex hormones soon followed. [Bernhard Witkop. "Percy Lavon Julian. 1899-1975." in Biographical Memoirs. National Academy of Sciences, 52(1980).223-266.]

His work made possible the production of these hormones on a larger (kilogram) industrial scale, with the potential of reducing the cost of treating hormonal deficiencies. Julian and his co-workers obtained patents for Glidden on key processes for the preparation of progesterone and testosterone from soybean plant sterols. Product patents held by a former cartel of European pharmaceutical companies prevented a significant reduction in wholesale and retail prices for clinical use of these hormones in the 1940s. [cite journal |author= |month=December 22, |year=1945 |title=Sex hormones in legal battle |journal=Bus Week |pages=pp. 46–50] [cite journal |author= |month=May |year=1951 |title=Mexican hormones |journal=Fortune |volume=43 |number=5 |pages=86–90, 161–2, 166, 168]

On April 13, 1949, at the announced the dramatic effectiveness of in treating . The cortisone was produced by Merck at great expense using a complex 36-step synthesis developed by chemist . It started with from cattle s. On September 30, 1949, Julian announced an improvement in the process of producing cortisone from bile acids. This eliminated the need to use (a rare and expensive chemical). By 1950, Glidden could begin producing closely related compounds which may have partial cortisone activity. Julian also announced the synthesis, starting with from soybean oil sterols of the steroid and possibly 17α-hydroxyprogesterone and pregnenetriolone, which he hoped might also be effective in treating rheumatoid arthritis [unfortunately they were not] . [cite journal |author=Gibbons, Roy |month=September 30, |year=1949 |title=Science gets synthetic key to rare drug; discovery is made in Chicago |journal= |pages=p. 1 |url=http://pqasb.pqarchiver.com/chicagotribune/access/494372192.html?dids=494372192:494372192&FMT=ABS&FMTS=ABS:AI&type=historic&date=Sep+30%2C+1949&author=ROY+GIBBONS&pub=Chicago+Daily+Tribune+(1872-1963)&edition=&startpage=1&desc=SCIENCE+GETS+SYNTHETIC+KEY+TO+RARE+DRUG]

On April 5, 1952, Durey Peterson and Herbert Murray at published the first report of a fermentation process for the microbial 11α-oxygenation of steroids in a single step (by common of the order ). Their fermentation process could produce 11α-hydroxyprogesterone or 11α-hydroxycortisone from progesterone or Compound S, respectively, which could then by further chemical steps be converted to cortisone or 11β-hydroxycortisone (). [cite journal |author=Peterson DH, Murray, HC |year=1952 |title=Microbiological oxygenation of steroids at carbon 11 |journal=J Am Chem Soc |volume=74 |issue=7 |pages=1871–2 |url=http://pubs.acs.org/cgi-bin/abstract.cgi/jacsat/1952/74/i07/f-pdf/f_ja01127a531.pdf |doi=10.1021/ja01127a531] After two years, Glidden abandoned production of cortisone from bile acids to concentrate on Compound S. Julian developed an excellent multistep process for conversion of , available in abundance from soybean oil sterols to . In 1952, Glidden, which had been producing progesterone and other steroids from soybean oil, shut down its own production and began importing them from Mexico through an arrangement with Diosynth (a small Mexican company founded in 1947 by after leaving Syntex). Glidden's cost of production of was relatively high, so Upjohn decided to use progesterone, available in large quantity at low cost from Syntex, to produce cortisone and hydrocortisone.

On December 2, 1953, and Syntex acquired exclusive licenses of Glidden patents for the synthesis of Compound S. Pfizer had developed a fermentation process for microbial 11β-oxygenation of steroids in a single step that could convert Compound S directly to 11β-hydrocortisone (cortisol), with Syntex undertaking large-scale production of at very low cost.

Around 1950 Julian moved his family from Chicago to the suburb of , where the Julians were the first family. [cite web |url= http://www.dusablemuseum.org |title= From Dreams to Determination: The Legacy of Doctors Percy and Anna Julian|accessdate=2007-02-13 |publisher= Dusable Museum] Although some residents welcomed them into the community, there was also opposition by some. Their home was fire-bombed on Thanksgiving Day, 1950, before they moved in. After the Julians had moved to Oak Park, the house was attacked with dynamite on June 12, 1951. The attacks galvanized the community and a community group was formed to support the Julians. [cite news |first= |last= |authorlink= |coauthors= |title=Arson Fails at Home of Negro Scientist. |url= |quote=Chicago, November 22, 1950. An attempt was made tonight to burn down the expensive home that Dr. Percy Julian, 51 years old, internationally known Negro research chemist, recently purchased in one of the most exclusive sections in suburban Oak Park. |publisher= |date=November 23, 1950 |accessdate=2007-02-14 ] Julian's son later recounted that during these times, he and his father often kept watch over the family's property by sitting in a tree with a shotgun.

In 1953, Julian founded his own research firm, Julian Laboratories, Inc. He brought many of his best chemists, including African Americans and women, from Glidden to his own company. Julian won a contract to provide Upjohn with $2 million worth of . To compete against , he would have to use the same as his starting material. Julian borrowed and used his own money to build a processing plant in Mexico, but he could not get a permit from the government to harvest the yams. Abraham Zlotnik found a new source of the yam in Guatemala for the company.

In July 1956, Julian and executives of two other American companies trying to enter the Mexican steroid intermediates market appeared before a U.S. Senate subcommittee. They testified that Syntex was using undue influence to monopolize access to the Mexican yam.

One year Julian Laboratories chemists found a way to quadruple the yield on a product on which they were barely breaking even. Julian reduced their price for the product from $4,000 per kg down to $400 per kg.

In 1964, Julian founded Julian Associates and Julian Research Institute, which he managed for the rest of his life. [cite web |url= http://www.depauw.edu/library/archives/percyjulian/biography.asp|title= DePauw Archives biography|accessdate=2007-02-13 |publisher= ]

He was elected to the National Academy of Sciences in 1973 in recognition of his scientific achievements. He was the second to be inducted after .

Julian died of liver cancer on April 19, 1975 in St. Theresa's Hospital in and was buried in Elm Lawn Cemetery in .

*In 1950, the named Percy Julian the Chicagoan of the Year.

The Percy Lavon Julian family papers are archived at .