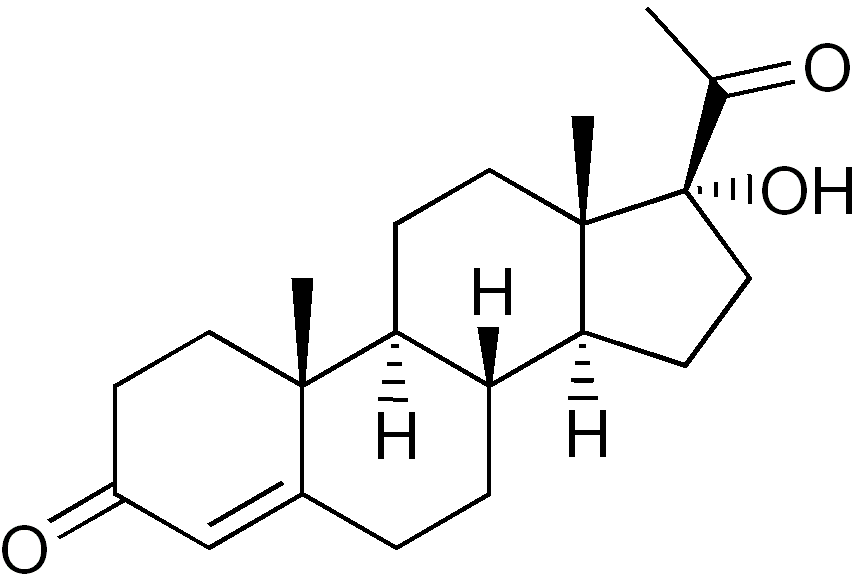 17-Hydroxyprogesterone (17-OH progesterone or 17OHP) is a C-21 produced during the synthesis of s and s.

As a hormone, 17OHP also interacts with the .

It is derived from via , a P450c17 enzyme, or from via 3β-hydroxysteroid dehydrogenase/Δ5-4 isomerase.

17-Hydroxyprogesterone is a natural progestin, and in pregnancy increases in the third trimester primarily due to fetal adrenal production.

This hormone is primarily produced in the s and to some degree in the s, specifically the of the . Normal levels are 3-90 ng/dl in children, and in women, 15-70 ng/dl prior to ovulation, and 35-290 ng/dl during the .

Measurements of levels of 17-hydroxyprogesterone are useful in the evaluation of patients with suspected as the typical enzymes that are defective, namely 21-hydroxylase and 11β-hydroxylase, lead to a build-up of 17OHP. In contrast, the rare patient with 17α-hydroxylase deficiency will have very low or undetectable levels of 17OHP. 17OHP levels can also be used to measure contribution of progestational activity of the corpus luteum during pregnancy as progesterone but not 17OHP is also contributed by the .

The application of 17OHP has been shown to be useful to delay in pregnancy.