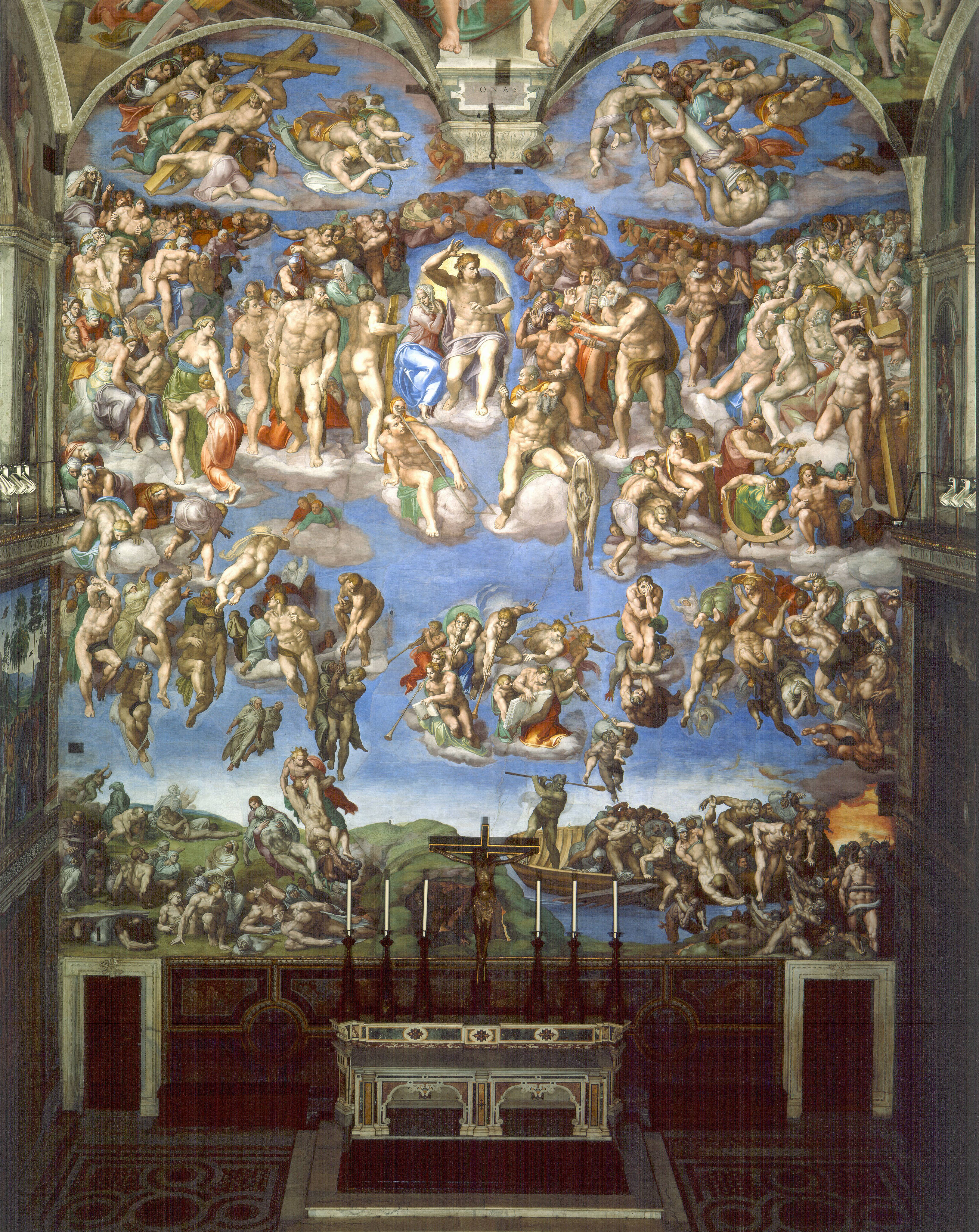 The "Last Judgment" is a by on the wall of the in . It took eight years to complete. began working on it three decades after finishing the ceiling of the chapel.

The work is massive and spans the entire wall behind the altar of the Sistine Chapel. It was executed from 1534 to 1541. The Last Judgment is a depiction of the and the apocalypse. The souls of humans rise and descend to their fates, as judged by Christ and his Saintly entourage. In striking contrast to previous depictions of this scene, the Saints are not interceding with Christ for mercy on the sinners. Theologically, there is a Lutheran flavor to the painting.

"The Last Judgment" was an object of a heavy dispute between and Michelangelo: the artist was accused of immorality and intolerable obscenity, having depicted naked figures, with genitals in evidence, inside the most important church of , so a campaign (known as the "Fig-Leaf Campaign") was organized by Carafa and ('s ambassador) to remove the frescoes. When the Pope's own Master of Ceremonies, Biagio da Cesena, said "it was mostly disgraceful that in so sacred a place there should have been depicted all those nude figures, exposing themselves so shamefully," and that it was no work for a papal chapel but rather "for the public baths and taverns," Michelangelo worked da Cesena's semblance into the scene as , judge of the underworld (far bottom-right corner of the painting). It is said that when Cesena complained to the Pope, the pontiff responded that his jurisdiction did not extend to hell, so the portrait would have to remain.

The genitalia in the fresco were later covered by the artist , whom history remembers by the derogatory nickname "Il Braghettone" ("the breeches-painter").In the painting, Michelangelo does a self portrait depicting himself as St. Bartholomew after he had been flayed (skinned alive) This is reflective of the feelings of contempt Michelangelo had for being commissioned to paint "The Last Judgement".

Apart from its technical mastery, the painting is noted for its radical departures from traditional depictions of the . In particular, firstly, the overall structure seems to swirl around Christ at the centre, replacing the traditional pattern of horizontal layers depicting heaven, earth and hell; and secondly, the figure of Christ himself, beardless and muscular, surrounded by light, which has often been compared to the classical sun-god . One week before commissioning the work, is known to have been studying the new of . There seems a real possibility that the painting is in part as an allegory of the new cosmology, with Christ as the sun in the centre of the universe. [citation | first= V. |last=Shrimplin | title = Michelangelo and Copernicus: A Note on the Sistine "Last Judgement "| journal = Journal for the History of Astronomy | page=p. 156 | volume = 31 | year = 2000| url = http://adsabs.harvard.edu/abs/2000JHA....31..156S. See also citation | first= V. |last=Shrimplin | title = Sun Symbolism and Cosmology in Michelangelo's Last Judgement | publisher = Truman State University Press | place = Kirksville| year = 1999.]