The Greater False Vampire Bat (Megaderma lyra) is a carnivorous bat, just as the South American Spectral Bat. However, it lives in Asia, along with other bats of the genus Megaderma, which are also known as "false vampires".

It has a relatively large body size 65–95 mm and its weight ranges between 40-60 g. Average forearm length 66.4 mm (56.0-71.5mm). Like the Spectral Bat, it has no tail. Fur colour is bluish grey except on the underside which is brownish grey. It is smaller than the Spectral Bat. Its ears are big. The noseleaf is erect and 10mm in length.

The species is found in South Asia and Southeast Asia including Pakistan, India, Sri Lanka, Myanmar, South China, Malaysia, and the Philippines. Its typical habitat is humid forest. It is one of the very few carnivorous bats and is known to eat small bats, small birds, lizards and frogs, fish, mice and rats, as well as large insects. It hunts at and after dusk. It roosts in caves, abandoned mines and attics of houses. Other species of bats avoid caves where this species roosts, probably because of fear of being eaten by them.

Wings are modified pectoral appendages that have been adapted for flight. Bat wings are membranous wings that attach to the side of the body and include the small hind legs and sometimes the tail as well. The last four digits have been elongated to support the wing skin connects each of the digits covering the entire wing structure. The first digit has been modified into a grasping hook that allows the bat limited ability to grasp onto objects. This hook remains free of the wing. All bat wings are shaped differently based upon the different selective pressures for each habitat and lifestyle. There are seven key measurements used to classify bat wings:

Wing Span The distance between the wing tips of a bat with wings extended so that the leading edge of the wing is straight. With units of B/m Wing Area Is the combined area of the two wings, the entire tail membrane and the portion of the body between the wings. With units of S/m2 Aspect Ratio Is the square wingspan divided by the wing area; a higher aspect ratio usually corresponds with greater aerodynamic efficiency and lower energy losses in flight. Aspect ration correlates well with the outline of wing shape, because wings with rounded tips naturally have low aspect ratio. However not all shape variation in bat wings is expressed by the aspect ratio alone. Wing Loading Is the weight of the bat divided by the wing area, and it is related to the mean pressure on the wings. Therefore, flight speed is proportional to the square root of wing loading. Tip Length Ratio Is the ratio of the length of the hand wing to the length of the arm wing. Tip Area Ratio Is the ratio of the hand wing area to the arm wing area. Tip Shape Index This measurement is particularly valuable because it is independent of the overall size and shape of the arm and hand wings, it is determined simply by their relative size. A value of 1 corresponds to triangular wingtips. Higher index values indicate rounded or nearly square wing tips and with values below 1 the wingtip becomes more acute and the wing thins considerably as the tip is approached

Environmental pressure put on the bat by the habitat causes selective adaptation of the wings. This permits a species to improve its capacity to use certain food sources in certain ways. Mass-carrying ability, for example, is most closely linked with wing loading. As wing loading increases, the bat must fly faster and therefore expend more energy. Because they habitually fly with substantial loads, we expect carnivores to have relatively low wing loading. Large wing area and large wingtips ensure sufficient thrust and weight support when loaded, without risk of stall. Large wing area also permits a slow controlled approach to prey and facilitates easy take-off under load. Flight in cluttered areas requires slow speeds and high maneuverability; this constrains a bat to a short wing, because long wings can be a physical hindrance. The optimal wing size and shape for any bat is a compromise between numerous of different, and sometimes conflicting, selection forces.

Megaderma lyra bats are carnivorous. They hunt, using a method called gleaning, in a variety of different habitats. The wing measurements for a typical adult are: Total mass 0.0375 M/kg, Wing Span 0.440 B/m, Wing Area 0.0312 S/m2, Aspect Ratio 6.2, Wing Loading 11.8 Mg/S/N*m-2, Tip Length ratio 1.70, Tip area ratio 0.96 and Tip shape index 1.30. These measurements show that Megaderma lyra have a low wing loading and aspect ratio. Meaning that Megaderma lyra aren’t very fast fliers but they have good maneuverability. They have wings designed to give them power and control which they need for capturing and lifting prey. A low wing loading also provides the capacity for increased life which is essential if prey is equal to 50% your body mass. 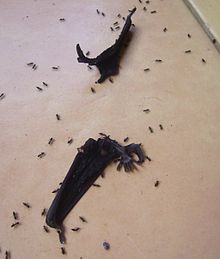 The wings, and only remains, of a small bat devoured by a false vampire bat, which dropped them from the ceiling onto the floor of a veranda in Sri Lanka.

Megaderma lyra are Gleaning bats. Gleaning bats prefer to capture prey from ground and water surfaces. They consume large arthropods and small vertebrates such as frogs, geckoes, lizards, fish, mice, birds, and even smaller bat species. All of the bats in the roost will hunt from dusk to dawn with the exception of the pups. Some bats will commute 4 km to their hunting area. Once they reach this spot they will remain in an area of approximately 0.1 km2. All foraging areas take advantage of at least two different types of habitats offering them a more diverse selection of prey.

Megaderma lyra use a combination of hunting strategies. 85% of prey is captured during searching flights in which the bats fly 0.5 meters above the ground. These flights last for about 6 minutes. It has been observed that some will sustain flight for 45 minute and based on this observation it has been speculated that Megaderma lyra can eat while in flight. Megaderma lyra also utilize a “sit and wait” strategy. They will perch 2 meters above ground and wait.

Bats have the same basic auditory system as all mammals only theirs have evolved to be highly sensitive so that sound can be utilized as a method of seeing. Bats utilize ultrasonic sound (greater than 20 Hz), which most mammals cannot hear during echolocation.

A large ossified larynx allows the bat to build up a lot of tension on the vocal cords. The bat can then emit sound waves, through either its nose or mouth, which can reach up to 150 Hz. These high frequency sound waves are far closer together then low frequency sound waves. This gives the bat more information about its surroundings when the information is processed by the brain. These waves can be emitted 100 times per second as the bat stalks its prey.

Interestingly enough in the Microchiroptera family, successful foraging, particularly in clutter, is sometimes hindered by echolocation. Some species use calls which are clutter-resistant, whereas some do not others forsake echolocation while hunting. In some cases foraging success may be more limited by echolocation than by flight performance. In any case it has been observed that in captivity, Greater False Vampire Bats can successfully detect and catch mice and frogs in complete darkness without echolocating.

Not much is known about Megaderma lyra reproduction. We do know that mating takes place from November through to January. After which females segregate from males. Gestation usually lasts 150–160 days. April to June is when child birth happens where one or sometimes two pups are born per mother. The birth disruption between males and female is equal. Males reach sexual maturity by 15 months, females by 19 months.

Females will carry young with them during foraging until the pups are between one and twenty-three days old, at which point they “park” them at either a day or a special night roost. Young are nursed for 2 to 3 months.