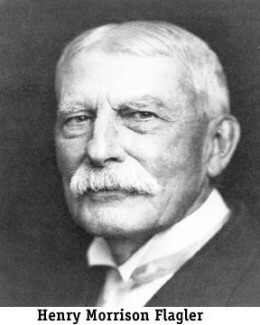 Henry Morrison Flagler ( &ndash; ) was an American tycoon, promoter, railroad developer and partner in . He was a key figure in the development of the eastern coast of along the and was founder of what became the . He is known as the father of .

Henry Flagler was born in Hopewell, and was the son of a poor minister. He received an eighth grade education before leaving home at 14 to work in his cousin's store, L.G. Harkness and Company, in Bellevue, at a salary of US$5 per month plus . By 1849, Flagler was promoted to sales staff of the company at a salary of $400 per month. He eventually left Bellevue and founded the Flagler and York Salt Company, a mining and production business in Saginaw, in 1862 with his brother-in-law Barney York. By 1865, the end of the caused a drop in the demand for salt and the Flagler and York Salt Company collapsed. Heavily in debt, Flagler returned to Bellevue. He had lost his initial $50,000 investment and an additional $50,000 he borrowed from his father-in-law and Dan Harkness. Flagler felt he had learned a valuable lesson: only invest in a business after thorough investigation. [ Martin, Sydney. "Florida's Flagler"(USA: University of Georgia Press, 1949) p. 29.]

After the failure of his salt business in Saginaw, Flagler returned to Bellevue and reentered the grain business as a commission merchant with The Harkness Grain Company. Through this business, Flagler became acquainted with , who worked as a commission agent with Hewitt and Tuttle for the Harkness Grain Company. By the mid-1860s, Cleveland had become the center of the oil refining industry in America and Rockefeller left the grain business to start his own oil refinery. Rockefeller worked in association with chemist and inventor . In 1867, Rockefeller, needing capital for his new venture, approached Flagler. Flagler obtained $100,000 from a Harkness on the condition that Flagler be made a partner. The partnership was formed with Flagler in control of Harkness' interest. [ Martin. p. 45.] The partnership eventually grew into the Corporation. It was Flagler's idea to use the rebate system to attract customers. Though the refunds issued amounted to no more than fifteen cents, they put in position to outcompete other oil refineries. [ Martin. p. 64.] By 1872, it led the American oil refining industry, producing convert|10000|oilbbl/d|m3/d. In 1877, moved its headquarters to , and Flagler and his family moved there as well.

In 1878, on the advice of his physician, Flagler traveled to Jacksonville for the winter with his first wife, Mary (née Harkness) Flagler, who was quite ill. Two years after she died in 1881, he married again. Ida Alice (née Shourds) Flagler had been a for Mary Flagler. After their wedding, the couple traveled to Saint Augustine. Flagler found the city charming, but the hotel facilities and transportation systems inadequate. He recognized Florida's potential to attract out-of-state visitors.

Though Flagler remained on the Board of Directors of Standard Oil, he gave up his day-to-day involvement in the corporation in order to pursue his interests in Florida. He returned to St. Augustine in 1885 and began construction on the 540-room . Realizing the need for a sound transportation system to support his hotel ventures, Flagler purchased short line railroads in what would later become known as the .

The Hotel Ponce de Leon, now part of , opened on , and was an instant success. This project sparked Flagler's interest in creating a new "American Riviera." Two years later, Flagler expanded his Florida holdings. He built a railroad bridge across the to gain access to the southern half of the state and purchased the Hotel Ormond, just north of Daytona. His personal dedication to the state of Florida was demonstrated when he began construction on his private residence, Kirkside, in St. Augustine.

Flagler completed the 1,100-room on the shores of Lake Worth in Palm Beach and extended his railroad to its service town, West Palm Beach, by 1894. The Royal Poinciana Hotel was at the time the largest wooden structure in the world. Two years later, Flagler built the Palm Beach Inn (renamed Breakers Hotel Complex in 1901) overlooking the Atlantic Ocean in Palm Beach.

Flagler originally intended for West Palm Beach to be the terminus of his railroad system, but during 1894 and 1895, severe freezes hit the area, causing Flagler to rethink his original decision. Sixty miles south, the town today known as Miami was reportedly unharmed by the freeze. To further convince Flagler to continue the railroad to Miami, he was offered land in exchange for laying rail tracks from private landowners, including , who ran a trading post on the Miami River, the Florida East Coast Canal and Transportation Company, and the Boston and Florida Atlantic Coast Land Company.

This led to the development of Miami, which was only an unincorporated area at the time. Flagler encouraged fruit farming and settlement along his railway line and made many gifts to build hospitals, churches and schools in Florida.

Flagler's railroad, the , reached by 1896. Flagler dredged a channel, built streets, instituted the first water and power systems, and financed the city's first newspaper, "The Metropolis". When the city was incorporated in 1896, its citizens wanted to honor the man responsible for its growth by naming it "Flagler". He declined the honor, persuading them to use an old Indian name, "". In 1897, Flagler opened the exclusive Royal Palm Hotel there. He became known as the Father of Miami, Florida.

Flagler's second wife, the former Ida Alice Shourds, had been institutionalized for mental illness since 1895. In 1901, the passed a bill that made incurable grounds for , opening the way for Flagler to remarry. Judge Minor S. Jones of Florida's 7th Judicial Circuit presided over the divorce. On of that year, Flagler married his third wife, Mary Lily Kenan, and the couple soon moved into their new Palm Beach estate, Whitehall, a 55-room Beaux Arts home designed by the New York-based firm of , who had designed the New York Public Library and the Pan American Exposition, which were built in the same year as Whitehall. Built in 1902 as a wedding present to Mary Lily and Florida's first , Whitehall was the 60,000 square foot (5,600 m²), winter retreat that established the Palm Beach "Season" for the wealthy of America's .

By 1905, Flagler decided that his Florida East Coast Railway should be extended from Biscayne Bay to Key West, a point convert|128|mi|km past the end of the Florida peninsula. At the time, Key West was Florida's most populous city and it was also the United States' closest deep water to the that the U.S. government proposed to build in . Flagler wanted to take advantage of additional trade with and as well as the increased trade with the west that the would bring. In 1912, the Florida Overseas Railroad was completed to Key West. Over thirty years, Flagler had invested roughly fifty million dollars between railroad, home, and hotel construction, not to mention the aid he gave suffering farmers after the 1894 freeze. When asked about his philanthropic efforts by the President of in Winter Park, Flagler is reported to have replied, "I believe this state is the easiest place for many men to gain a living. I do not believe any one else would develop it if I do not...but I do hope to live long enough to prove I am a good business man by getting a dividend on my investment." [Chandler, David. "Henry Flagler: The Astonishing Life and Times of the Visionary Robber Baron who Founded Florida"(New York: Macmillan Publishing Company, 1986)]

In 1913, Flagler fell down a flight of stairs at Whitehall. He never recovered from the fall and died in Palm Beach of his injuries on at 83 years of age. He was buried in St. Augustine alongside his daughter, Jenny Louise and first wife, Mary Harkness. Only his son Harry survived of the three children by his first marriage in 1853 to Mary Harkness.

When looking back at Flagler's life after his death on May 20, 1913, George W. Perkins, of , reflected, "But that any man could have the genius to see of what this wilderness of waterless sand and underbrush was capable and then have the nerve to build a railroad here, is more marvelous than similar development anywhere else in the world." [Moffet, Samuel. "Henry Morrison Flagler" "The Cosmopolitan; a Monthly Illustrated Magazine" (1902) APS Online]

There is a to him on in , and is named after him in St. Augustine. and are also named for him. Whitehall, Palm Beach, is open to the public as the Henry Morrison Flagler Museum; his private railcar No. 91 is preserved inside a Beaux Arts pavilion built to look like a 19th Century railway palace.

The , also known as the Key West Extension of the , was heavily damaged and partially destroyed in the . The Florida East Coast Railway was financially unable to rebuild the destroyed sections, so the roadbed and remaining bridges were sold to the State of Florida, who built the to Key West, using much of the remaining railway .