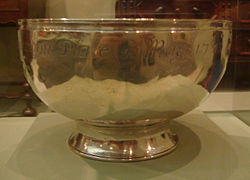 The Annapolis Subscription Plate, awarded to the racehorse Dungannon in 1743. Collection of the Baltimore Museum of Art.

The Dixie Stakes is an American Thoroughbred horse race held annually in mid May at Pimlico Race Course in Baltimore, Maryland. Frequently referred to as the Dixie Handicap, it is the eighth oldest graded stakes race in the United States and the oldest stakes race in Maryland and all of the Mid-Atlantic states. The race is open to horses, age three and up, willing to race one and one-eighth miles on the turf. Currently a Grade II stakes race with a purse of $250,000, at one time the Dixie was a very important race that drew the top horses from across North America.

First run as the "Dinner Party Stakes" when Pimlico Race Course opened in 1870, it was named for the 1868 dinner party in Saratoga, New York where Maryland Governor Oden Bowie and others met and wagered, resulting in the building of the Pimlico race course for thoroughbred race horses.[1]

The inaugural event was won by Preakness for whom the Preakness Stakes would be named. In 1871 it was called the Reunion Stakes and was won in a walkover by Harry Bassett. Suspended in 1888, in 1924, William P. Riggs, Maryland Jockey Club secretary, revived the Dixie Stakes.

The winner of the Dixie Stakes is presented one of the most revered trophies in American thoroughbred horseracing, a replica of the oldest trophy in North America, the Annapolis Subscription Plate. That replica, "The Dungannon Bowl", is a perpetual trophy given annually to the winner of the Dixie Stakes, the oldest stakes race run in Maryland and the Mid-Atlantic states.[3]

Run for many years as the Dixie Handicap, in 1965 it was raced in two divisions at a mile and a half. Or et Argent won the first division in a course record time of 2:30.20. A few minutes later, Flag won the second division, smashing Or et Argent's record with a clocking of 2:29.00.

Most wins by an owner:

Most wins by a jockey:

Most wins by a trainer:

Winners of the Dixie Stakes since 1870

A # designates that the race was run in two divisions in 1965.
** In 1971 Fort Marcy finished first but was disqualified and placed fourth. A @ indicates that this race was run at Laurel Park Racecourse from 1915 to 1919 as the Dixie Handicap.

From 1915 through 1918, Laurel Park Racecourse hosted a Dixie Handicap. The winners were: