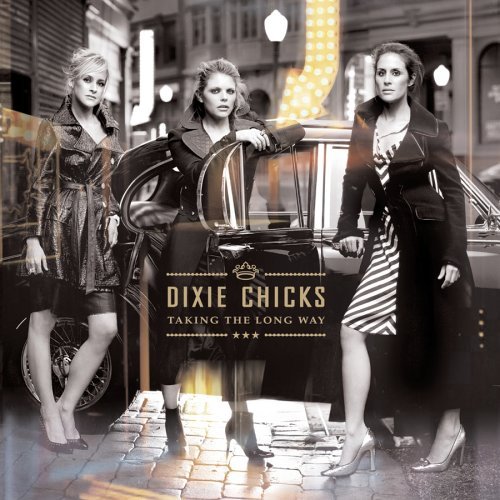 "Taking the Long Way" is the multiple -winning seventh by the American country/rock female band . It was released on , in the U.S. and on , worldwide. The album debuted at #1 on both the United World Chart and the . It sold over 2 million copies in the U.S., being certified 2x platinum by the RIAA as of , . It won 5 Awards, including in February 2007.

The first song released from the album was the "" on September 2005. The song received its debut performance on the "" on , and was later made available as a single with proceeds to benefit the relief.

The first physical single from the album, "", was released in March 2006. On , , the whole album was leaked onto various file sharing mediums.

"Taking the Long Way" was the first studio album the band released since the controversy that erupted over them in 2003 following ' remarks critical of . The controversy and the Chicks' reaction to it is the major theme at the first tracks of the album.

The first track is "The Long Way Around" which is a manifesto to non-conformity, presented with allusions to ' "Wasn't Born to Follow" as well as the Chicks' own "Long Time Gone" and "Top of the World". The second track is "Easy Silence", a testimonial to the protagonist's husband, who affords her an island of quiet companionship and love in the midst of turmoil. The third track, and first single, "Not Ready to Make Nice", offers an angry statement of purpose and resolve. The fourth track "Everybody Knows" is a return to the classic Chicks sound, but enmeshed in an aura of vulnerabilities and ambivalences.

Closing track "I Hope", is a song written with for the victims of and it was first performed on the "" telethon in 2005. The song features a guitar solo from John Mayer.

The song "Lubbock or Leave It" roused the "Trouble in the Henhouse" from fellow Lubbockite .

Selections from the album were prominently featured in the Chicks' subsequent , which included an unprecedented number of Canadian dates. A lot of the album tracks are featured in the Dixie Chicks , "", alongside 3 non-album cuts; "The Neighbor", "Baby Love" and "Whatever It Takes".

The Neighbor was later released as a stand-alone single single, in support of the rockumentary "".

On , , the album took three number two spots of the "" magazine. It was number one on the Hot Country Albums, Top Digital Albums, and on the chart, going Gold in its first week with 526,000 units sold. [ [http://www.chicagotribune.com/news/nationworld/chi-0606010183jun01,1,6901929.story?coll=chi-newsnationworld-hed] Dead link|date=March 2008] The second week, the album stayed in the top spot while taking a 48% decline, selling 271,000 units and bringing the album sales total to 797,000 units. [ [http://www.billboard.com/bbcom/news/article_display.jsp?vnu_content_id=1002649081 Dixie Chicks Retain Lead On Billboard 200 ] ] In its third and fourth weeks, the album dropped to number two on the chart. During weeks five, six, and seven, the album remained as one of the top five albums in the country. During its eighth week, due to several high-profile new releases, the album was pushed out of the top ten to number eleven. However, on week nine, the album bounced back into the top ten. The album has sold 2,290,489 copies in the US as of , .

In Canada, the album was a huge success, staying on the top of the album charts for 4 weeks and 18 weeks on the country album charts. It has sold 292,639 copies there, making it 2x platinum. [ [http://cria.ca/gold/0706_g.php Canadian Recording Industry Association (CRIA): Gold & Platinum - January 2005 ] ] At the year end charts, "Taking The Long Way" was the second best selling album of the year in Canada.

As of January 2007, "Taking the Long Way" is certified 2x platinum by the in the U.S. Many people say that the drop in album sales is due to radio airplay, or lack thereof, which is partly correct. However, a decline in album sales across the board makes up for much of the difference.

Taking The Long Way was very successful in Europe, which is never been an easy market for country music, reaching the top position in Sweden and entering in the top ten in Germany(#5), Austria (#7), Switzerland (#6), Ireland (#7), Norway (#6) and in the UK (#10), becoming their most successfull album in Europe to date.

:"The Dixie Chicks respond to their rough past few years with brass balls: This disc shows they didn't regret speaking out against the Iraq War, and Natalie Maines sounds almost punk at times. There is also a whole lot of craft -- "(Taking the) Long Way" is a widescreen pop record with gorgeous country rock, killer and fierce honky-tonk."

:"The incident", as they call it, took a commercial toll, but musically the Chicks have never been stronger. The instrumentation on their fourth album keeps a toe in country, yet the songs are the best kind of pop--smart, instantly memorable and fussed over until they sound effortless. "Not Ready to Make Nice" broadcasts their grievances, but "Bitter End" and "So Hard" (a sing-along about ) prove that complicated songwriting for the masses still flourishes."

On , "" elected "Taking the Long Way" the best album of the year according to the publication's music experts. [ [http://www.usatoday.com/life/music/reviews/2006-12-25-yir-music_x.htm Dixie Chicks, Gnarls Barkley lead the way - USATODAY.com ] ] It was declared on the newspaper that:

:"It was a calculated risk that paid off. Having alienated much of their country constituency with an ill-timed jibe at President Bush, the Chicks declined to beg for forgiveness, defiantly forging ahead with a forthright description of their situation and attitude, "Not Ready to Make Nice", and releasing it as the album's lead-off single. That alienated even more of the country base, but throngs of new fans — and the majority of "USA Today" critics — were enthralled by the stance and, more important, the rich, textured, genre-transcendent music the trio and producer Rick Rubin cooked up."

"" chose "Taking the Long Way" as one of 2006's fifteen best albums. [ [http://billboard.com/bbcom/bestreleases/index.jsp Billboard New Releases ] ] On a poll conducted by the magazine, it ranked as the third best (tied with 's "") by visitors of [ [http://billboard.com/bbcom/bestreleases/2007/poll.jsp Billboard New Releases ] ] . It was declared in the magazine that:

:"Once the darlings of country, the Chicks lost many fans — and the support of country radio — after a 2003 incident in which Natalie Maines made a relatively innocuous comment about President Bush from a London stage. The group has finally re-emerged stronger, more defiant and more creatively ambitious than ever. The first-time pairing with Rubin has resulted in a surprisingly cohesive mix of country and rock tunes, including co-writes with Sheryl Crow and Neil Finn. While many former fans remain critical of the group for its outspoken political views — an apparent no-no in country music — tracks like "The Long Way Around", "Everybody Knows", "I Hope" (highlighted by a John Mayer guitar solo) and the chillingly sad "Voice Inside My Head" are sure to earn the group at least some of its fans back."

On , , the first single released from the album, "", was nominated for the in two categories ( and ). On 2006, it lost both awards to the and , respectively.