Daniel Dodd "Dan" Wilson (born May 20, 1961 in Minneapolis, Minnesota) is a multi-instrumentalist, vocalist, Grammy-winning songwriter and producer. He is both a solo artist and the lead singer of the band Semisonic, for which he wrote the hits "Secret Smile," "Closing Time," and "Chemistry." He was nominated for the Grammy Award for Best Rock Song in 1999 for "Closing Time," which peaked at #1 on the Modern Rock Chart and #6 in the Top 40 Chart overall. Wilson was also a member of Trip Shakespeare from the mid-1980s to early 1990s and of college bands Animal Dance, The Love Monsters and The Floating World in the early 1980s.[1]

Wilson is perhaps best known currently for his co-writing and collaborations with other artists. He contributed three songs to the album 21 by UK singer songwriter Adele, including the hit single "Someone Like You" which he also co-produced. The song has been #1 in the U.S., the U.K., Australia, and New Zealand and is currently #3 worldwide. Wilson co-wrote six songs for the Josh Groban album Illuminations, including the first single "Hidden Away." Wilson co-wrote six songs with the Dixie Chicks for their 2006 album Taking the Long Way, which garnered the coveted Album of the Year at the 2007 Grammy Awards. Wilson was the recipient of the 2007 Grammy Award for Song of the Year for "Not Ready to Make Nice," one of the songs he co wrote with the Dixie Chicks.

Wilson's critically acclaimed first solo album Free Life was released on October 16, 2007. He produced the album himself, with renowned music guru Rick Rubin serving as executive producer and writing the liner notes. The eponymous title track, "Free Life," was featured in a number of American television programs. Wilson is currently working on his second solo album.

When asked to describe who he sounds like, he notes "I hope I sound like Neil Young, Sea Change by Beck, Iron and Wine. I know I sound like Semisonic (can't help that!), Beatles but trying not to. I've been listening to a lot of Louis Armstrong lately, somehow that's going to seep into my songwriting."[2]

Dan is married to Diane Espaldon,[3] and has two daughters - Corazon or "Coco", born in 1997,[4] and Lily, adopted from the Philippines at age 2 in 2009.[5] Wilson attended Harvard University where he majored in visual arts (sculpture). He had a successful painting career, represented by Thomas Barry Fine Arts, with his works in numerous private and corporate collections. He set his painting aside in the late 1990s to focus on music. His brother is musician Matt Wilson (musician) of the band The Twilight Hours, whom he also played with in Trip Shakespeare. 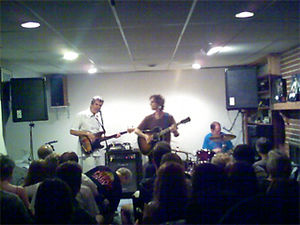