The Black Rhinoceros or Hook-lipped Rhinoceros (Diceros bicornis), is a species of rhinoceros, native to the eastern and central areas of Africa including Kenya, Tanzania, Cameroon, South Africa, Namibia, Zimbabwe, and Angola. Although the Rhino was referred to as black, it is actually more of a grey/brown/white color in appearance.

The other African rhinoceros is the White Rhinoceros (Ceratotherium simum). These common names are misleading, as those two species are not really distinguishable by color. The word white in the name "White Rhinoceros" is a mistranslation of the Dutch word wijd for wide, referring to its square upper lip, as opposed to the pointed or hooked lip of the Black Rhinoceros. These species are now sometimes referred to as the Square-lipped (for White) or Hook-lipped (for Black) Rhinoceros.

There are four recognized subspecies of the black rhinoceros:[3] 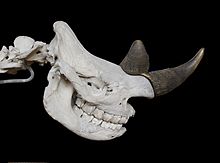 The longest known horn measured nearly 1.5 m (4.9 ft) in length.[7] Sometimes, a third smaller horn may develop. These horns are used for defense, intimidation, and digging up roots and breaking branches during feeding. Skin color depends more on local soil conditions and the rhinoceros' wallowing behavior than anything else, so many black rhinos are typically not truly black in color. The Black Rhino is smaller than the White Rhino, and has a long, pointed, and prehensile upper lip, which it uses to grasp leaves and twigs when feeding.[7] White Rhinoceros have square lips used for eating grass. The Black Rhinoceros can also be recognized from the White Rhinoceros by its smaller skull and ears.

Their thick layered skin protects the rhino from thorns and sharp grasses. Their skin harbors external parasites, such as mites and ticks, which are eaten by oxpeckers and egrets that live with the rhino. Such behaviour was originally thought to be an example of mutualism, but recent evidence suggests that oxpeckers may be parasites instead, feeding on rhino blood.[8] Black rhinos have poor eyesight, relying more on hearing and smell. Their ears possess a relatively wide rotational range to detect sounds. An excellent sense of smell alerts rhinos to the presence of predators.

For most of the 20th century the continental black rhino was the most numerous of all rhino species. Around 1900 there were probably several hundred thousand[2] living in Africa. During the latter half of the 20th century their numbers were severely reduced from an estimated 70,000[9] in the late 1960s to only 10,000 to 15,000 in 1981. In the early 1990s the number dipped below 2,500, and in 2004 it was reported that only 2,410 black rhinos remained. According to the International Rhino Foundation, the total African population had recovered to 4240 by 2008 (which suggests that the 2004 number was low).[10] In 2002 only 10 West African Black Rhinos remained in Cameroon, and in 2006 intensive surveys across its putative range failed to locate any, leading to fears that this subspecies is extinct.[5] In 2011 the IUCN declared the Western Black Rhino extinct.[11]

The only rhino that has recovered somewhat from the brink of extinction is the southern white whose numbers now are estimated around 14,500, up from fewer than 50 in the first decade of the 20th century.[12]

The Black Rhinoceros had been pushed to the brink of extinction by illegal poaching for their horn, and to a lesser extent by loss of habitat. A major market for rhino horn has historically been in the Middle East to make ornately carved handles for ceremonial daggers called jambiyas. Demand for these exploded in the 1970s causing the Black Rhinoceros population to decline 96% between 1970 and 1992. The horn is also used in traditional Chinese medicine, and is said by herbalists to be able to revive comatose patients, cure fevers, and aid male sexual stamina and fertility.[13] The purported effectiveness of the use of rhino horn in treating any illness has not been confirmed by medical science. In June 2007, the first-ever documented case of the medicinal sale of black rhino horn in the United States (confirmed by genetic testing of the confiscated horn) occurred at a traditional Chinese medicine supply store in Portland, Oregon's Chinatown.[13] 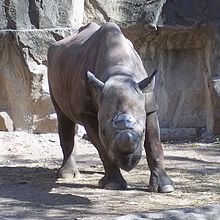 Although they are typically solitary animals, with the exception of coming together to mate, mothers and calves will sometimes congregate in small groups for short periods of time. Males are not as sociable as females, although they will sometimes allow the presence of other rhinos. They are not very territorial and often intersect other rhino territories. Home ranges vary depending on season and the availability of food and water. Generally they have smaller home ranges and larger density in habitats that have plenty of food and water available, and vice versa if resources are not readily available. In the Serengeti home ranges are around 43 to 133 km2 (17 to 51 sq mi), while in the Ngorongoro it is between 2.6 to 44 km2 (1.0 to 17 sq mi). Black Rhinos have also been observed to have a certain area they tend to visit and rest frequently called "houses" which are usually on a high ground level.[citation needed]

The Black Rhino has a reputation for being extremely aggressive, and charges readily at perceived threats. They have even been observed to charge tree trunks and termite mounds.[citation needed] Black Rhinos will fight each other, and they have the highest rates of mortal combat recorded for any mammal: about 50% of males and 30% of females die from combat-related injuries.[14] Adult Black Rhinos normally have no natural predators,[15] but they may fall prey to crocodiles in exceptional circumstances.[16]

Black Rhinoceros follow the same trails as elephants use to get from foraging areas to water holes. They also use smaller trails when they are browsing. They are very fast and can get up to speeds of 56 kilometres per hour (35 mph) running on their toes.

The Black Rhinoceros is a herbivorous browser that eats leafy plants, branches, shoots, thorny wood bushes, and fruit.[17] Their diet can reduce the amount of woody plants, which may benefit grazers (who eat grass), but not competing browsers. It has been known to eat up to 220 species of plants. It can live up to 5 days without water during drought. Black Rhinos live in primarily grasslands, savannas, and tropical bushland habitats.

They browse for food in the morning and evening. In the hottest part of the day they are most inactive- resting, sleeping, and wallowing in the mud. Wallowing helps cool down body temperature during the day and protects against parasites. If mud is not available rhinos will wallow in dust. Drinking water is most common in the afternoon. When Black Rhinos browse they use their lips to strip the branches of their leaves.

Rhinos use several forms of communication. Due to their bad eyesight and solitary nature, scent marking is often used to identify themselves to other Black Rhinos. Urine spraying occurs on trees and bushes, around water holes and feeding areas. Females urine spray more often when receptive for breeding. Defecation sometimes occurs in the same spot used by different rhinos, such as around feeding stations and watering tracks. Coming upon these spots, rhinos will smell to see who is in the area and add their own marking. Less commonly they will rub their heads or horns against tree trunks to scent-mark.

Different types of vocalizations have also been observed. Growls and trumpets may be used during a fight. A long snort indicates anger, while sneeze-like calls are used as an alarm to danger. Short snorts with pricked ears and wrinkled nostrils are a startle reaction to a newcomer. A high-pitched "wonk" has been described for when they are fearful. A high-pitched scream has been observed in times of terror. "Mmwonk", a deep, resonant sound is a sign of contentment. Squeak, done with different tones and intonations may mean "I'm lost", "Where are you?", "I'm over here", or other signals that are not yet understood. Breathing speeds can be used to communicate greetings, anxiety, and reassurance. A puffing snort is a common greeting when males and females encounter one another.

Body language also a form of Black Rhinoceros communications. A bull will sometimes display an aggressive ritual towards a potential rival. They will smell, spray repeatedly, scrape, trample, and bash with their heads in bushes. They may also snort in an attack posture. When their tail is up, it may indicate one of several things: curiosity, alarm, or sexual receptivity. Erect ears also indicate curiosity, and flat ears express anger.

The adults are solitary in nature, coming together only for mating. Mating does not have a seasonal pattern but births tend to be towards the end of the rainy season in more arid environments.

When in season the females will mark dung piles. Males following females that are in season will follow her; when she defecates he will scrape and spread the dung, making it more difficult for any other adult males to pick up her scent trail.

Courtship behaviors before mating include snorting and sparring with the horns among males. Another courtship behavior is called bluff and bluster, where the rhino will snort and swing its head from side to side aggressively before running away repeatedly. Breeding pairs stay together for 2–3 days and sometimes even weeks. They mate several times a day over this time and copulation lasts for a half an hour.

The gestation period is 15 to 16 months. The single calf weighs about 35–50 kg at birth, and can follow its mother around after just three days. Weaning occurs at around 2 years of age for the offspring. The mother and calf stay together for 2–3 years until the next calf is born; female calves may stay longer, forming small groups. The young are occasionally taken by hyenas and lions. Sexual maturity is reached from 5–7 years old for females, and 7–8 years for males. The life expectancy in natural conditions (without poaching pressure) is from 35–50 years.[6]