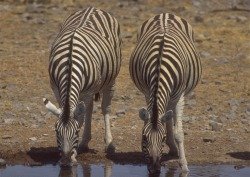 Equidae is the family of horse-like animals, which belong to the order . It is sometimes known as the horse family. Apart from the , other extant equids include assorted subspecies of or ass, and the s. All of these are in the "Equus".

Equids are medium to large s, with long heads, and necks with a mane. Their legs are slender and end in a single, toe, protected by a horny hoof. They have long, slender, tails, either ending in a tuft, or entirely covered in flowing hair. They are adapted to generally open terrain, from and s, to mountains or s.The pinnae ("ears") of equids are mobile, enabling them to easily localise the origin of sounds. They have two-color, or dichromatic vision. Their eyes are set back far on the head, giving them a wide angle of view, without entirely losing . Equids also have a , that allows males to use the , or 'lip-curling' response to assess the sexual state of potential mates.

Equids are s, and feed predominantly on tough, fibrous food, such as es and sedges. When in need, they will also eat other vegetable matter, such as leaves, fruits, or bark, but are normally s, not browsers. Unlike s, with their complex stomachs, equids break down in the "hindgut" or , a part of the . Their dentition is almost complete, with cutting s to crop food, and grinding set well back behind a diastema. The dental formula for equids is:dentition2|3.1.3-4.3|3.1.3.3

Equids are social animals, living in herds or bands. Horses, along with Plains and Mountain Zebras, have permanent herds generally consisting of a single male and a band of females, with the remaining males forming small "bachelor" herds. The remaining species have temporary herds, lasting only a few months, which may be either single-sexed or mixed. In either case, there are clear hierarchies established amongst the individuals, usually with a dominant female controlling access to food and water resources and the lead male controlling mating opportunities.

Females, usually called mares in horses and zebras, or, in the case of asses and donkeys, jennys, usually bear a single , after a gestation period of approximately 11 months. Young equids are able to walk within an hour of birth, and are weaned after four to thirteen months (animals living in the wild naturally wean foals at a later date than those under ). Depending on species, living conditions and other factors, females in the wild may give birth every year or every other year.

Equids who are not in foal generally have a seasonal , from early spring into autumn. Most females enter an "anestrus" period during the winter and thus do not cycle in this period. The reproductive cycle is controlled by the photoperiod (length of the day), with estrus triggered when the days begin to lengthen. Anestrus prevents the female from conceiving in the winter months, as that would result in her foaling during the harshest part of the year, a time when it would be more difficult for the foal to survive. [Ensminger, M. E. "Horses and Horsemanship: Animal Agriculture Series." Sixth Edition. Interstate Publishers, 1990. ISBN 0-8134-2883-1 p. 156] However, equids who live near the , where there is less change in length of day from season to season, have no anestrus period, at least in theory. [ [http://www.vetmed.lsu.edu/eiltslotus/theriogenology-5361/abberations_2.htm Eilts, Bruce E. "Aberrations of the Equine Estrous cycle," Louisians State University school of Veterinary Medicine, last modified 15 August 2007. Web page accessed November 21, 2007] ] Further, for reasons that are not clear, about twenty percent of domestic mares in the Northern Hemisphere will cycle the year round. ["Id.]

The oldest known equid s date from the early , 54 million years ago. This species, "" (formerly known as "Eohippus"), was a fox-sized animal with three toes on its hind feet, and four on the front feet. It was herbivorous browser on relatively soft plants, and already adapted for running. The complexity of its brain suggests that it was already an alert and intelligent animal. [cite book |editor=Palmer, D.|year=1999 |title= The Marshall Illustrated Encyclopedia of Dinosaurs and Prehistoric Animals|publisher= Marshall Editions|location=London|pages= 255|isbn= 1-84028-152-9] Later species reduced the number of toes, and developed teeth more suited for grinding up grasses and other tough plant food.

The group became relatively large during the , with many new species appearing. By this time, equids were more truly horse-like, having developed the typical body shape of the modern animals. Many of these species bore the main weight of their bodies on their central, third, toe, with the others becoming reduced, and barely touching the ground, if at all. The surviving modern genus, "Equus", had evolved by the early , and spread rapidly though the world.

Any equid with partial zebra ancestry is also called a .