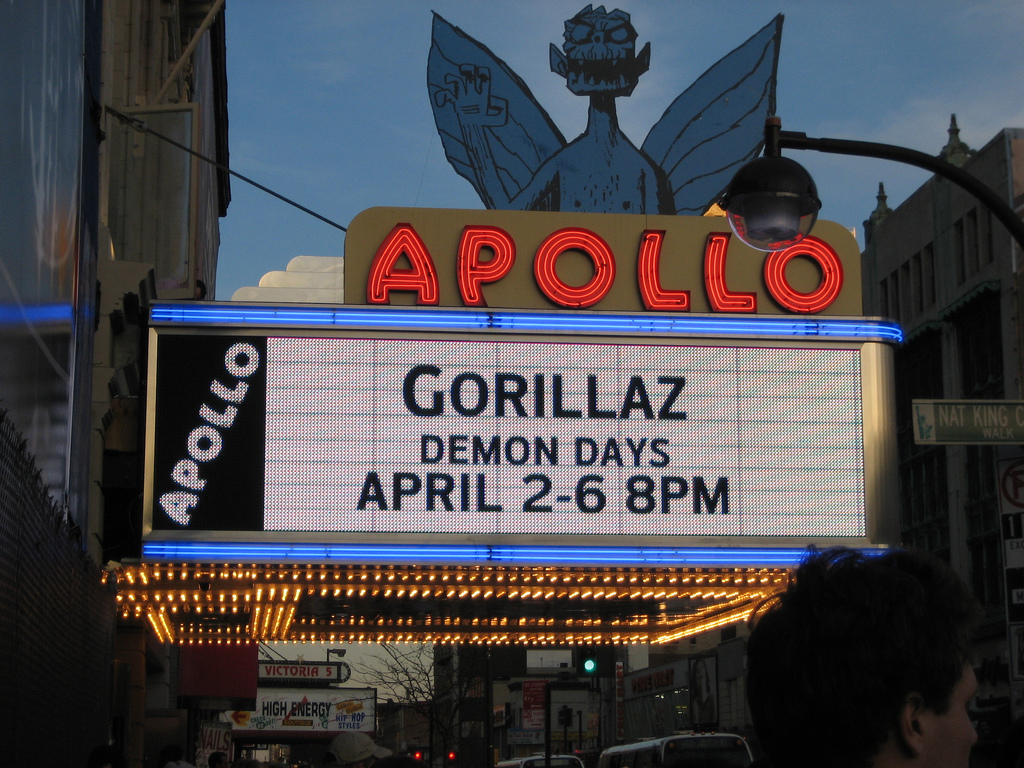 An Apollo Hall was founded in NY in the mid-1860s by former Civil War General as a dance hall and ballroom. Upon the expiration of his lease in 1872, the building was converted to a theater, which closed shortly before the turn of the century. However, the name "Apollo Theater" lived on. The Apollo was designed by the architect George M. Kaiser, who also patterned the at 79th Street and Broadway.

Founded in 1913 in a different location, the new Apollo Theater was owned by various Jewish families up until . When the Apollo first opened, it was one of ’s leading burlesque venues, opened and operated by two of the city’s most influential operators &mdash; and . Open to white-only viewers, the Hurtig and Seamon’s (New) Burlesque Theater would remain in operation until 1928 when took over and transformed it into the 125th Street Apollo Theater. , a powerful theatrical landlord, purchased the Apollo in 1932 upon Minsky’s untimely death. The Apollo Theater finally opened its doors to African-American patrons in 1934, 20 years after the building's original opening, showcasing "a colored review" entitled "".

made her singing debut at seventeen on November 21, 1934 at the Apollo. Fitzgerald's name pulled in a weekly audience at the Apollo and she won the opportunity to compete in one of the earliest of its "Amateur Nights". She had originally intended to go on stage and dance, but intimidated by the Edwards Sisters, a local dance duo, she opted to sing instead, in the style of Connie Boswell. She sang 's "Judy" and "The Object of My Affection", a song recorded by the , and won the first prize of 25.00.

One unique feature of the Apollo was "the executioner"" a man with a broom who would sweep performers off the stage if the highly vocal and opinionated audiences began to call for their removal.

The theater is located at 253 W. 125th Street in Harlem in what is now one of the best-known black neighborhoods in and probably in all of the United States. When the Apollo re-opened in 1934, the area around 125th Street was a transitional neighborhood. In the decades before the Apollo, the theater had catered to white audiences with white shows featuring burlesque. When and his partner, Morris Sussman, reopened the Apollo on January 26, 1934, they published an ad in the "New York Age" which referred to the Apollo as "the finest theater in Harlem".

The first show was called "Jazz a la Carte". All the proceeds of this show were donated to the Harlem Children's Fresh Air Fund.

The song "I May Be Wrong (But I Think You're Wonderful)" by Harry Sullivan and Harry Ruskin, written in 1929, became the theme song of the theater.

The Apollo grew to prominence during the of the pre- years. In 1934, it introduced its regular Amateur Night shows hosted by Ralph Cooper. Billing itself as a place "where stars are born and legends are made," the Apollo became famous for launching the careers of artists such as , , James Brown, & , , , , , , , , , , , , and . The Apollo also featured the performances of old-time favorites like Tim Moore, , , Dewey "Pigmeat" Markham, , , and .

The club fell into decline in the 1960s and 1970s, but was revived in 1983, when it obtained federal, state, and city landmark status. It fully reopened in 1985. , produced by former actor , performed at a fiftieth anniversary show at the Apollo in 1985. In 1991, the Apollo was purchased by the in 1991. It is now run by a nonprofit organization, the Apollo Theater Foundation Inc., and draws an estimated 1.3 million visitors annually. In 2005, and released an album "Live at the Apollo" in honor of the Harlem music scene.

It is the home of "", a nationally syndicated variety show consisting of new talent.

On December 15, 2005, the Apollo Theater launched the first phase of its refurbishment, costing estimated $65 million. The first phase included the facade and the new (LED) marquee. Attendees and speakers at the launch event included President , New York Mayor and CEO .

To date, the Apollo renovation is America's most expensive and advanced refurbishment of a landmark theater.

On December 28, 2006, the body of ("Soul Brother #1"), who had died a few days before, was displayed at the Apollo Theater as a memorial to his life and career. The memorial was covered heavily by both television and print media. This tribute to Brown once again brought the legendary Harlem theater back into the public spotlight.

* intro theme for the 6th (1989) and 7th (1990) seasons shows pictures of the Apollo in the background.
* makes a reference to the Apollo in his song "Walk On The Wild Side".
* references the theater in his songs, "Crossing the Boundary" and "You Never Know."
*The song "Without Love," from the Broadway musical "Hairspray", contains the line, "Without love, life is at the Apollo."
*In the Broadway production of "", the Apollo theater is where the Dreamettes enter a talent competition.
*In the "" episode, "", crustacean is grown to giant size and wreaks vengeful havoc on New New York. When he reaches the "famed Apollo Theatre" (his words), Zoidberg angrily yells, "Boo me off stage on Open Mic night, huh? I'll show you!!" and then kicks it to pieces.
*Substantial parts of the film "Down to Earth" featuring take place at the Apollo.
*In one "" episode, -- who on his show usually changes "C's" to "K's"-- held his unfortunately titled Krusty Komedy Klassic () at the Apollo Theater.
* did a segment setting a spelling bee at the Apollo.
* won the first place prize in an amateur musician contest here in 1964.
* Episodes of the television show "" featured the Apollo Theater.
*A battle between the Hulk and the Abomination in "The Incredible Hulk" takes place outside the theater. [cite news | author = Shawn Adler | title = 'Incredible Hulk' Trailer: Shot-By-Shot Analysis Shows Green Guy Has Control Issues | publisher = | date = | url = http://www.mtv.com/movies/news/articles/1583271/20080312/story.jhtml | accessdate=2008-03-13]
*The band has a song on their album "" entitled "It's Amateur Night at the Apollo Creed".
* Comedian claimed needed to take his racist diatribe to the Apollo.