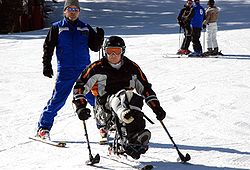 A veteran skis on his monoski at Vail, Colorado

Paralympic alpine skiing is an adaptation of alpine skiing for athletes with a disability. Paralympic alpine skiing is one of the sports in the Paralympic Winter Games. It is governed by the International Paralympic Committee (IPC) under the auspices of the International Ski Federation (FIS). In addition to the Paralympic Games, elite disabled ski racing includes the IPC Alpine Skiing World Championships (held every four years from 1980 to 2004 and every two years beginning in 2009) and the IPC Alpine Skiing World Cup, an annual international racing circuit. Below the World Cup level, races are held at the Continental Cup level. The Europa (or European) Cup is contested in Europe, and the Nor-Am Cup in North America; additionally, sub-World Cup-level races are also held in East Asia, Australia, New Zealand, and South America.

In 1984, giant slalom races for four categories of male standing skiers were held as a demonstration sport at the Winter Olympics. In 1988 a disabled GS was again demonstrated, this time for men and women but limited to "three-trackers" (above-knee amputees).

Ski racers with a disability compete in three different medal categories: standing, sitting, and visually impaired. Each of these groups is divided into three to seven classes, some of which are further subdivided into two or three sub-classes. Within each of the three major categories, times are compared by means of a "factor system" that attempts to put athletes with different disabilities on a level playing field with one another by multiplying the time of each racer in a given class or sub-class by a fixed number between zero and one called a factor. The result, known as "adjusted time," is the time that commonly appears on result lists for disabled ski races.

The disability categories for both alpine and nordic ski racing are as follows: