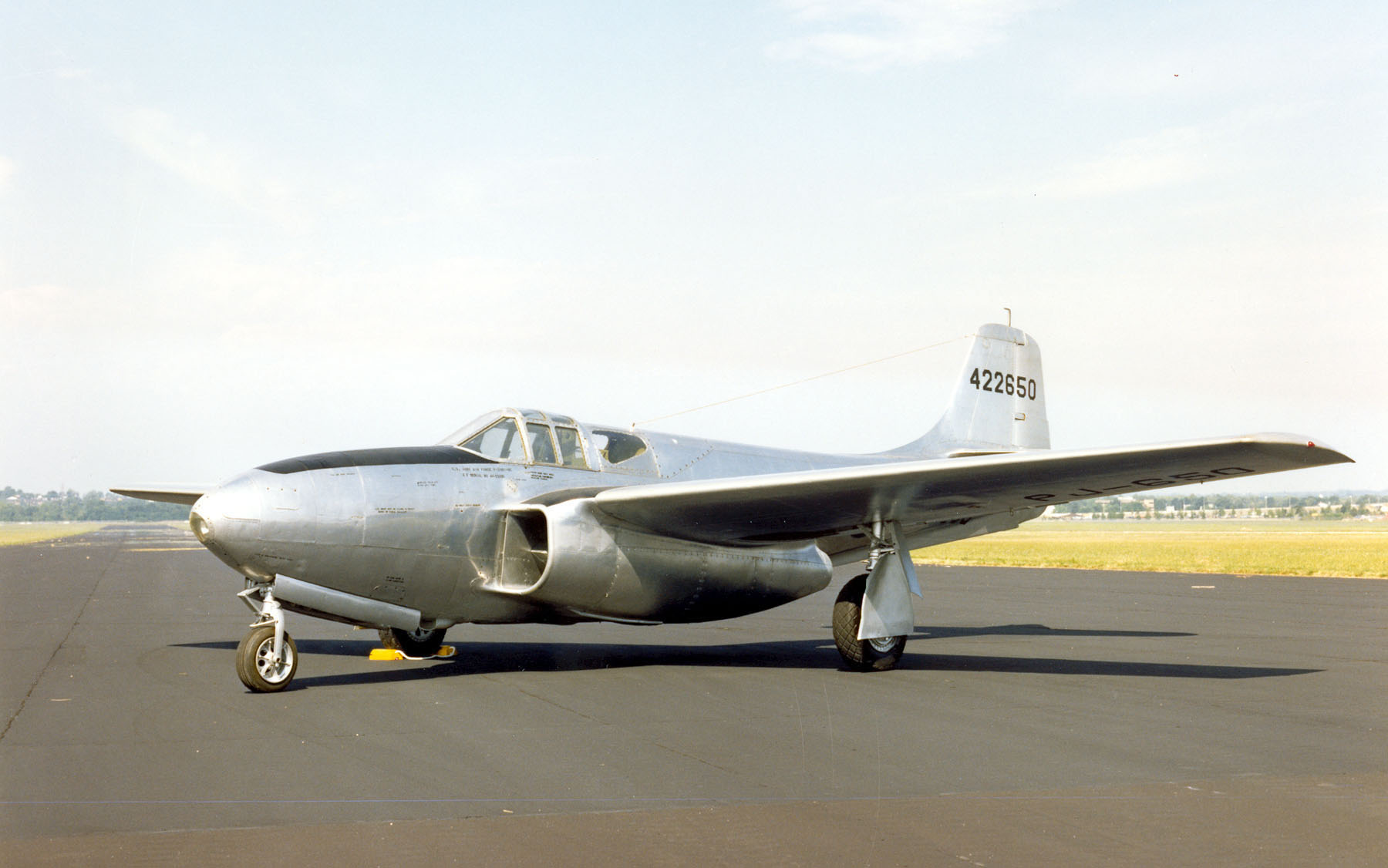 The Bell P-59A was the first jet , designed and built during . The USAAF was not impressed by its performance and cancelled the contract when fewer than half of the aircraft ordered had been produced. Although no P-59s went into combat, it paved the way for another design generation of U.S. turbojet-powered aircraft and was the first turbojet fighter to have its turbojet engine and inlet s integrated within the main .

Major General became aware of the 's jet program when he attended a demonstration of the in April 1941. The subject had been mentioned, but not in depth, as part of the the previous year. He requested, and was given, the plans for the aircraft's powerplant, the Power Jets W.1, which he took back to the US. On , he offered the U.S. company , a contract to produce an American version of the engine. On the following day, he approached , head of Bell Aircraft Corporation, to build a fighter to utilize it. Bell agreed and set to work on producing three prototypes. As a tactic, the USAAF gave the project the designation P-59A, to suggest it was a development of a completely unrelated Bell XP-59 fighter project that had been cancelled. The design was finalized on , and construction began. In March, long before the prototypes were completed, an order for 13 YP-59A pre-production machines was added to the contract.

On , the first XP-59A arrived at Muroc Army Air Field (today, ) in for testing. While being handled on the ground, the aircraft was fitted with a dummy to disguise its true nature. The aircraft first became airborne during high-speed tests on with Bell test pilot at the controls, although the first official flight was made by Col the next day. Over the following months, tests on the three XP-59As revealed a multitude of problems including poor engine response and reliability (common shortcomings of all early turbojets), insufficient lateral stability [Green] , and performance that was far below expectations. flew the aircraft and was dissatisfied with the speed, but was amazed at the smooth flying. Nevertheless, even before delivery of the YP-59As in June 1943, the USAAF ordered 80 production machines, designated P-59A Airacomet.

The 13 service test YP-59As had a more powerful engine than its predecessor, but the improvement in performance was negligible with only a five mph increase in top speed. One of these aircraft, the third YP-59A (S/n: "42-22611") was supplied to the RAF in exchange for a . British pilots found that the aircraft compared very unfavourably with the jets that they were already flying. (The YP-59A also compared unfavorably to the propeller-driven .) Two YP-59A Airacomets ("42-108778" and "42-100779") were also delivered to the U.S. Navy where they were evaluated as the YF2L-1 but quickly found completely unsuitable for carrier operations.

Faced with their own ongoing difficulties, eventually, Bell completed 50 production Airacomets, 20 P-59As and 30 P-59Bs. Each was armed with one 37 mm and 44 rounds of ammunition and three .50 cal. machine guns and 200 rounds per gun. The P-59Bs were assigned to the 412th Fighter Group to familiarize AAF pilots with the handling and performance characteristics of jet aircraft. [ [http://www.nasm.si.edu/research/aero/aircraft/bellxp.htm Bell P-59] ] While the P-59 was not a great success, the type did give the USAAF experience with the operation of jet aircraft in preparation for the more advanced types that would shortly become available. [Baugher 2006]