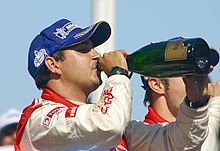 Daniel Elena (born 26 October 1972) is a Monegasque rally co-driver, currently working with Sébastien Loeb. Between them, the pair have won the World Rally Championship eight times, and currently compete with the Citroën DS3 WRC. Sixty-seven World rally wins (all of them with Loeb) make him the co-driver with the most victories in the history of the WRC.

He started rallying in 1997 as co-driver to Hervé Bernard, but became Loeb's co-driver the following season and quickly developed a strong relationship with him, winning the Citroën Saxo Trophy in 1999 and the French gravel title the following year.

In 2001, they won the FIA Super 1600 championship in their Citroën Saxo, becoming an obvious choice for Citroën's WRC team, which they made their first start for that year, going on to take their first win at Rallye Deutschland in 2002. They went on to take eight consecutive World Rally Championship titles between 2004 and 2011.

Elena is the first person to receive the Michael Park trophy, which is given yearly to the best co-driver.

Elena is married with 2 children. He and his family reside near Lausanne, Switzerland. [1]

Daniel Elena is today a member of the ‘Champions for Peace’ club, a group of 54 famous elite athletes committed to serving peace in the world through sport, created by Peace and Sport, a Monaco-based international organization.[2]