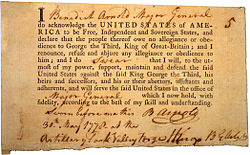 Oaths of allegiance are commonly required of newly-naturalised citizens (see Oath of Citizenship), members of the armed forces, and those assuming public (particularly parliamentary and judicial) office. Clergy in the Church of England are required to take an Oath of Supremacy acknowledging the authority of the British monarch.

A typical example of an oath of allegiance is that sworn by Members of Parliament in the Netherlands:

I swear (affirm) allegiance to the King, to the Statute for the Kingdom of the Netherlands, and to the Constitution. I swear (affirm) that I will faithfully perform the duties my office lays upon me. So help me God almighty! (This I declare and affirm)[1]

In many Commonwealth realms all that is required is an oath to the monarch, and not the constitution or state. There have been moves in some of the realms to make the oath of citizenship sworn by new citizens refer to the country rather than the monarch. However, the oaths sworn by judges, members of parliament, etc., have not been changed. In New South Wales, there are plans for MPs and ministers' oaths to be made to "Australia" rather than the Queen. All of these moves have not succeeded as the Queen is the personification of the Canadian, British, or Australian state (or that of any other Commonwealth realm). Allegiance sworn to the monarch is as same as to the country, its constitution or flag. The New Zealand Oath of Allegiance still refers to the Queen of New Zealand. The European Court of Human Rights ruled in 1999 that the oath of allegiance to a reigning monarch is "reasonably viewed as an affirmation of loyalty to the constitutional principles which support... the workings of representative democracy in the respondent State."[2]