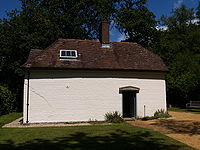 The front of Clouds Hill

Clouds Hill is an isolated cottage near Wareham in the county of Dorset in South West England. It is the former home of T. E. Lawrence ("Lawrence of Arabia") and is now run as a museum by the National Trust. 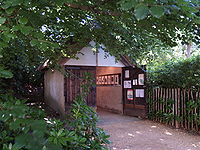 Lawrence first rented the cottage in 1923 while stationed at Bovington Camp with the Tank Corps, and he purchased it in 1925. He wrote "Nothing in Clouds Hill is to be a care upon the world. While I have it there shall be nothing exquisite or unique in it. Nothing to anchor me."

In 1935, he left the RAF and returned to live at Clouds Hill. At the age of 46, a few weeks after leaving the service, Lawrence suffered severe head injuries in a motorcycle accident close to the cottage, and died in the Bovington Camp hospital on 19 May 1935. The following year, his heir, his brother Prof. A.W. Lawrence gave Clouds Hill to the National Trust. It is now a museum, dedicated to Lawrence.

The cottage remains largely as Lawrence left it at his death. It features an exhibition detailing Lawrence's extraordinary life, and most of his original furniture and possessions. The cottage reflects his complex personality and links to the Middle East. It is open to visitors from the end of March to the beginning of October, Thursday – Sunday. 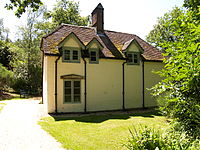 The rear of the cottage

Lawrence reserved a sleeping bag for guests and visitors who stayed overnight. In 1965 it was stolen. The bag's disappearance coincided with the release of Lawrence of Arabia, the film which popularised his story and it was thought the theft could have been inspired by the publicity and excitement generated by the film.

In 2001, the sleeping bag was returned. The Independent reported:

"The sleeping bag that served as a guest bed to some of the 20th century's most distinguished authors at TE Lawrence's weekend retreat has been returned 36 years after it was stolen. National Trust custodians of Clouds Hill, the author's cottage in Dorset, were amazed when a weather-beaten package from Belgium arrived containing the sleeping bag, along with a sheepish note that read: 'This is yours'. The bag, embroidered with the word 'tuum' ['yours'], was provided for guests at the cottage, while Lawrence slept on the floor in the other sleeping bag, marked 'meum' ['mine']. According to Jeremy Wilson, Lawrence's biographer, tuum's occupants included George Bernard Shaw, E. M. Forster and Robert Graves" [1]